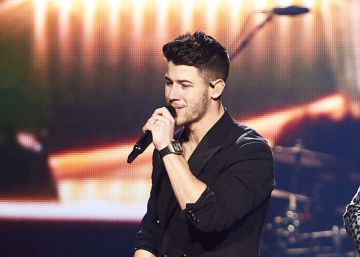 Never was a wait so tense in a WiZink on the verge of non-architectural collapse, but emotional. And record that Jonas brothers it is not that they were delayed too much, because 23 minutes late do not scare anyone in this country, but since 21.15 any movement or indication of activity on stage was greeted with a deafening screaming and exalted spirits. That is why, when the neons lit up and the giant screens shot the first retrospective images of some still infant Jonas, the throats entered into an incandescence only sharpened – and never better said – when Joe, Kevin and Nick descended on a platform above the epicenter Scenic, such that fallen from the sky. And 15,000 voices disabling themselves in unison to faith that are a good Sunday shake for any eardrum.

The world already had many things to worry about in 2019 when it was announced the return of the Jonas Brothers, who had not been locked up in a recording studio for a decade and who hardly anyone expected or seemed to miss. False. Disney’s idols are now good-looking youngsters and musical solvency superior to that of their years of acne and unbridled hormones, but there was an eager audience for the reunion or, rather, receptive to the first crush. Because the crowd that crammed to the last corner of the Madrid pavilion was largely younger than the three protagonists, immersed in the crisis of the thirties. And with a female majority as overwhelming as if we converted the Spain-Malta marker into a proportion.

The songs are nice, even sometimes good, but as predictable as a desktop TV

The Brothers have done well the family reunification play, to the point that the single Sucker He catapulted them for the first time until number 1 and placed in the Grammy pool. But the Jonas have at this point some band of accompaniment of the little brother. They share blood, but they don’t practice parity. Nick grabs looks and leading roles while Kevin assumes with resignation his subsidiary condition and Joe, who tears an acoustic and barely opens his mouth in some choir, seems rather placed by the City Council. The order of forces and ambitions that was always intuited, only that with the adult ages we all left ourselves with dissimulation and paripés.

In the background, the leadership of the baby cherub suits the fraternal trio, complemented by six of those accompanying musicians who crouch in the background so as not to steal a frame of prominence. Nick is the most photogenic, the only one a little unplugged, the one already in Cool It shows that nature endowed him with at least one attractive falsetto. But neither the graceful faces nor the vicaries nor the mature age have served those in New Jersey to assume the least artistic risk on their return. The brotherhood is still clinging to that kind of millimeter repertoire, hyperproduced and more attentive to the damn algorithms than to the heart, and let’s not say the viscera anymore.

This means that the songs are nice, even sometimes good, but as predictable as a desktop TV. Only human, for example, includes some milligram of reggae and it ends up being cool, because a little Jamaican aroma always suits the body. But everything is so calculated and measured that at certain times the bros they crouch us in a synchronized way. It does not seem the sexiest or acrobatic gesture, not even the most aerobic, but it is greeted with the fervor of anyone attending a new world pole vault record.

Nor can we deny good deeds to Strangers, pristine pop with a high treble chorus. Or to What a Man Gotta Do, which seems to explore the heritage of Faithby George Michael. But the swim reaches irritating extremes in Fly with me, and we did not find reasons for excitement with Used to Be: r’n’b manual, which we have already heard a few million times. As much as Kevin takes the opportunity to keep only a basic white T-shirt, which also doesn’t seem like the culmination of sicalipsis.

For that of complying with all standards, our redeeming trio will cross the track to board from a tiny stage Hesitate, the three swirling around a beautiful acoustic ballad, archetypal but drinkable. In those things you end up noticing, it is true, the baggage and returns to the odometer. But the best of the night will come with Jealous, Nick’s solo top and a piece that shares that soul and sensual spirit with which Bruno Mars has ended up becoming a Michael Jackson of circumstances.

Confetti rain, flares, pyrotechnics will still arrive. We will endorse two consecutive ballads of grand piano, with such molasses as to ruin the most suffered of the diets. And at least, to tell you everything, we will discover that I Believe It is impeccable, silky, elegant, catchy. We will end up with Sucker, the new hit, and everyone will take this hour and a half of tuning for some goodies that not only gave the stretch, but that they grow before their own. As much as the shot ritual and the toast “for the best fans in the world” will sound as convincing as the sailor who repeats the same compliment to the bride of each port.