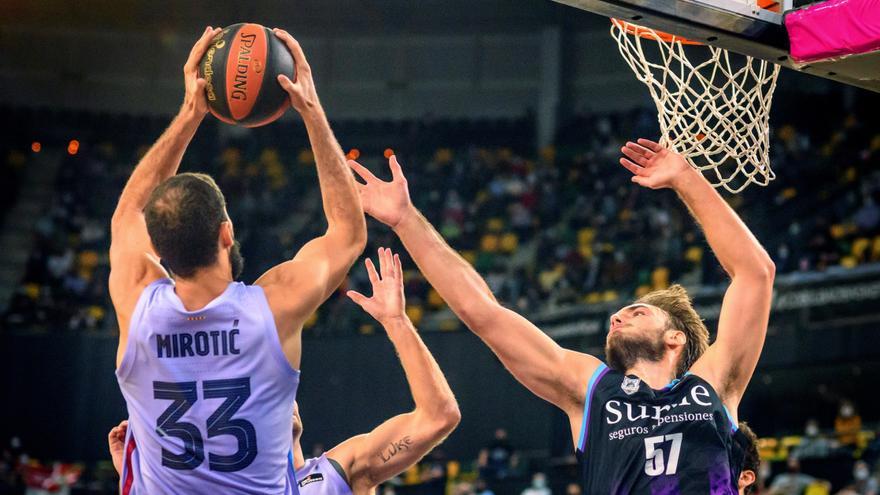 The great game of the 20-year-old Lithuanian guard Rokas Jokubaitis and the usual excellent performance in not too many minutes in play of Nikola Mirotic led the clear victory of the FC Barcelona in Miribilla, where the Catalan team beat Surne Bilbao Basket by 68-74.

A clear victory for a sweet Barça in un start of the course in which he adds his four league games by victories and defeat too hard for a Surne Bilbao who, although he had his fourth game lost in the four played, improved compared to the previous match at the Bilbao Arena against Casademont Zaragoza.

At Bilbao Basket, who lasted in the game until the break, the highlight was the start of the Brazilian Rafa Luz (7 and 10) and the Dominican Ángel Delgado (15, 4 and 17) and the scoring moments of Andrew Goudelock (14 and 18) and Ludde Hakanson (9 and 10).

The fight between the young Gytis Masiulis and Alex Galán also left a good flavor in the stands. Masiulis (5 and 5) had his father, Tomas, on the rival bench as an assistant to Sarunas Jasikevicius; and Galán (5 points), who had to replace the second ‘5’ of those in black, the American Jeff Withey, injured.

A triple by Calathes (0-3) and five points in a row by Luz (3-5) opened a game with an initial prominence of Mirotic, who scored the next ten points for his team, and Delgado, much improved from his previous match in Miribilla against Casademont Zaragoza.

That duel made a very close first quarter, also with a good role for Luz, who finished 16-18.

Barça extended to four the advantage at the beginning of the second quarter launched by Jokubaitis, but Bilbao Basket responded with a 7-0 lead by Bigote and Masiulis that gave the Mumbrú team the greatest advantage, three points (25-22).

Kuric stopped the bleeding (25-26), the locals went ahead again thanks to a technique to Jasikevicius (28-26) and Jokubaitis He reappeared to put the Catalans ahead until a break that was reached 33-41 after a basket by Hayes almost on the horn.

Two back-to-back baskets from Mirotic and Calathes’s changing rooms confirmed Barcelona’s breakaway (33-45) that already ended the match in a third quarter that ended 45-64, despite the fight between Delgado, Hakanson and the young Galán.

Jokubaitis was being unstoppable for the Bilbaoans and the Lithuanian He was the most responsible for the 47-69, the maximum difference that occurred on the scoreboard, from the beginning of the last quarter.

Surne Bilbao reacted by the hand of the ‘Minibamba’ Goudelock until they were only eleven points away two minutes from the end (65-76), but Barcelona again widened a distance that stayed at 16 in the final result (68-84) after a last triple by Rigo.

Incidents: match corresponding to the fourth day of the Endesa League played at the Bilbao Arena in Miribilla before 3,957 spectators, the practically 4,000 who could attend the clash due to sanitary restrictions. Between the first and second quarters, Bilbao Basket paid tribute to its former Belgian international player Axel Hervelle, who witnessed the match.