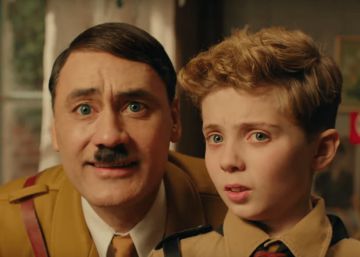 During World War II, a child of the Hitler Youth named Jojo discovers that his mother is hiding a Jewish girl at home. If the premise sounds like drama, in the hands of Taika Waititi nothing is further from reality with Jojo Rabbit Because that child convinced of his Nazi ideology has as an imaginary friend Adolf Hitler himself, and it is a mess with legs. Waititi, one of the last geniuses of current cinema, director of What we do in the shadows, Hunting for the ñunamos or Thor: Ragnarok, He has adapted the novel by Christine Leunens (in fact, he wrote the script a while ago, in 2011), and has counted as secondary with Scarlett Johansson as a mother, and Sam Rockwell, Rebel Wilson and Stephen Merchant. And like Adolf Hitler, Waititi himself, a descendant of a Maori father and a Jewish mother, who in an interview said he couldn't think of a better "fuck you" for Hitler than making this movie. Jojo Rabbit opens in Spain on January 24, 2020 and here we show its trailer first.