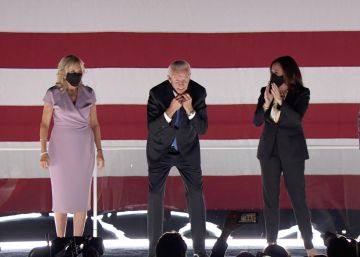 Light versus darkness ”and“ law and order ”. They are the two visions of America that the presidential candidates represent. The first corresponds to Democrat Joe Biden. The second, to President Donald Trump. As Barack and Michelle Obama recalled in their speeches at the televised Democratic convention, “when the people elect a new president it is because they want someone radically different from who they were.”

It is not as obvious or simple as it seems. At least, in the most powerful nation on earth and the world’s leading economy. Bush’s worldview could not be more different from Obama’s and vice versa. The contrast between Biden and Trump cannot be greater either.

This is one of the reasons why, in his speech accepting the presidential candidacy, Biden insisted on the contrast between “the light” represented by the Democrats and the darkness that, according to Biden, is Trump. The contrast has biblical reminiscences and the eternal struggle between good and evil. If he wins, Biden would be the second Catholic president of the US He made a reference to “all Americans are children of God.”

It is neither obvious nor straightforward, because Biden centers his candidacy on that stark contrast to Trump. According to that evangelical allusion by Biden, “if you elect me president, I will not be a Democrat, but an American,” in clear appeal to bipartisanship and inclusion. Biden projects the idea that Trump rules for only a privileged few. Instead, Biden promises to work for the majority, “the 99%,” in contrast to the 1% of millionaires.

Biden has two good reasons for appealing to national unity. One is partisan and the other is patriotic. First, Biden needs to unite the party, which is no longer the political center of Clinton and Obama. There is one more wing to the left represented by Senators Elisabeth Warren and Bernie Sanders who has to truly be integrated into the platform of Biden, who in 1972 ran for the Senate and 33 years ago made her first bid to become president. Now 77, he appeals to the seniors and it’s hard to imagine a second term with an 80-year-old president. Neither America is Egypt nor Biden is Mubarak. The youngest base in the Democratic Party would have preferred Alexandria Ocasio-Cortez as a vice presidential candidate, because she is more on the left. But, with little political experience, Biden opted for Kamala Harris, who as attorney general for 24 years, counterbalances Trump’s “offer” of “law and order.”

Harris brings experience, political judgment, knowledge of the legal system and, along with her professional virtues, is attractive to the female, African American and Indian, young, Californian and center-left vote.

Biden needs to unite the party around one goal: defeat Trump. He knows that, without a common enemy, political families could be tempted to each go their own way or even not vote. The patriotic sense of the Democratic candidacy is related to the difficult situation in the country, which Biden attributes to Trump: there are so many open wounds that America needs a candidacy that heals, that heals. That requires restoring old US alliances around the world and rejecting “dangerous friendships” with dictators (the new book by famous Washington Post journalist Bob Woodward, entitled Rage, due out on September 4, reveals private correspondence and friendly of more than 30 letters between Donald Trump and Kim Jong-un, dictator of North Korea).

It also requires working for the working class so they can access the middle class and keep the health insurance that Obama provided. Biden recalls that, due to Trump’s management of the pandemic, “more than 170,000 Americans have died,” 50 million workers have lost their jobs and the health of 20 million people is at stake.

Biden’s message is less specific than a vision of inclusive America, with more social and racial justice. Biden cites the African American killed by the police, George Floyd, who sparked protests throughout the country “as they have not seen since the sixties,” remarked the Democratic candidate.

Biden’s vision contrasts with the image that Trump projects of himself as a manager who knows how to do things, get results. Biden transmits empathy: with the young man who stutters and appears at the televised convention and with the relatives of those killed by Covid-19. He, too, stuttered as a child. And he knows what it’s like to lose loved ones: a car accident robbed his first wife and daughter. He was widowed with two children. One died in 2015 of brain cancer.

In his speech to the convention, Barack Obama stressed that Biden’s resilience, forged in overcoming pain, is the reason he elected him to the vice presidency.
Several Democratic rivals and a few Republicans supported Biden during the convention. Was necessary. The country is on fire, with the pandemic, the economic recession and the social and racial confrontations. Biden appealed to Roosevelt, who from a wheelchair (polio): won the Great Depression and World War II. Unity message.

Today, Monday 24, begins the Republican convention, which revolves around Trump and needs help because Biden beats him in the polls. In the republican convention we will see another country, another nation, a parallel reality that coexists with the previous one.

Jorge Diaz-Cardiel Managing Partner of Advice Strategic Consultants and author of ‘Trump, Year One’, ‘Hillary vs. Trump ‘and’ Trump, year of thunder and complacency ‘

no other man made us so happy