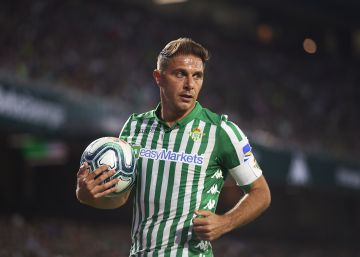 Aurelio Sánchez did not hesitate to repeat it at the dawn of the race of Joaquin Sanchez "Joaquín will play until he is 40 years old," said the father of the captain of Betis, owner of the bar in El Puerto de Santa María, El Chino, in whose surroundings Joaquín gave his first kicks to a ball. The boy wanted to be a bullfighter, but ended up being a footballer. Many years later and laughing, when he returned to Betis, Aurelio went further: "The longevity and good physique of Joaquin are because his mother gave him the tit until he was more than six years." The reality is that the captain and emblem of Betis remains the protagonist in the Andalusian club at 38 years old. In this race against time, the winger continues to beat records in his 21st consecutive season in the elite. For example, the official website of the Verdiblanca entity said that after scoring a penalty goal against Mallorca on the last day he reached 100 points in his professional career, which began in the 2000-01 season with Betis in Second . Joaquin has scored 53 goals with Betis; 30 with Valencia; 10 with Málaga and seven with Fiorentina. According to the statistician Fran Martínez, Joaquín played his 769 club game in Mallorca.

“I don't remember a serious injury. It really has spectacular genetics and an incredible recovery capacity after the matches, ”says Tomás Calero, head of Betis medical services for 26 years, until 2018. Joaquín has played in the Andalusian club in two stages. From 2000 to 2006 and now in a row since 2015. With this return, the portense was brought to the level of the other two great myths in the history of Betis: Luis del Sol, who returned in 1972 after playing a decade in Madrid , Juventus and Rome; and Rafael Gordillo, who in 1992 returned to Betis after seven seasons in Madrid.

Joaquín has returned to play in Europe with Betis and is surprising Rubi's coaching staff for his involvement and performance. In fact, he has played at least 25 games in each season since 2015. In the current one, he has already been 14 and has scored three goals. “I can firmly say that Joaquin will play without problems until he is 40 years old at the highest level. He is performing very well and the data prove it, ”says Marcos Álvarez, physical trainer at Betis. “All the records of speed, endurance and other parameters of Joaquín in the matches are like those of Fekir (26 years). With that everything is said, ”Álvarez emphasizes.

Joaquín is 38 years old and has a contract until June of next year. Betis and the player have already agreed on the conditions for an upcoming renewal for at least one more year. In this way, Joaquín would continue playing in the elite until almost 40 years old, age that will turn in July 2021. The player was very well with the stage of Quique Setién on the bético bench. His way of playing relieved him of many efforts. Now, with another system, Joaquín has again surprised by his ability to sacrifice and adapt to what Rubi asks. The footballer, in addition, is the leader of the wardrobe and from that position he has contributed to bring positions between the squad, where some of its members longed for Setién, and the coach. Like the meeting that took place in the previous week to the duel against Celta on October 30. There was born a Betis that has obtained 10 of the last 15 points.

Joaquín, whose renewal can be announced in the coming weeks, was awarded by LaLiga and the newspaper Ace for being the active player with the most matches in the Spanish competition (532). It is the fifth of all time behind Buyo (542), Eusebio Sacristán (543), Raúl (550) and Zubizarreta (622). The Bético has 216 wins in LaLiga, being the player with the most wins in the history of the competition without ever having played in Barcelona, ​​Madrid or Atlético. "It is that Messi does not have my physique," Joaquin said jokingly when asked at the 13th Edition of the Awards ACE for the words about a future withdrawal of the Argentine in his speech after obtaining his sixth Golden Ball. More than 19 years after his debut in the first team of Betis, Joaquin wants more. At least until age 40, as his father predicted. “I love football above all things. It is a privilege to enjoy this sport and I would like to continue doing it, ”added the footballer, who enjoys a Betis that in two weeks has announced the renewal of Canales and Andrés Guardado.