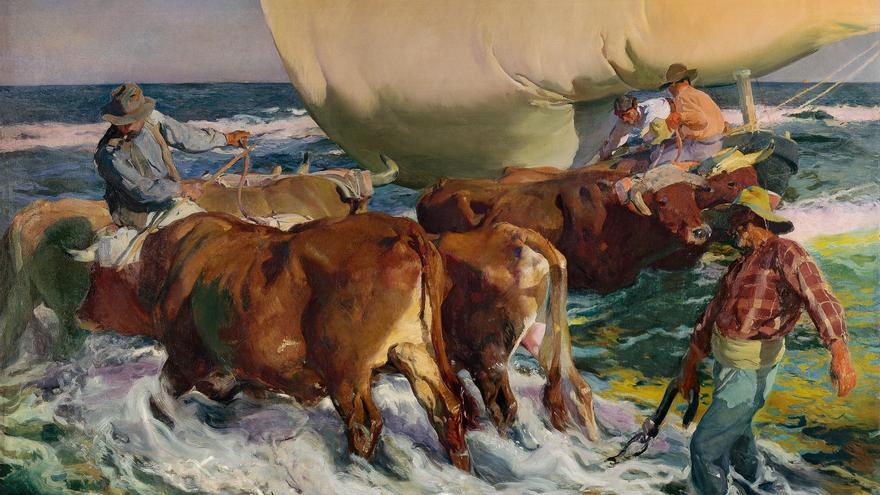 Miami, Jun 25 (EFE) .- Three memorable works by the painter Joaquín Sorolla (1863-1923), considered the Spanish master of light and the color of the sea, will be exhibited starting this Friday at the Norton Museum of Art, in West Palm Beach (South Florida), the first show in the “Special Guests” series.

For this exhibition, which will be open to the public until June 2023, the Hispanic Society of America, based in New York, has lent what is undoubtedly one of the masterpieces of the Valencian painter, “Oxen taking out the boat” (1903 ).

This 298 x 440 cm oil on canvas that currently decorates the Hispanic Society museum synthesizes the mixture of visual beauty with the physical sensation of the sea (the swirls of water) and the bodies that are always associated with the name of the Spanish painter.

The show honoring Sorolla and his pictorial Mediterranean atmosphere is the first in an ambitious series of exhibits launched by the Norton Museum of Art, Florida’s largest art museum.

“Personally, I am an enthusiast of Sorolla’s paintings and I am happy that Norton had the opportunity to collaborate with the Museum and Library of the Hispanic Society” and to be able to share “this important work with the visitors” of our museum, he said today. to Efe Ghislain d’Humières, director and general manager of this museum.

D’Humières described as “monumental” the 1903 painting “Beaching the Boat” (Afternoon Light), or “Oxen taking out the boat”, loaned to his museum by the Hispanic Society of America for two years, a painting that, he added, “It is now presented in dialogue” with two works by Sorolla belonging to the Norton collection, “Child on a Beach” (“Child on a beach”) and “Portrait of Enrique Recio y Gil” (“Portrait of Enrique Recio y Gil” ).

The objective of this special program that opens with Sorolla is “to attract our visitors with something spectacular and little seen, to highlight important works from public and private collections,” said Robert Evren, consulting curator of the Norton Museum. of Art for European art.

For Evren, the appreciation of a work in the history of painting is something in constant flux, since “cycles of taste elevate certain artists and degrade others.”

And, in this case, “we are seeing a reassessment of the reputation of an artist like Sorolla.”

“You could say that the time has come to regain its international reputation,” said Evren.

In this context of international revaluation of the Valencian painter, the curator of the Norton museum assured that “Beaching the Boat” is one of the “most dynamic, ambitious and grandiose compositions of a time in which Sorolla’s realism and his impressionism seem to be in perfect balance. ”

The exhibition note adds that Sorolla’s paintings “are influenced by scenes of daily life on the seashore”, as in “Oxen taking out the boat”, a “masterpiece” of astonishing effect that meticulously evokes reality and captures the “fleeting effects of light, shadow, and color.”

In the years that followed the founding of the Hispanic Society in 1904, Sorolla enjoyed a very special relationship with the institution, which sponsored two US exhibitions of his works, in 1909 and 1911.

Its founder, Archer Huntington, acquired a multitude of works by the Valencian master that, today, constitute a considerable part of the museum’s 20th-century art collection, the largest with a Hispanic imprint outside of Spain.

The Hispanic Society currently has the largest and most prestigious collection of Sorolla’s works outside of Spain (88 oils on canvas, 20 sketches and 110 drawings), making it a must for all those who admire and wish to study the «painter of the light”.

The collection of the Norton Museum of Art, founded in 1941, includes more than 7,000 works, with a special presence of European, American and Chinese art, as well as contemporary art and photography. In 2003 it surpassed the John and Mable Ringling Museum of Art in Sarasota (Florida’s west coast), and became the largest museum in the state.