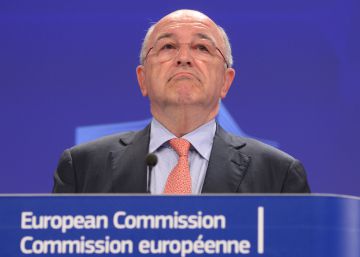 The former vice president of the European Commission, Joaquín Almunia, took advantage of the tenth birthday of the rescue fund, the FROB, to launch a message of draft. By way of self-criticism, at the conclusion of a round table where he participated, he stated: "In 2012 and 2013, a financial institution escaped us, Banco Popular ran awayMaybe it would not have happened with a single European supervisor. I remember some analysis then to see if he had to go through restructuring and he did not do it because he could present a balance in a way that seemed better than it was, "he assured.

Almunia, who was responsible for negotiating the rescue of some of the biggest European banks in the past crisis, did not elaborate on this statement, which leaves in the air a manipulation of the balance sheets as well as the erroneous inspection of the Bank of Spain. The statement caused a murmur in the auditorium of the Ministry of Economy, crowded by senior managers of all Spanish banks and top representatives of European financial institutions. Almunia is thus placed close to the speech that Luis Linde himself, former governor of the Bank of Spain, who suggested, but not so sharply, in the Congress of Deputies a couple of years ago.

At the same table in Almunia was Margarita Delgado, now subgovernor and in the years of crisis, member of the Banco Popular inspector team. There was also Íñigo Fernández de Mesa, now a director of Banca Rodhschild and former Secretary of State for the Economy, who also piloted the rescue of Spanish banks in crisis. None commented on Almunia's statements. In the first row of the act, Fernando Restoy was also sitting, who occupied the position of deputy governor during the 2012 and 2013 crises.

Before Almunia participated the vice president of the European Central Bank (ECB), Luis de Guindos, who said that the resolution of Banco Popular and its subsequent sale to Santander for the symbolic price of one euro allowed to preserve the interests of depositors and financial stability After his speech, Guinos left the room.

In his turn of participation, prior to Almunia's comment, Delgado insisted on a message that has been set as a goal: that banks raise capital. The subgovernor commented that the solvency of the sector was 8% in Tier 1 ratio and is now 13.5% on average, "but supervisors do not lower the bar and ask to increase solvency by being discreet with dividends and strengthening capital."

Delgado also called on banks to make practical investments in technology, "not from the outside, but inside, with systems that are really useful to improve the business." In addition, he pointed out that society is undergoing major changes and that banks had not adopted these changes and that they should collaborate more with society.

José Manuel Campa, recently appointed president of the European Banking Authority (EBA), said at a subsequent table that "we are not prepared for the next crisis" because the regulation is not yet ready to face challenges that they could arrive by shadow banking or technological problems. He even suggested that, as much as possible, if the crisis came, it would be necessary to ask citizens for money again. Even so, he stressed that banking is now more solvent but less profitable.

Delgado agreed with this problem and, in his speech, insisted on the lack of profitability of the sector and recalled that the boxes have gone from 50 to 9, with a "brutal reduction of business that is estimated at 600,000 million in Spain alone without having the international balances, which represents a 40% fall in the volume of assets ".

He also recalled that the banks have made "an unprecedented sanitation effort, some 300,000 million charged against their reserves, and the number of most active defaulted adjudicated reached 95,000 million."

Deposit insurance for all of Europe

For his part, the governor of Bank of Spain, Pablo Hernández de Cos, in the same conference, he has advocated completing the Banking Union and launching a European deposit guarantee insurance, "fully mutualised and with a final date of arrival".

"We have to assure depositors and European citizens that their bank deposits up to 100,000 euros are equal insurance, regardless of the entity in which they are deposited and the country in which they live, within the Banking Union," said the governor.

In this regard, he added that if banking supervision and resolution are carried out in a centralized manner, the responsibility for bank deposits must also be centralized.

Despite the restructuring and reorganization of Spanish and European banks, the governor believes that the sector still has pending challenges, such as ensuring that the support of the European Single Banking Resolution Fund is sufficient to face the potential challenges it may face. to face.

Another challenge for the sector will be to address the issue of the provision of liquidity in the resolution of an entity. "It is necessary to ensure that there are sufficient mechanisms for providing liquidity to the resolved entity that makes the tool and the resolution process itself credible," added the governor, for whom the solution could involve the European Central Bank (ECB) as a provider Of funds.

For the governor another of the challenges of the sector is to harmonize the insolvency regimes in Europe. "If we supervise and resolve banks in Europe in a common way, I think we should also be able to liquidate them in a harmonized manner," added Hernández de Cos.

"It would be a question of having a separate insolvency regime for banks, given their idiosyncratic characteristics and the negative externalities that their slow and inefficient liquidation can generate on other banks, on deposit guarantee funds and on the real economy. of insolvency should be homogeneous in all European countries, "he said.

Finally, the governor has underlined the importance that has in the European banking resolution scheme, anti-crisis mattresses (known in slang as MREL) sufficient for entities, and has warned that for some banks this requirement is "a considerable challenge " in the next years.

This challenge, he added, "should lead them to adequate planning and retention of their own resources and the issuance of computable debt such as MREL, as well as to take advantage of the windows of opportunity presented to meet the requirements within the required timeframe."