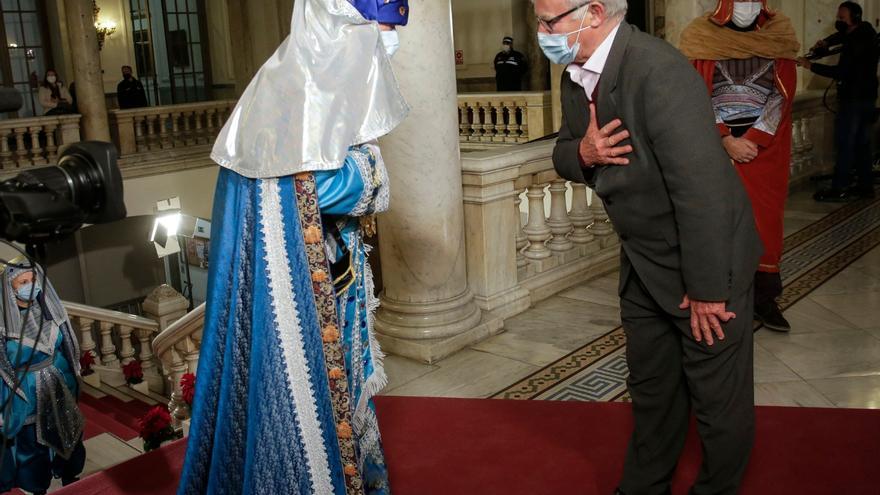 The mayor of València, Joan Ribó, has indicated this Thursday regarding the arrival last Tuesday of the Three Kings to the City Hall in open-top buses and the public who gathered to see them that “it has been a mistake” to raise this act as it was done, while affirming that this is an issue that should be “improved”.

Along these lines, he has considered that “the protocols were not reviewed properly”, he has said that there was a mistake and pointed out that “it could have been done differently.” Likewise, in reference to fallas activities, he has ruled out, based on this and given the evolution of the Covid-19 pandemic, organizing other events.

“In the conditions we are in, we can neither speak nor raise them,” said the mayor, who assured that his team “always” intends to “learn” from what is happening “and improve it.”

Ribó has spoken in this way in statements to the media after presiding over the meeting of the Municipal Operational Coordination Center (Cecopal), asked about the arrival of the Magi to the consistory last Tuesday and about the criticisms made of this act after have gathered public to witness it.

The municipal official has stressed that it was not a parade of the Three Kings and explained that it was the arrival of the Magi from the East to the City Hall before the official reception that was offered to them inside with the presence of representatives of the local corporation.

However, the mayor has commented that the “problem” that occurred is that the people who were in the Plaza del Ayuntamiento when the Magi from the East arrived, concentrated to see them next to the fences that had been installed. “In this square every day there are a lot of people and at the time it was fenced there was a concentration of people, as you have all seen in the videos,” he said.

Ribó added that although he does not have “the facts,” he has “data”, because of “many people, including those responsible”, who have “told him that there were no more people on the 5th – with the arrival of the Three Wise Men. – that there was on the 4th or 3rd of January in the Plaza del Ayuntamiento. “There are many activities here – for Christmas -” and “it is also a walking area for many people,” he added, while reiterating that with the arrival of their Majesties “there was concentration around the fences” .

“There we were wrong”

“That is something that we analyze, putting up the fences and the buses coming to the square,” added the mayor, after which he has opined that, however, the protocols were not reviewed properly. “I think we do not review the protocols properly and we are wrong there. I think we have to say it sincerely,” he said.

Likewise, Joan Ribó has wondered if the arrival of the Magi to the consistory “could have been done differently” and the answer was “yes” and pointed out that “perhaps, putting the buses in the back of the Town Hall the problem would be over. ”

“I think we have to improve but I think it is neither more important nor more significant than what has been seen in many areas of the city that I do not want to detail” during Christmas, he added. “There are many others where we could see similar concentrations,” he said.

Asked if what happened with the arrival of the Magi from the East could be a wake-up call for upcoming events in the city such as those that may be raised by the Fallas, Ribó has answered: “We always intend to learn from what happens. and improve it. I think the issue is very clear. ”

“If I have said that there have been failures, we have to correct them. You tell me about future events that at the moment, of course, in the conditions we are in, we cannot speak or raise it. Until the curve does not stop growing and it starts to go down and until we are vaccinated, months will pass. How many, I have no idea, “he added.

“We comply with the rules”

On the other hand, when asked about the statements of the President of the Generalitat, Ximo Puig, about the arrival of the Magi from the East to Valencia, the mayor insisted that “there was no parade.” “It is clear that the parade should not have been done because it was not done. Puig is absolutely right,” he asserted, while also affirming that the rules are met in this city.

“We comply with the rules. The problem is that at a certain moment people were concentrated in a certain space” of the square, he said, in addition to repeating that there has been “an error” that must be “improved.”

Likewise, asked if the vice mayor and socialist spokesperson in the consistory, Sandra Gómez, told him that she did not share the idea that the Kings arrive by bus, Ribó has said that he did not and has explained that he has not discussed the matter with the mayor of Festive Culture, Carlos Galiana. “I can neither affirm nor deny,” he pointed out.

Ribó has valued, on the other hand, the words of Gómez in favor of working together and has ruled out that what happened on the 5th affects the local government Compromís-PSPV, as he has said, “built on a strong foundation.” “The storms in a glass of water do not affect him,” he stressed.

On the complaint announced by the PP, the mayor has indicated that it will be “one more” and that he has “every right to do so.” Regarding criticism from the hoteliers, he commented that he understands that those who have seen “their business reduced in a few hours are more upset at this time.