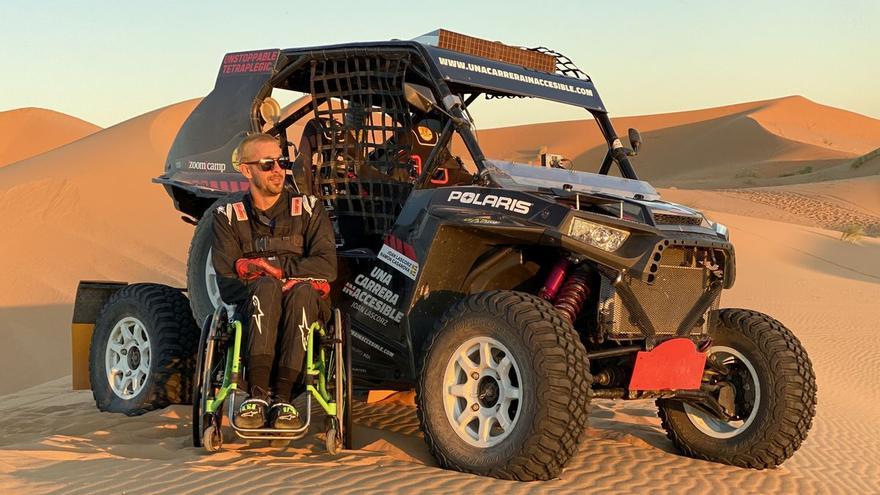 Joan decided to ignore the worst omens dictated by doctors. “From the sofa to a chair and always with help.” Heard the phrase after overcoming weeks of ICU and hospital, and months of rehabilitation at the Guttmann Institute in Barcelona. Joan Lascorz (36 years now) his body was paralyzed from chest to feet and only moved his arms with difficulty and without feeling in his fingers. And much less with the force necessary to grasp the steering wheel of a car that races at full speed on the sand of the Dakar Rally. And we will have it there in just a month.

He did not make it easy for the doctor at the Spanish Automobile Federation that in 2014 he had to decide whether to grant him a sports license to drive. I wanted to go to the rally Lower Aragon But for the federative it was a complete responsibility to give permission to a person with tretraplegia. “You have to drop to the ground, get out of the car by yourself and do it in less than a minute.” Something simple for many people but not for Joan due to his tremendous disability due to a motorcycle accident. “Ran Superbike and in 2012 I crashed into a concrete wall of the Imola circuit at 220 kilometers per hour “; a sentence to the wheelchair.” And on top of that it had to be electric because I don’t have the strength in my arms to move the wheels “.

Right away you see Joan Lascorz with the federative doctor in the circuit of Montmeló, some mats on the ground and especially him getting out of the car in less than a minute and throwing himself to the ground. “Something that he had to show he could do for safety reasons in the event of an accident.” So with the license in his pocket he went to the Monegros to finish among the best.

And among the best in the Buggys category wants to be in the Dakar Rally which begins on January 2. Your team will accompany you, with Ramon Casanova at the helm, as director of the Buggy Masters Team, and with Miguel Puertas As a co-pilot, a former Air Force lieutenant colonel who flew with the Águila acrobatic patrol and who piloted fighters before becoming one of the Dakar veterans.

Joan Lascorz He will become the first quadriplegic driver to compete in the wildest and most complicated rally in the world, which in January 2022 will repeat the stage in Saudi Arabia. “I have not been able to test the car because it is already on a boat. This is another of the added problems because the vehicle had to adapt to my disability and I will only be able to drive it shortly before starting the competition.”

But yes Joan He fixed his farmhouse in Maçanet de la Selva and left it unobstructed for his wheelchair, what is the difficulty of the Dakar? “Before my accident I had a farm land in my farmhouse. I got an excavator whose controls I enabled to drive it and I built a circuit to train with the buggy.”

With Lascorz they travel to Saudi Arabia, apart from their team manager and co-driver, an assistant “who takes care of me, helps me dress, clean me, watches my diet”, three mechanics, a physio, and also a camera that will record the second part of the documentary ‘Una carrera inaccesible’ whose first installment will be broadcast at the end of the month on the #Vamos de Movistar + channel.

The protagonist of the challenge in the Dakar. Joan Lascorz

But all this operation costs money, despite the fact that they have already advanced all the capital for the registration, tickets and salary of the team’s assistants. For this reason, on December 9, the crowfunding operation to raise funds through the Verkami platform. Explain it Ramon Casanova: “Each entry will generate a reward, which can be anything from a shirt to following the rally from Arabia, depending on the contribution made.” There will also be the possibility of inscribing the name of the benefactor in the buggy or having priority access to the videoblog that Joan will perform after each stage.

“A buggy is easier to drive because it is an automatic car. With my right hand I accelerate or brake and with my left I move the steering wheel without force thanks to a lever. My objective? It is also my doubt. How far will I be able to go? “I would like to finish. But I would like to go fast and be among the best at the same time.” It sure does.