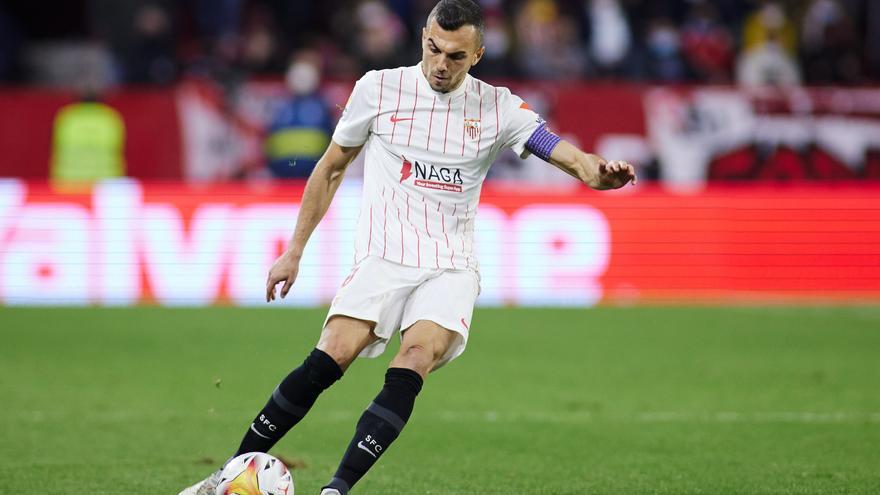 midfielder Joan Jordan highlighted this Friday, at the event organized by the Seville for the renewal of his contract until 2027, which "The trust placed in him is one more responsibility" that he has in his professional career at the Seville club.

The Catalan footballer received this tribute in the anteroom of the Ramón Sánchez-Pizjuán stadium, when he fulfills his third season as a sevillista, bunder the motto of 'Joan Jordán, one of ours' and with the presence of the president of the club, José Castro; and the sports director, Ramón Rodríguez 'Monchi', among others.

Jordán recognized that "it is a very special day, one of the most special" of his sports career and that his "illusion and dreams is to continue here, this season and five more", said the footballer, who promised "to continue working to improve and be with Sevilla as high up as possible".

"I'm excited because it's what I wanted. People can't believe how I feel about this renewal because they all know how much I've suffered to be here.", affirmed a visibly emotional Jordán surrounded by his family in the act.

The midfielder assured that he is where "they want" him and underlined the affection that the Sevilla fans show him, which "is incredible".

"I knew where it was coming from, but once here you soak up everything. It's a european club very important, but also the values ​​of the club are above everything, which is what makes it go where it's going," he said.

Jordán, about the progress of the team in the current season, said that in The league they are in "good positions -seconds-" and that the Europa League, in which they are classified for the round of 16, they are "very excited" because it is a competition that the team has won six times in its history, the last with him Also as a player.

"We have three and a half or four incredible months ahead and the illusion is total", Jordan stated.

The president of the club intervened in the act to specify that "andhe Seville does not renew Joan Jordán, Joan Jordán has been renewed for his performance. He is a club player who has done a lot here and can do much more."

Monchi, for his part, wanted the midfielder to lift "some more title" with this team, although he specified thatand "it will be difficult for you to take a higher title than being considered one of ours".

"There is no greater title. Being one of ours is not bought by kissing the shield or with populist tweets, it is earned with an attitude and a way of being. You have earned it, representing the values ​​of the biggest club in the world. You could have used a less cautious language, not long ago, you have opted for silence. Your prudence and your silence make you a better person and a better professional," said the Sevilla sports director.

The 27-year-old midfielder He has played 129 games to date since his arrival in the summer of 2019, 91 games in the League, thirteen in the Champions League, ten in the Europa League and fourteen in the Copa del Rey, in addition to his participation in the European Super Cup, in which he has scored five goals and distributed eleven assists.

Born in the Girona town of Regencós, the midfielderor arrived at Seville from Eibar, who signed him from Espanyol, his training club.

Threats after the Andalusian derby

Jordán revealed that after what happened in the Cup derby in the field of Betis, that had to be suspended on January 15 when the footballer was hit in the head by a PVC stick thrown from the stands, his family "has received threats".

"On a personal level, me and my family have had a pretty bad time. My family has received threats, something that should not happen", said the Catalan media in the anteroom of the Ramón Sánchez-Pizjuán stadium to questions from journalists about everything that happened as a result of that incident.

"As you well know, I have been silent, I did not want to pronounce myself. I'm going to say one thing and settle the matter for myself. I was the attacked and, from there, the rest is others. It's a shame that these things happen in the fields," said Joan Jordán.

The midfielder added that, "Removing that, each one has given their opinion and commented on what they wanted to comment on. Each one has the class they want to have", and reiterated that he was leaving the "issue settled" because he was renewing his contract with his family and children.