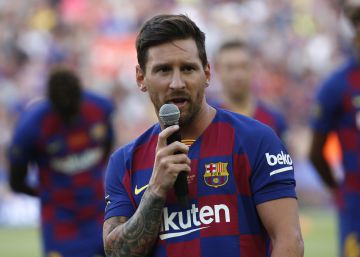 The football calendar is so crazy that sometimes, even if it is by chance, you can play in favor of the interests of the fans (and not just the spectators), as it happened in its 54th edition with the Gamper, one of the reference summer tournaments, the main festival of Barça. The date, the schedule and the poster invited to go to the stadium no matter how dissuasive the public address of the Camp Nou was.

There has come a time when the loudspeaker of the clubs is so deafening that the notion of reality and the sense of demand is lost, and more so in an entity like the Barça, who has long lived for and for the Champions League. The gent blaugrana He is eager to know if the team has been corrected from Liverpool, reason to understand the point of fever that this time reached the Gamper (98,812 spectators).

Barcelona's self-esteem has been increased by the signing of De Jong, more acclaimed than Griezmann, from which many goals and assists are expected to be admitted to Messi's table; some satisfaction is noted for the quarry's rebound due to the contribution of young people like Riqui Puig, Aleñá and Carles Pérez; and blindly trusts Messi, idolized by a hobby who wonders every day if it will be true that he can return Neymar.

Arrived on Saturday in Ibiza, sanctioned three months by Conmebol, Messi prepares to lead one more season to Barcelona after being crowned as "little devil" in the 2005 Gamper by Capello. Messi's tone raised Camp Nou with a concrete, vindictive and ambitious speech, which is demanded of the best player in the world and captain of Barcelona.

“It's hard to say something today after last season, which ended up being a bit bitter because of how it happened. But I do not regret anything. I repeat the same thing I said, ”he affirmed without mentioning the Champions League as then, when he described the European Cup as“ beautiful and desired ”. “I trust this team, these players, this coaching staff. I have no doubt that together we are going to fight again for everything ”

The 10 He firmly claimed the League title, the eighth in 11 seasons, “something that would be great for any club, for this one too, although today we may not give it the value it deserves. But in a few years we will realize how difficult it is. ” And then he reaffirmed: “In this club you fight for everything and this year will not be different. We are with renewed illusions, very much looking forward; I hope you arrive in the same way. ”

Messi's determination lifted his spirits after a moment of trouble triggered by the warm speech of Valverde. Away from populism, his message did not ignite the crowd: “We want to always win to give you our victories. Last year we could not or did not know. We start again and we will fight for the four competitions. ” There was applause and some pitos to the intervention of the trainer, which awaits a very demanding season, as well as Dembélé and Luis Suárez while it is not yet known if a Coutinho buyer will come out, offered to the PSG in exchange for Neymar.

"Today, at this time, it is ruled out," Vice President Jordi Cardoner responded in reference to Neymar. Nobody gives his incorporation as impossible or not to oppose his friend Messi, who would love him back. The figure of 10 grew even though he did not even dress against Arsenal, struck down by the other partner of Argentina: Luis Suarez. The word of Rosario resonated more than that of any signing; send the old guard to the impatience of Griezmann. Football in any case will not start until Messi plays.