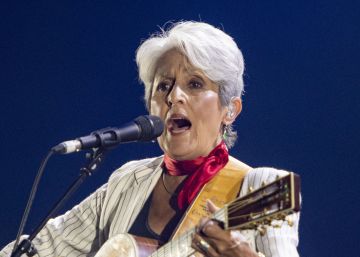 “This is my last concert of my last tour,” he announced. Joan Baez at half an hour of recital, in case there was any clueless among the 1,750 attendees who had exhausted the role in the Madrid Royal Theater. He said it without a hint of drama and so naturally that he took advantage of that moment to get rid of sandals and step on the last of his more than 5,000 scenarios with bare feet. Assuming the end is not the sweetest of the dishes, but wisdom helps to internalize the cycles of life. And this time we assumed the immense honor of sitting in front of an immensely wise woman.

If nothing or no one remedies it, Baez climbed this Sunday for the last time to some tables. The Real is not a bad place to say goodbye, of course: beautiful, distinguished, with ringorrango and immaculate acoustics. Joan remains as cute and stylish as usual, snowy hair matching the jacket, splendid at her 78 springs, crystalline in her doorbell and unwavering in the commitment to just causes, which often also coincide with the lost ones. There are no shortcomings or limitations that force this withdrawal, beyond the legitimate yearning for calm and introspection to face the last leg of the road. But the illustrious Joan Chandos moves aside without anyone being able to formulate a single reproach of substance or its integrity or its file. The decision of goodbye is taken and, paraphrasing the song that served as opening, it does not have to think twice. That's OK.

‘Don’t think twice, it’s alright’ was only the first foray into Dylan’s repertoire, whose protagonist was a couple and muse. They would follow each other later 'It ain't me babe' (in a particularly beautiful reading, thanks to Dirk Powell's subtle arabesque with the electric guitar), and 'Forever young', although the payroll could also somehow be added ' Diamonds & rust '. A catalog of fascinations, reproaches and scars about the relationship with the bard and the magnificent opportunity to delight in the intersection between the voices of Joan and Grace Stumberg, one of his countless young heiresses.

It is curious that these ‘Diamonds’ were the only contribution of Baez throughout the night as author, another detail that endorses his generosity and humble mood after 59 years of record. The New Yorker wanted to dedicate her last 87 minutes of trade to some of the men who have defined not only her musical work, but her gaze towards this exciting and turbulent world that has touched us in luck, and that includes Leonard Cohen ('Suzanne' ), Donovan ('Catch the wind'), Kris Kristofferson ('Be and Bobby McGee'), Lennon ('Imagine') or Paul Simon ('The boxer'), but also to less popular luminaries like Earl Robinson, whose ' Joé Hill 'made a fortune among the Abraham Lincoln Brigade for anti-Franco resistance.

An absolute weakness for our lady, for the record. “I sang it in Woodstock; I have sung it in any part of the world, with left or right governments, and I continue humming it in the shower, ”he said. And another example that Joan's songbook would never consent to a meaningless meaningless. It had already happened minutes before with ‘Sports’, by Woody Guthrie, as current as a parapet against those who with so much self-confidence now proclaim their hatred. "It is not time to build walls," Baez noted, "but to feed the hungry and dress who is naked."

The generosity of this admirable woman was reaffirmed with the invitation to Amancio Prada to sing in good Galician ‘Goodbye rivers, goodbye fonts’, that farewell of Rosalia de Castro that on an occasion like this sounded even more ‘dying’. Just as it was difficult not to feel a chill this time with a particularly moving verse from box The boxer ’:" I'm leaving, but the fire still remains. " But Joan Baez shunned drama and sentimentality. He just said he was "cheerful, but sad" and "Thanks to life", Violeta Parra's classic chosen as the last title before the bises, sounded more graceful, kind and Andean than elegiac.

Baez didn't even want to emphasize that Gabriel Harris, the percussionist of his accompanying trio, was his own son. There was not a single tear on this page for the story that marks the Universal Music Festival; if anything, the occasional tremor. The last batch of bises arrived, with 'They won't move us',' Donna, donna 'and' Dink's song ', and the last refrain, "Goodbye, my friends, goodbye", was caught in a wind this time more mesetary than' dylanita '. Because we still do not find many decisive answers, only as of today we will not even have the help of Joan Baez to look for them.