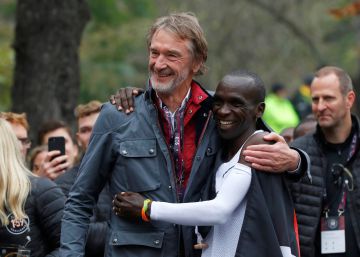 To a Kipchoge (born in a barn, in the Nandi language), Kipchoge Keino, the hero of Mexico 68, is considered the father of Kenyan athletics, which has dominated the background tests for decades; to another Kipchoge, Eliud Kipchoge, who lives in Eldoret, trains under the orders of Patrick Sang and receives massages from a compatriot who was trained in Cuba, it would not be exaggerated to consider him the father of a new way of understanding athletics, which funded by visionary entrepreneurs, rather than set records to capture the imagination and fantasy of society with their attempt to set sporting milestones.

The matter squeaks to old fans, digs into their contradictions, but, announce those who know the future, that this disruptive way, the buzzword, to grow athletics, to manage to speak with a new language, and fascinate, It is the only way.

The marathon world record path according to IAAF standards is 111 years old; the parallel path of the brand that changes history and sets its own standards, two.

The first was financed by Nike to prove that the shoes it manufactures are the best; the second, the English millionaire Jim Ratcliffe, who gave 11 million dollars to Dutch manager Jos Hermens to organize everything with the athletes he manages. In the staging of the demolition of the border of the two hours they have worked more than 100 people apart from those who have run and Ratcliffe cares about a cucumber that the IAAF does not recognize the hour, 59m and 40s as a world record. Nor does it take away his dream to know if the international federation will ever homologate the shoes that Kipchoge wore, at the border of technological doping because of the extraordinary returns of energy that they say produce their springs.

“The most significant of the test is that the hares were some of the best athletes in the world, athletes accustomed to rival each other, not to help another to get a mark. That is only seen in cycling, it had never been seen in athletics. And they had fun doing it. I enjoy two things, sport and extraordinary challenges, ”says the owner of petrochemicals Ineos, who also owns a cycling team (and Froome, without crutches, is also in the Prater) and Nice football. “And this marathon seemed impossible. I am the happiest man in the world. The final stretch of Eliud was a glorious moment. ”

Ratcliffe, who speaks as a patron or a philanthropist would speak, does not have in mind to finance any other athletic challenge, but one that he considers more difficult than anything, to get the British challenge to recover the Copa América sail. "In 170 years we have not managed to win it," he says. "We organized the first challenge in 1871, we lost it and that's how we are."

LaLiga: Possession and passes of the Guardiola era | sports