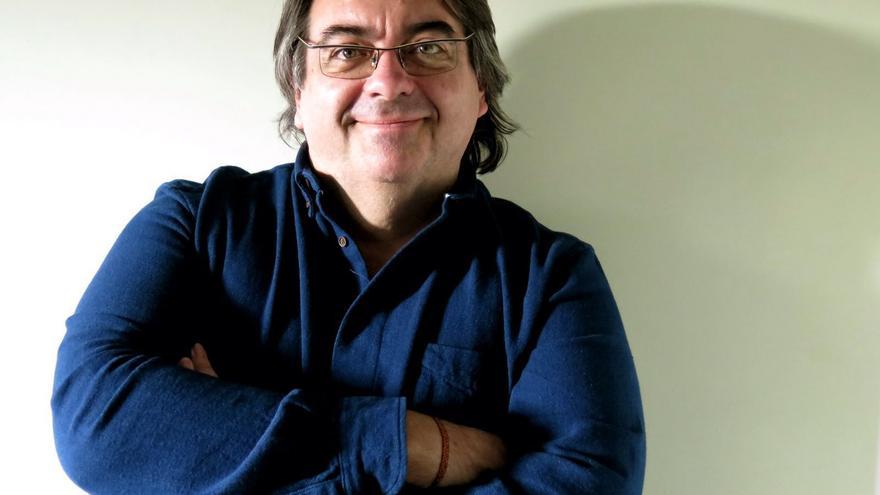 Jesús Ruiz Mantilla (Santander, 1965) has been brave when he dared to sink his teeth, narratively speaking, into the terrible crisis that journalism is going through. Curiously and despite its literary possibilities, this topic has been little approached from the field of the novel and the author of Paper (Galaxia Gutenberg) attributes this lack to a mixture of prudence, fear and lack of historical distance with this phenomenon that has broken all the information schemes. Threatened by political and economic interests, disconcerted by the emergence of the Internet and the need for new business lines to replace the classic ones, anchored in a false debate between digital and print, journalism is experiencing its greatest cycle change since they appeared. newspapers two centuries ago.

“This novel haunted my head,” says its author, “for a decade, since I saw the image of an absolutely empty table in a newsroom, only occupied by a computer, compared to others that were crammed with papers. two very different worlds coexisting in the same space, a situation that has occurred in all media prior to the Internet, from The New York Times to the Montañés newspaper. Now, I believe that it is not a question of choosing between digital and print journalism, but between good and rigorous or bad and dishonest journalism. Fortunately, in recent times there has been a pact between the most veteran generations of journalists and the new promotions to achieve a synthesis of the best virtues of one and the other in favor of dignity of the profession “.

A cultural journalist with a long career at the newspaper El País and the author of several novels and essays, Ruiz Mantilla uses two recent films as examples of successful portraits of journalism: Shadow of power (Kevin Mac Donald, 2009) and The Pentagon Papers (Steven Spielberg, 2017). However, Spanish cinema, like literature, emphasizes the author of Paper, has dealt very little with the crisis of journalism with all its economic, labor and ideological consequences.

Ruiz Mantilla is clear, like so many professionals, that the independence of the media has been and continues to be in question. “Journalists,” he points out, “have lost independence and political powers and banks have vampirized our blood. And our blood is called independence. Advertising crisis, lack of business model, staff cuts and a long etcetera summarize recent history. of the sector that now seems to glimpse the end of the tunnel through paid subscriptions and after some owners begin to understand that it is necessary to regain credibility. It should not be forgotten that the new journalism offers many possibilities such as the documentary series that are booming”.

In any case, this affable journalist who has interviewed a multitude of characters from the world of culture and politics confesses that his greatest fear points to hoaxes, the so-called fake news, which he describes as “one of the greatest dangers, the new atomic bombs, against journalism and democracy.” From Donald Trump to Isabel Díaz Ayuso and Santiago Abascal to Jair Bolsonaro or the Brexit campaign, this war of disinformation threatens to erode democratic institutions.

In Ruiz Mantilla’s opinion, it is an open fight of good against evil in which “lies travel at the speed of light while the truth advances much more slowly.” After proposing to increase our critical sense and democratic controls, the novelist mentions the role played by Vladimir Putin’s Russia, “which plays to destabilize the European Union”, or the authoritarian drift of the Trump era, “which was the summit of manipulation in collusion with big tech companies. “

All of this is nourished Paper, a thriller set in a large newsroom in Spain today and with an extensive gallery of characters, some of them very recognizable. From a plot of intrigue Ruiz Mantilla travels the worlds and underworlds of the profession, among them the little-known and gangster rumors makers. Meanwhile, the common thread is marked by some of its various protagonists, ranging from media directors to interns, from CEOs to reporters.

In the background beats the hectic atmosphere of a newsroom that fights for a future on a path full of external and internal obstacles and that is torn between analogue ink and digital screens. A kind of voice-over, that of the first-person narrator that alternates with the third-person story, reveals the adventures of the protagonists. Jesús Ruiz Mantilla explains why he chose this option to narrate this thriller: “I wanted a journalist to tell the story as a vindication of professional rigor. In fact, the narrator is in some way asking readers to trust him because he tells with the documents and testimonies that prove that his narration is true. ” In a key between reflective and hooligan, the narrator recommends books or music or quotes writers such as Walt Withman or Octavio Paz.

The final section of writing the novel, to which Ruiz Mantilla has dedicated four years of research and writing, surprised the author during the terrible outbreak of the pandemic that he decided to incorporate into his narrative. “I couldn’t get around this catastrophe by talking about a story from today,” he says. Despite being a dark novel, in the words of its author, Paper it also points to hope, to the passion for life. The contrast between the death of a veteran journalist, buried only with the presence of three close friends; and the birth of the son of a couple of young editors related to that one symbolizes that crossroads in which journalism moves today.