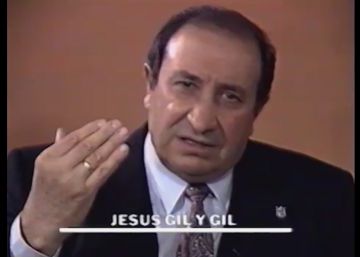 Question. Is it possible that he has forgotten how popular Jesus Gil and Gil became?

Justin Webster. It had delusions of greatness. During a time, after winning the mayoralty of Marbella for the second time with an absolute majority and when Atleti won the League, he believed that there was no limit. That he could be president of the government. The only figure he perhaps respected was the King. But he felt that, below the crown, no one could compete with him. At one point in the series, he boasts that he is the most popular person in Spain, even more so than the Pope. He does it by quoting a survey that I do not know who would do it or how, probably a private survey.

Enric Bach. But it does not surprise me. In those nineties, television gave it a popularity that few people have had. He went to any program and audiences went up.

J.W.: It was the cover of the magazine of The Guardian in 1995. And in The New York Times. It was a phenomenon.

P. But we are talking about a man detached from the law and the common good, a corrupt manual. What does Spain say about its popularity?

J.W .: I remember at that time, when you wrote from here in a newspaper, you always put "the young Spanish democracy". The democratic culture was being formed after 40 years of Francoism, and on the one hand the democratic code was mixed, and on the other the code I will not say Francoist, but pre-democratic. Democracy is quite complex, you have to believe in many things and have many mechanisms to make it work. He was a businessman from another era, and for him it was normal to go from saying to doing. I do not think it was expressly undemocratic, but he had no problem saying, "There are things to do and this about permits and laws and judges is superficial".

P. Those "things to do" included turning rustic land into buildable, embezzling or buying judges.

E. B .: In the nineties, when Gil arrived, there had been population growth and the city was not adapted to that demographic reality. He promoted urban development, but he confused the end with the means. The means were terrible.

J. W .: He had an overwhelming personality. And there were things that were invisible to him. Legality, institutions … He never understood them, or he chose not to know anything about them. So it was a very dangerous force of nature: that personality and that blindness.

P. He won three mayoral elections spectacularly. How possible that his ideology was a mystery?

E. B .: There is a phrase that he always repeated: that his idols were Franco, Jesus Christ and Che Guevara. He also used to say that at nine in the morning he was a communist, at ten socialist and at eleven, on the right. Actually maybe it was none of those three things. I asked his son Óscar who he thought his father would vote today and he told no one, only himself.

P. An entrepreneur who is enriched by football, brick and politics is perhaps very Spanish; but a new rich as disinterested in the elites as Jesús Gil was, not so much.

J. W .: What motivated him was recognition. Not so much money. I wanted them to talk about him, right or wrong, but to have him in the spotlight.

E. B .: He felt part of the street but at the same time he felt himself a successful man, and he wanted to be recognized. He knew that he did not belong to the elites, that he came from another side.

P. And did you get that love?

E. B .: Many people in Marbella defend him and blame others for his legacy. There is a phrase that I like, from a chronicler of when Gil was running for the Atlético de Madrid elections: "Gil seduces and scares". I think it sums up very well what it caused. Fascinated and awoke, in the case of Atletico, the desire of fans to be a big club, not always look at the rival, Real Madrid in this case, from below, but with some pride. At the same time, it was already intuited that the ways in which things were going to be managed were going to be very unorthodox.

P. Not even his best moment was able to export his formula to the national terrain. Is it possible that without the closeness of that personality?

E. B .: In an election he appeared in Andalusia and I think that even in Marbella he got fewer votes than in the mayor's office. In 2000 he tried to present himself to some European and failed. But the municipal expansion did work for him. In 1999 it was the most voted force in eight of the 13 municipalities to which it was presented. Maybe we were still living in a time when people when voting for a deputy bet on the big parties.

P. Today, with social networks, would it have been easier?

E. B .: Trump's use of Twitter he would do the same. I would not have filters. But in the nineties television was the great medium and he already exploited it thoroughly. And now we are more critical than then.

P. But phrases like "I need to win by an absolute majority to show the usual people that we are here", that the loose in rallies, do not they sound a bit like Trump?

E. B .: There are elements that are likely to be repeated in these businessmen who get into politics and challenge the establishment: they know how to get to the hearts of voters by communicating simple ideas. But his party was very particular. He as a politician too, and is hardly comparable to Trump or Boris Johnson. In the series we do not make references with them because it seemed to me that the spectator himself would already connect it with his current reality. Then, yes, Gil's story is that as a society we are fragile because that kind of messages seduce us and we want leaders to solve our problems in a fast way.