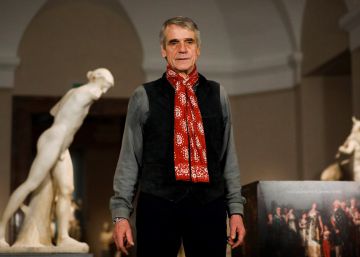 Title: Painters and Kings of the Prado

Original title: The Prado Museum. A Collection of Wonders

The powerful voice of Jeremy Irons (Cowes, United Kingdom, 71 years old) sounds like a Shakespearean theater sifted by a lot of nicotine. Tall, skinny and elegant, it retains all the magnetism of the performances for which it has accumulated the most important awards of cinema and theater with works as well known as The mission, Wound, Lolita, Return to Brideshead, The Man in the Iron Mask or The House of Spirits. In his last performance, Painters and Kings of the Prado, a documentary directed by Valeria Parisi that premieres next day 9 in 200 Spanish theaters, guide the viewer through history and every corner of the Prado Museum. The actor has presented the film in the room dedicated to the Roman workshop of the museum, before Ariadna asleep. Javier Solana, president of the patronage of the art gallery, said he liked the project because, within the bicentennial events, it represents something warm and sophisticated about the life of an institution he likes to refer to “as a museum of the peace. "

As Irons himself tells, over 90 minutes the film overflows the documentary label because it combines “painting, nobility, passion, courage, history, theater and photography. It is a fusion of souls. ”

The journey begins with Jeremy Irons contemplating The glory, the famous painting of Titian that moved Emperor Charles V. And from there the route, not chronological or linear, makes the viewer know the scope of the Empire, the war against Napoleon, the loss of the colonies or the transfer of the paintings during the Civil War . The actor talks about all this walking through Yuste, El Escorial, Toledo, Madrid and, of course, the most decisive spaces of the Prado Museum, including the restoration workshop and the Kingdom Hall.

Before some pictorial jewels like The descent by Rogier van der Weyden, The Lavatory from Tintoretto, Las Meninas from Velázquez or The shootings Goya, Irons gives way to the museum's conservative experts, including its director, Miguel Falomir. And also five women of special relevance in the Spanish culture: the set designer Helena Pimenta, the dancer Olga Pericet, the photographer Pilar Pequeno, the president of the García Lorca Foundation, Laura García Lorca, and actress Marina Saura, daughter of the painter Antonio Saura.

Declared art lover in all its manifestations, Jeremy Irons apologized for greeting in Italian with an enthusiast buongiorno and answer the questions of journalists in English. He celebrated the opportunity to visit Madrid again because he loves dancing, food, streets and people and he was excited how the filming nights had been in the halls with the museum closed. “It has been a fascinating experience. the producers, Italians, had everything very well organized so that each intervention was done with a single shot. I let myself be directed. I can say that it has been a very satisfying and painless experience. ”

When asked to choose between Velázquez, El Greco and Goya to make him a portrait, he thinks about it for a long time to finally answer that he would choose the young Goya. “Velázquez would make me a superficial portrait and El Greco would not take the good side out of me,” he finishes laughing.

If I could, what picture would you take home? Extending his arms, Irons replies that there is no possible answer. "Maybe The merines or some Goya because I like them all. But, you can't choose just one. ”

After knowing in depth a collection very identified with the Italian painting and especially with the Venetian one, Irons comments that some representation of the British painting is missing. Put to include some work done by a countryman, he answers without hesitation that it would include a landscape of Turner, “one of those marine scenes in which a ship is seen at dawn wrapped in the dazzling beauty of nature”.

And finally he gives advice to the youngest: to watch the documentary, to visit the museum and to raise the head of the screens of their mobile phones to contemplate their surroundings, talk to each other and become better human beings.