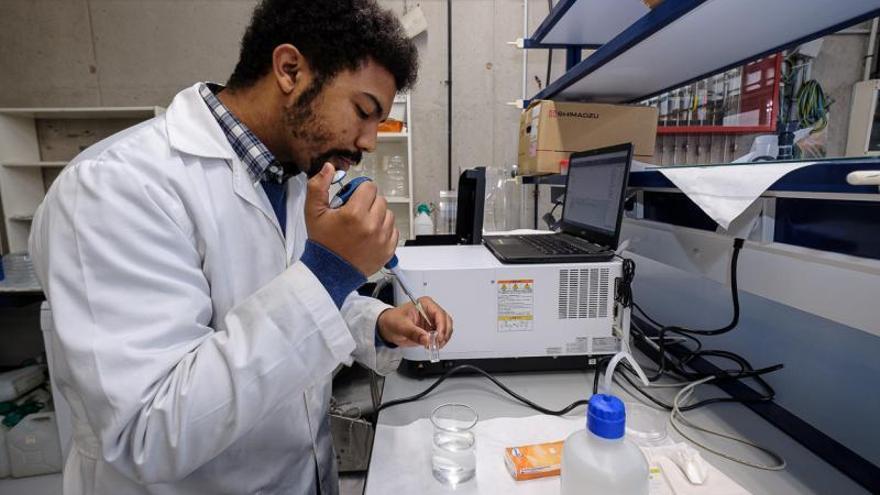 High concentrations of jellyfish constitute a threat to the zooplankton and the fish larvae in the Canary waters. This is one of the conclusions of the doctoral thesis carried out by Daniel R. Bondyale, researcher of the University Institute for Research in Sustainable Aquaculture and Marine Ecosystems (IU-Ecoaqua) of the University of Las Palmas de Gran Canaria, in which he develops a pioneering technique that advances in the metabolic study and allows to evaluate the energy content of these organisms.

“To sample jellyfish at great depth, nets and techniques are used that easily damage these organisms that are included in what we call gelatinous plankton, with which they do not usually reach the surface alive and that makes any study difficult. With the enzymatic techniques that we have developed, we offer the scientific community the possibility of measuring the metabolism in jellyfish even if they are damaged ”, said Bondyale about one of the novelties of his doctoral thesis, directed by May Gómez and Theodore T. Packard of the Eomar group of Ecoaqua, defended on April 22 with the result of outstanding cum laude.

Research by Daniel R. Bondyale estimates, based on the demand associated with metabolism, that large concentrations of jellyfish Pelagia noctiluca of 20 grams per cubic meter would have serious consequences on the populations of zooplankton and fish larvae in the waters surrounding Gran Canaria. A circumstance that could take place in blooms like those that arrived in 2012, when ten tons of jellyfish were collected on the beach of Las Canteras, and that could affect the traditional fishery to some extent by reducing the amount of fish and food available.

“We have focused on respiratory metabolism, because respiration tells us how much carbon the body requires to satisfy the minimum requirements it needs to be alive. The metabolism informs you about how much the body needs to eat and that is why we connect it with predation, because when we know how much the jellyfish needs, an organism that forms huge aggregations of individuals, we can calculate how much food it will need ”.

During the study, the content of proteins, lipids and carbohydrates in jellyfish was also measured, basic measurements that have not been carried out much in the jellyfish because they are not considered a food. “However, the reality is that there are many organisms that feed on jellyfish, and here the issue of their fragility comes into play again, as they are so fragile, when they want to analyze the digestive system of fish, squid or turtles, they find that they cannot determine if they have eaten them or in what quantity, because they are digested faster than the skeleton of crustaceans or fish bones, for example. A more sophisticated determination of their composition could point to medicinal reasons and others, but the first step to get closer to better understanding why they eat jellyfish is this basic measure of proteins, lipids and carbohydrates, which will give us an idea of ​​their energetic content".

In Dr. Bondyale's research they have worked with four organisms: Aurelia aurita, Pelagia noctiluca, which are the most widely known jellyfish, and as the main novelty, with two hydrozoans, a siphonophore and a colonial hydromedusa, the Physalia physalis and the Velella velella. These last two are particularly interesting because they have not been studied much. They usually arrive in the Canary Islands and we thought that we should work with an organism that was more relevant to our environment, and this is the first time that we studied their breathing, something that had never been done in both due to the difficulties of working with them since they float in the surface of the ocean.

As a novelty, they have measured the composition of Physalia and Velella, and have seen that despite being encompassed as jellyfish, they have quite a different composition, peculiarities that may be related to the number of predators that feed on them, such as turtles or fish. with which the hypothesis is opened that its contribution to the ecosystem could have more weight than is thought.

The thesis opens the door to the possibility of working with Physalia, which is more than an organism a floating colony. "We understand life in terms of individuals that function separately, but there are organisms in nature that form absolutely dependent colonies, and in the case of Physalia, what we think are tentacles on many occasions are many individuals united, forming part of that colony ”, pointed out the researcher. In addition, it could lead to the design of a jellyfish monitoring strategy, so that the Canary Islands could have a contingency plan and "better understand what meteorological, atmospheric or oceanic phenomena lead them to arrive here", concluded Daniel Bondyale.