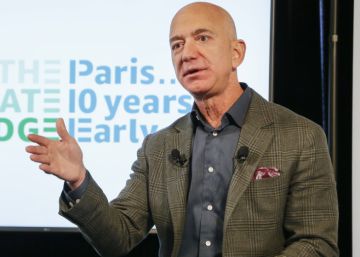 He was five years old when, in July 1969, he saw Neil Armstrong walking on the moon on television. A momentous moment in the life of Jeff Bezos. “I remember watching it from our dining room television and the enthusiasm of my parents and my grandparents. Young children can catch this state of mind. When it happens something extraordinary, they are able to perceive it. That day space became one of my great passions, ”recalls the founder of Amazon. That interest made him a fan of Star trek, a series that in turn aroused interest in computers. In fact, as stated in the book Create & Wander. Life and reflections of Jeff Bezos (Planet) discovered that he could play a video game about space on a terminal in the computer room of the primary school in which he was studying in Houston, where his father worked for Exxon. His mother also encouraged his curiosity about electronics and mechanics and let him convert the garage from his house in a laboratory of scientific projects. Graduated in engineering electronics and computing at Princeton, He started working in the financial sector, but was attracted by the growth and possibilities offered by the computer network. He got on that train, opening an online book store. This is how Amazon started operating in 1995, which today is worth 1.3 billion euros on the stock market.

1. It all comes down to the long term. He always considered that one of the keys to business success is that the value that is created for the shareholder is sustainable. And this means that “the stronger our market leadership, the more powerful our economic model”. Because of this emphasis on the long term, it ensures that they make decisions and raise compensation differently from other companies, and without taking into account short-term profitability considerations or Wall Street reactions. And instead of “timid investment decisions, we will make bold decisions where we see the likelihood of obtaining market leadership advantages,” says Bezos.

2. Obsession: customers. According to data from the company itself, more than one hundred million people are members of the Amazon Prime subscription service. Their goal is to have the most customer-oriented company in the world. He knows that they are chosen for the offer, for the ease of use, for the prices and the service. “But there is no rest for the tireless. I remind our employees to be afraid, that every morning they wake up scared. Not from our competitors, but from our clients ”.

3. Think financially. Your main financial measure, and the one we want to use in the long term, is available cash flow per share, driven by increasing the amount of operating profit and efficient management of both working capital and equity investments.

4. Decision making. Many of the decisions that are approved on Amazon are based on data. “There is a correct answer and an incorrect answer, a better and a worse one, and mathematics tells us which is which.” For the opening of a logistics center, for example, they use the history of the current order management network to calculate peak periods and create alternative models to gain greater capacity, in addition to taking into account the expected product portfolio, including the weight and volume of the products to decide the space. “Quantitative analysis improves the customer experience and our cost structure,” says Bezos, who assures that the most effective formula is to combine data analysis with the will to make bold decisions.

5. Find the root of the problem. “I am also an Amazon customer, and sometimes I also have problems with an order,” says the businessman, who treats this problem in the same way as those who reach him through his email address, [email protected], (Despite the enormous amount he receives, he notes that he reads many of them). “People write to us because we have done something wrong and I ask the Amazon team to do a study of the case and, after finding the real root of the problem, really solve it.”

6. Build wealth. He confesses that he has never tried to get the title of richest man in the world: he is, with a fortune of more than 185,000 million dollars, according to data from Bloomberg. “I wanted more to be known as an inventor, an entrepreneur or a father. These things are an indicator of the results achieved ”. And it values ​​the value generated for other people, through the company’s listing. “I believe in capitalism based on entrepreneurship and free markets.”

7. Competition. To sustain the ability to invent, you need the right people, innovative people. And to compete with other companies it is not enough to be one of the best. You have to be the best.