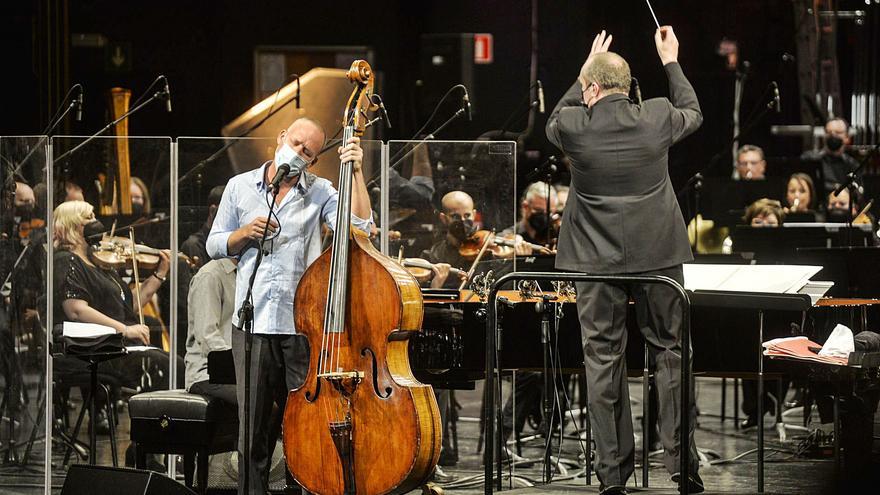 The Israeli musician, who today performs at the Auditorio de Tenerife, took the stage accompanied by the musicians of his band who are the Azerbaijani pianist Elchin Shirinov and the native New Jersey drummer Mark Guiliana, but sharing the experience with the Tenerife Symphony Orchestra , directed by Bastien Stil, with whom they have been rehearsing these days.

Thus, the spectators could enjoy, wrapped in symphonic arrangements, songs as seductive as the traditional Morenika, in addition to numerous popular melodies, some standard of the genre such as Nature Boy and new songs such as When I’m Falling, which testifies to the autobiographical dimension who has acquired his work in recent years.

The 30th edition of the Canarias Jazz & Mas International Festival will tour the eight islands through more than 50 concerts and 30 projects that complete one of the most ambitious posters in its history. Apart from the figure of Avisahi, in the program the presence of the greatest figure of New Orleans music stands out with the project The Jazz at Lincoln Center Orchestra with Wynton Marsalis, or that of one of the most important groups of the moment through the Snarky Puppy.

To all this we must add classical and emerging figures of the first line such as the pianist Fred Hersch, in trio format; the marvelous voice of Liv Warfield; the virtuosity on the guitar of Julian Lage; and the ease of a good number of bands that this year with projects related to jazz, such as soul or funk.

To all of them we should add José James and his stylistic richness based on neo soul, hip hop and drum ‘n bass; the large group that gathers around the Brooklyn Funk Essentials; the Latin rhythms edged with soul and funk of the Cubans Cimafunk; the garage soul of The Buttshakers, or the always surprising crossbreeding of Latin jazz with which Patax arranges songs by great artists, this time they arrive with the twisted Beatles repertoire.

Jazz fans unanimously praise the lineup to the point of calling it one of the best in its history. Thus, Manuel Méndez highlights the effort of the organization in an “edition in the middle of a pandemic” and even more so taking into account “how are the complications of performing concerts.” Méndez highlights the presence of Wynton Marsalis and Avisahi Cohen “which comes in a quite new format because it is risking the classical music of a symphony orchestra with jazz.” Alberto Acosta, for his part, stresses that “we had been a bit lazy for a few years, but what happened is spectacular.” Acosta highlights yesterday’s performance “with one of the best double bass player out there” and that of Marsalis as “the only musician who at the age of 24 won a Grammy for the best jazz album and another for classical music.” The presence of the American has been very difficult to achieve “because he did not like to travel” and he recalls that ten years ago he traveled to Barcelona to see only him.

Finally, Tony González, defines it as “one of the best posters that there has been, very varied and, apart from highlighting the two previous musicians, it remains“ with the most playful part that takes place outside with the stages of the Santa Catalina or Santa Brígida “in a cozy little park.” In his opinion, it is a very varied festival in which soul, jazz and funky are successively mixed.