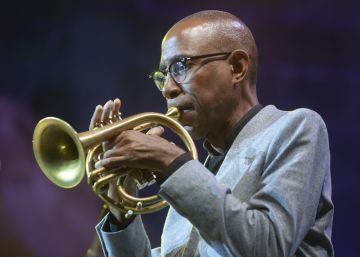 It was six o'clock in the afternoon, in Donostia-San Sebastián it rained incessantly from the morning, and the forecast said it would be like this all day. At that same time, in Trondheim, Norway, the day was sunny and there were 29 degrees of temperature at the precise moment when, not without some meteorological irony, the Scandinavian supergroup Atomic and the Trondheim Jazz Orchestra occupied the stage of the Kursaal to offer one of the most desirable concerts of the present edition of the Heineken Jazzaldia. To begin with, because it is not easy to listen to groups of Atomic's size and profile at summer festivals, much less with a special project like this, in which the training is expanded to reach the dozen instrumentalists. But above all because, 20 years after its debut, an Atomic concert continues to predict an imposing jazz experience.

Actually, those who played in Donostia were not so much Atomic as four of the five legs that support it since its inception: the pianist Håvard Wiik, the saxophonist Fredrik Ljungkvist, the bassist Ingebrigt Håker Flaten and the trumpeter Magnus Broo, all of them soloists line on the European scene and leaders of numerous parallel projects. Together with his young Norwegian companions, they played in the Kursaal a handful of originals that were a true musical journey, rich and varied, taking us from the heritage of the orchestral Charles Mingus to the free jazz European chamber, always with sense and with excellent solo contributions. A luxury for the ears, and indoors, in addition, that on a day like that was no small matter.

"If we were in California, this concert would have been canceled without a doubt," said Joshua Redman a couple of hours later, marveling at the stoic audience wrapped in plastic ponchos that crammed the Plaza de La Trinidad, as if being soaked was its natural state . It did not stop raining for a moment during the Still Dreaming concert (group with the appearance of a collective, although led de facto by Redman), but the public endured delighted, perhaps imprisoned by the memory of other unforgettable nights that Jazzaldia lived - and remember - passed through water.

Still Dreaming was born as a kind of tribute to the Supergroup Old And New Dreams, one of the most interesting jazz formations of the 70s and 80s, composed of Dewey Redman —Joshua's father—, Don Cherry, Charlie Haden and Ed Blackwell. Beyond the wink to dreams in his name, the alignment of tenor sax, bugle, double bass and drums, and the surname and kinship among his saxophonists, the similarities between one group and another begin to fade. While it is true that the approach to the original Still Dreaming themes tries to evoke the sounds of Old And New Dreams (inspired, in turn, by the original Ornette Coleman quartet), and that they do not hesitate to rescue compositions of their members, The style and form of expression of Redman Jr. or double bass player Scott Colley, for example, are at the opposite of those of that magical combination of personalities. They do not lack potential as a group, of that there is no doubt, even with the replacement of drummer Brian Blade by the less dynamic, although very capable, David King, founder of The Bad Plus, but listening to them gives the feeling that they are still to be found a consistent group voice.

At the same time, the presence of Ron Miles, one of the great undervalued soloists of jazz in recent decades, brings to the project a huge dose of sophistication: in Donostia his solos, almost always in contrast to Redman's hypertrophied phrasing, highlighted as beautiful miniatures that raised the whole through suggestive melodic lines and a fragile and melancholic tone of great beauty. Redman, a saxophonist who, according to the project - or the moment - in which he is, can give the best or the worst of himself, showed in some moments of the performance a somewhat sterile, urgent and more indebted language of his overwhelming technique that of inspiration or a thoughtful eloquence. With Redman, sometimes, it is like this: one day it sounds like a real wonder and another one like an instrument gymnast; in Jazzaldia it was not one thing nor the other, but in general it was closer to the latter.

As a kind of poetic link between Atomic and Still Dreaming, the vocalist Neneh Cherry, a Scandinavian by birth and, like Redman, daughter of a founder of Old And New Dreams: Don Cherry, closed the night at the Green Stage. The vocalist returned to Jazzaldia seven years after her last concert at the festival, when she presented her busy project with the supergroup of free jazz The Thing (precisely with Atomic double bass player, Ingebrigt Håker Flaten) in La Trinidad. On this occasion, Cherry presented radically different music, based primarily on his latest album, Broken Politics.

Perhaps as a sign of solidarity with the public that waited for her in the rain on Zurriola beach, Cherry appeared on the scene wrapped in a plastic poncho similar to those that invaded Jazzaldia enclosures yesterday, and did not abandon it until the third night theme, Deep Vein Thrombosis. By then the concert was already reaching a good level, despite a staging perhaps too sober, and ran between the magnetism of the leader, the strategic distribution of classic hits like Woman or 7 Seconds and a Showwhich at times also proved a bit linear. The night did not accompany, everything must be said, and although the rain returned immediately, the public held on. Resigned, yes, but smiling.