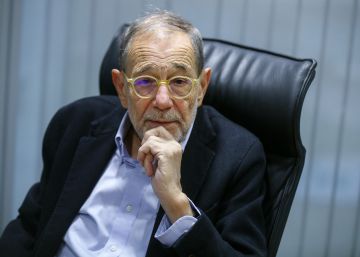 The meeting of the Royal Board of Prado Museum scheduled for tomorrow Thursday includes in its agenda the appointment of a new president of this body, a position that has been vacant since death of José Pedro Pérez-Llorca, last March. As established, the position will be filled by one of the members by appointment who will be elected by the full board and appointed by the Minister of Culture for a period of five years. Javier Solana (Madrid 1942) it is shaping up as a favorite, thus closing the long history of the socialist politician with the Madrid art gallery.

He was Minister of Culture in the first Government of Felipe González, position that he combined with the spokesman of the Executive, before occupying the portfolio of Education and Science, and later the Foreign Affairs, since he left to make the leap to Brussels in mid of the nineties as Secretary General of NATO, and to be appointed High Representative of the Council for the Common Foreign and Security Policy of the EU for a decade (1999-2009). The work of Solana with the Prado in the eighties determined the constitution of the Museum as an autonomous body attached to the Ministry of Culture in 1985, a decisive step in the modernization of the art gallery.

Solana appointed as director of the Prado to Alfonso Pérez Sánchez -Which was at the head until 1991- and promoted together with his undersecretary, Miguel Satrústegui, and the lawyer Rodrigo Uría the struggle in the British courts to recover the Goya painting The Marquise of Santa Cruz, that today is part of the Museum's collection. That bizarre episode ended with the withdrawal of the work of an auction at Christie's and the payment of the Spanish State in 1986 of six million dollars to the owner as compensation. It was the first time that private donors were sought to raise the sum, and that was how a first contact was established with Baron Thyssen and his wife, which would result a few years later in the acquisition of his collection and Constitution of the Thyssen Museum in the early nineties. Uría declined to charge fees, but asked to enter the patronage of the Prado who came to preside from 2004 until his death in 2007. He was succeeded in the position Plácido Arango.

Created in 1912, almost a century after the birth of the Museum, the Royal Board of Trustees acts in full and in permanent commission, and determines the lines of action of the art gallery. Its president holds the institutional representation. As Minister of Culture Solana was president of the Museum, but it was not until his return to Spain in 2010 that the politician graduated in Physical Sciences returned to the Royal Board of the Prado, body that has been expanding its number and that today includes more than 40 members. The vice-presidency is held by Amelia Valcárcel and Bernaldo de Quirós. The architect in charge of the first extension of the museum, Rafael Moneo, the historian Sir John Elliott, the former director of the Metropolitan Philippe de Montebello or the businesswoman Alicia Koplowitz they form part of this patronage, as well as the former minister (also former president of the Board) Eduardo Serra. The new extension of the Prado, with the annexation of the old Army Museum and the Hall of Realms, is the main project that the art gallery has ahead and in which the Royal Board and its president will have to turn over.