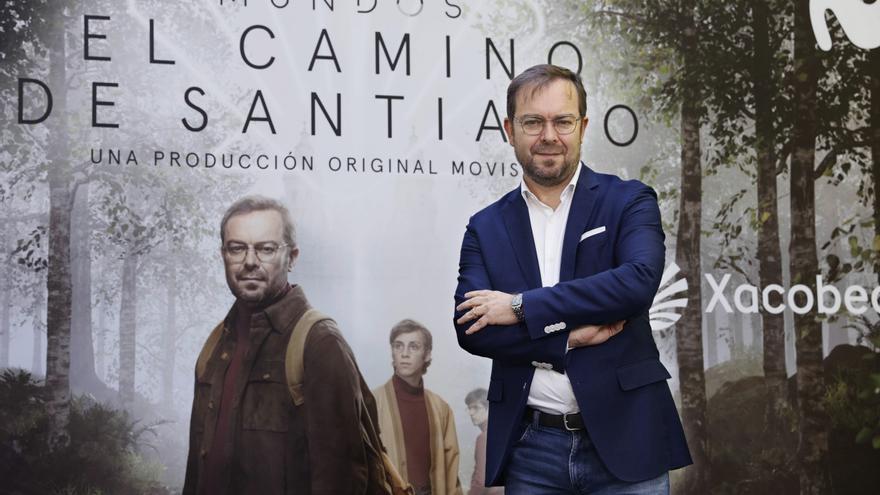 The documentary series 'Other worlds: El Camino de Santiago', produced by Movistar + and La Caña Brothers, and hosted by the writer Javier Sierra, will portray, from June 7, the Camino de Santiago "more mystical" through its symbols, myths and legends, "offering a new perspective that moves away from the topics that surround the Compostela pilgrimage".

This is how its creators have defined it this Friday at the press conference to present the series, held at the International Center for the Reception of Pilgrims in Santiago de Compostela. In addition to the program's host, Javier Sierra; The head of Factual and Non-Fiction of Movistar +, Mariajo Larrañaga; the executive producer of La Caña Brothers, Alejandro R. Morales; and the first vice president of the Xunta de Galicia, Alfonso Rueda.

Javier Sierra has valued the objective of the series: "To transmit the desire to do the Camino", especially in the "incomparable setting that is a double Jacobean year".

"This is a series that aims to take the viewer on the true Camino de Santiago. It is not a tourist trip, nor a walk through the heritage or the richness of the landscape. It is an incursion into the original essence of a route that has been running for 1,000 years and that has been and is the backbone of the history of Europe.", explained the writer.

In this sense Alfonso Rueda has also expressed himself, thanking Movistar and Javier Sierra himself for their "commitment" and "support" in promoting the Camino de Santiago, "especially in such a special year as the Xacobeo".

Rueda has pointed out that the arrival of pilgrims to the Galician capital "is progressing at a good pace" and that, although there is still room for improvement, "the sensations are good". "The pilgrimage will pick up cruising speed, thanks in part to projects like this one," said the vice president of the Xunta.

"It is impossible to explain to those who have not done the Camino what it feels like. That is why I encourage everyone to travel it, each one will find a different path and motivation," said Rueda, who stressed that the Jacobean route represents "everything. what travelers can look for in times of pandemic: open spaces, not overcrowding and pause, among others. "

Sierra has emphasized that 'Other worlds' will teach the viewer to interpret the symbols of the road, "not the current ones, but the millennial ones, those who have always been there." To do this, the three chapters that make up the documentary series will address three different myths present on the route.

In the first episode, the program will address the story of San Virila, abbot of the Monastery of Leyre, whose legend says that he traveled in time almost 300 years. In the second chapter, they will stop in Santo Domingo de la Calzada to tell the legend of his rooster and his hen; And already in the third - which tells of the arrival in the Galician capital - Sierra will delve into the myth of the 'Vakner', a kind of werewolf that the pilgrims faced on the last stretch of the road.

The presenter of 'Otros mundos' has also pointed out that, despite the different plots of the episodes, the viewer will find a common thread in the figure of Soriana Sister María Jesús de Ágreda, the nun responsible for 'The mystical city of God', one of the "most important baroque texts in Spanish" and in which the Jacobean pilgrimage is addressed.

For their part, both the producer of La Caña Brothers and the head of Non-Fiction of Movistar +, have underlined the "new ways of narrating" included in this series, which uses animated and cinematographic reconstructions to represent the time jumps of the legends. "It is the first that these techniques are used in the program and it has been a challenge, but we are very happy with the result," said Alejandro Morales.

Although the writer will follow the French Way and will begin his journey in Somport (Aragon), it will be the board game of the goose that will guide him on his pilgrimage. "The game of the goose is closely linked to the Camino de Santiago, as can be seen by boxes such as inns and bridges," said Sierra, who has seen in this game another way of representing the most mysterious face of the Camino.

The Jacobean special of 'Other worlds' will also portray locations such as O Cebreiro and the temple of Santa Eulalia de Bóveda, in Lugo; Portomarín or Fisterra, where many pilgrims usually go when they finish the Camino.

"As we did not want to stay once more in the topics, we have gone a step further and, after Compostela, we also visit other areas such as A Costa da Morte", highlighted Sierra, who on his pilgrimage will be accompanied by guests, some of them with a strong connection to the Camino, and others "more personal", such as its first editor.

"We have not wanted to boast of having shot in a pandemic, despite the striking silence and loneliness of the Galician capital that are reflected in the episodes," insisted the host of the program, since the documentary series "will survive for a long time" , beyond the pandemic or the Jacobean year.