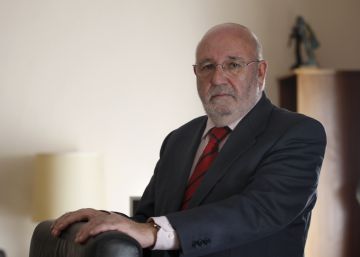 Javier García Fernández (Madrid, 1949) returns to the Ministry of Culture. Last October at age 70 he was dismissed due to retirement from the position of undersecretary for the then minister José Guirao, but yesterday the Council of Ministers, at the request of Pedro Sánchez, has approved his reinstatement in the ministry. García Fernández will be the Secretary General of Culture, a newly created governing body, with the rank of undersecretary, according to the Royal Decree issued.

Professor Emeritus of Constitutional Law, Javier García Fernández is a veteran who has been part of the governments of the three socialist presidents. Now he regains his previous responsibilities by being under his command the general directorates of the Book, Cultural Industries and Fine Arts. He will report directly to the minister, José Manuel Rodríguez Uribes. For its part, the Undersecretary of Culture, Andrea Gavela, remains in control of the ICAA, INAEM, National Library, Prado Museum and Reina Sofía Museum. The rest of the organizational chart of the cultural area of ​​the ministry remains the same as it was with former Minister Guirao. Thus, those responsible for INAEM (Amaya de Miguel), ICAA (Beatriz Navas), Fine Arts (Román Fernández Baca) and Cultural Industries (Adriana Moscoso) come from the previous team and maintain their functions. A novelty is María José Gálvez, the new general director of the Book. And another, the chief of staff, Mónica Serrano, who lacks experience in cultural management, such as the minister himself and his undersecretary.

García Fernández turned 70 in February 2019 and as established by the public sector legal regime, he was due to retire. Culture sources ensure that the new position is a position of free designation and therefore the requirement of being an official is not essential. “We need your knowledge to undertake the reforms of several laws,” those sources point out.

The veteran manager is one of the parents of the 1985 Historical Heritage Law and one of its objectives with Guirao was to reform it, including the milestones of the Industrial, Intangible and Audiovisual Heritage. The draft of this reform is finalized and it will be one of the star operations of the new legislature. García Fernández is a public aid advocate for heritage defense associations, because he thinks that the future of artistic and historical legacy lies in citizenship: “The more civil society is strengthened, the more protected the heritage will be”He said in public. Their commitment has always been to increase the economic endowment in the budgets for these associations. In addition, from the new position García Fernández is called to be one of the main engines of the future reform of the Patronage Law.

The political career of García Fernández has developed in decisive technical positions and starts in 1982, when he was elected, with 33 years, to perform duties as executive advisor to the cabinet of the secretary of state for relations with the courts and legislative coordination, with Felipe González as president. He remained in office for 11 years. In 1987 he joined the National Heritage Administration Council. This body included, among other things, the management of the Valley of the Fallen that in principle would be “temporary”, although almost four decades later the legal regulation that allows to separate Culegamuros is still pending.

In 1988 García Fernández added a new position as technical general secretary, and in 1992 he became a professor, and a year later he went to the Ministry of the Presidency, at the proposal of Alfredo Pérez Rubalcaba. In 2004 with the PSOE of José Luis Rodríguez Zapatero, he went to the Ministry of Housing, and in 2007 he was appointed deputy delegate of the Government in Madrid. Alfredo Pérez Rubalcaba, as Minister of the Interior, took him to the General Directorate of Recruitment and Military Education.