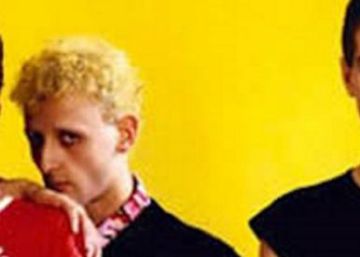 His name was not very popular, but it was key to the birth of one of the best Spanish pop bands. Javier Pérez Grueso, artistically known as Javier Furia, was one of the founders of Future radio. The musician has died today, as reported by sources close to the artist.

In a text published today in his Facebook account, Santiago Auserón, former member of Radio Futura, has lamented "the very bad news" of the death of Javier Pérez Grueso, "roommate for rehearsal, study, travel and tables for a while" . “I met him in a Madrid nightclub disguised as an Atomic Butterfly, dressed in meshes and silver cardboard wings, covered in glitter,” he added. For its part, Alaska has also lamented its loss and recognized the role of this "unofficial member of Kaka de Luxe", in reference to their close relationship. “Friend and accomplice in my adolescence. Goodbye Javier, happy trip to the stars ”, the singer wrote. Nacho Canut, Manolo Campoamor or Paco Clavel have also publicly shown their condolences.

An essential piece in the origin of the group, Furia was a painter when he met Enrique Sierra and, above all, also the painter and poet Herminio Molero. All three were the initial engine of the Radio Futura project, which came to light in 1979 with the incorporation of Luis and Santiago Auserón. Radio Futura was born when Herminio Molero, iconoclastic character who had appeared in 1978 at the MM nightclub in Madrid under the name of Molero Sound, decides to devote himself completely to music and opens his rehearsal room to anyone who wants to sign up. The incorporation of the rest of the members is crystallized in rehearsals in the summer of 79, with songs composed mainly by Molero, and a first performance in October 1979 at the Ateneo de Madrid. It was the trigger: Hispavox offered them a contract, Radio 3 opted for them and, after a series of scheduled performances, they became the opening act for Elvis Costello in Badalona.

Furia was only two years in the band, but it was enough time to be part of one of the most emblematic debuts of the move: Modern music, first Radio Futura album, published in 1980. With the reference of Roxy Music, to which the group wanted to resemble, but under all the influence of the new wave Anglo-Saxon, both British and American, Modern music It was a little jewel of carefree melodies and accurate choruses, with the most powerful single In love with youth fashion, one of the most emblematic songs of the group and, in the end, of the move, but also with notable themes such as Ivonne, Zombie or Little girl, the version they made of T-Rex. Furia contributed electronic percussion and shared the main voice with Santiago Auserón while all the compositions were signed by the group, although after Molero, the main composer, offered it on his own initiative.

Four decades later, the album is one of the best that has aged from the move, although the Auserón brothers deny it for the production dictated by Hispavox and the internal tensions that accompanied it. Because, with this work, Radio Futura, which embarked on a great tour of Spain, getting to play at the San Isidro festivities, opened the way to an unstoppable career as referents of the move, but also to the pandora's box in the group. The disagreements arrived, first, economic and, later, artistic. Dismissals that were never resolved and Furia was invited to leave in December 1980. He accepted, staying Santiago Auserón as the only singer, while Herminio Molero resisted leaving, although he ended up leaving the group he promoted in February 81. In this way, he would remain The formation popularly known by the Auserón brothers and Enrique Sierra, who died seven years ago, was established.

Furia, who did not stop having contact with figures of the Madrid movement, developed his career as a painter and appeared as an actor, without any resonance, in the films of Pedro Almodóvar Pepi, Luci, Bom and other Girls of the Mound Y Maze of passions.