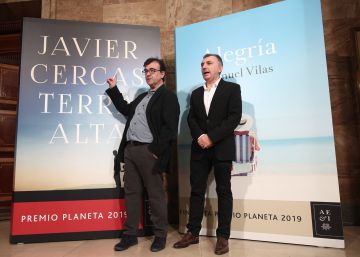 Frame the Planet award as an event not only literary, but social, is the stated objective of the main editorial group in Spanish. Just three weeks ago, last October 15, when they announced the winner and finalist of the 68th edition No doubt this goal was reached. The literary uproar caused by having awarded Javier Cercas as a winner and Manuel Vilas as a finalist, – two star authors of the rival group Penguin Random House Mondadori -, joined the disturbances by the sentence of you process that night altered public order in the streets of Barcelona. For more inri, the protagonist of Terra Alta, the winning novel, is a mosso d’esquadra, a police force that since that evening of the Planet award is in the eye of a political fictitious hurricane.

This noon, at the headquarters of Cervantes Institute of Madrid and on the eve of the new electoral elections, the police novel of Cercas and the finalist of Manuel Vilas were presented, Joy. The event also had some social thermometer, to bring books and fiction closer to what happens out there. In the auditorium, in the front row, was the acting Vice President of the Government, Carmen Calvo, who posed in the family photo and who from the stage the president of Planeta, José Creuheras, thanked that “in full campaign spend time at society's needs, because a society that reads is better. ” Maybe he meant group, but nobody corrected him. The journalist and writer Irene Lozano, current Secretary of State of Global Spain, the novelist Marta Rivera de la Cruz, Minister of Culture and Tourism of the Community of Madrid, and the poet Luis García Montero, director of the Cervantes Institute, completed the front politician. Actor José Sacristán, the writer and winner of the Planet in 2011, Javier Moro, singer Rosa Léon and journalist Nativel Preciado also appeared at the event.

Creuheras said that to date, and waiting to see the commercial results of the launch of the new novels that, with a total circulation of 300,000 copies, arrived yesterday at the bookstores, of the set of prizes awarded since 1952 have been sold 44 Millions of copies. He emphasized that this award is lived as "a party" that started, he said, last August when he read the winning work. When he finished it, he added, he went on to The Miserables by Victor Hugo, a crucial reference that changes the life of the protagonist of Javier Cercas' book. "Good books change our way of seeing the world and can save lives," said the author in response to a question from the journalist Cristina Villanueva, moderator of the act. "Maybe we wanted to be postmodern at some point, but literature is useful, and to be, it must not be proposed, because if it does not become propaganda." Manuel Vilas, – the other part of a "marriage so well agreed that it is boring because we agree on everything" -, he added that he is still alive thanks to literature, "not as a writer but as a reader."

Winner and finalist reflected with frank camaraderie on how they feel after receiving the award (the best economically gifted in Spanish, 601,000 euros for the winner and 150,250 for the finalist). Cercas, as a friend warned him, is "almost like a Miss Spain"; while Vilas is shown in total redundancy with the title of his novel, Joy. They also talked about the similarities between their books, in principle two very different bets. “All the novels are autobiographical. The protagonist this time seems to have very little to do with me, but there I have put the most important thing I have to say, ”confessed the author of Soldiers of Salamis. Vilas told how the narrator of his new book, the same self-made voice of the successful Ordesa, it is refounded in each hotel that it visits escaping its identity, and how it tried to honor Cervantes by including the comments, amendments and corrections that this wandering writer receives for his previous book.

Where would he be today mosso Melchor of Terra Alta? Villanuevas asked Cercas. And the writer decided to drain the bulk of reality and return to his fictional territory: “The main action of the novel is in 2021 and nobody talks about you process or of the crisis, as if the Holy Spirit had appeared, or someone had won the elections and had solved. Two years to solve it. ”

The Gofiones present in Santa Ana «Mixtura», a journey through the music of a lifetime