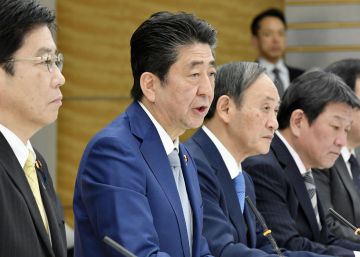 The poor performance of Japan in the last three months of 2019, in which the third largest world economy fell by 6.3% annually and 1.6% quarterly – its worst figure in almost five years and a fall that almost doubles expected – about the Asian giant back to the abyss of recession. Since the outbreak of coronavirus began in early December and the global alert did not break out until the beginning of January, the epidemic started in Wuhan (China) barely had an impact on the data made public on Monday by the Japanese authorities: will be invoiced in the first quarter of the current year.

All components of Japanese GDP except public spending and the external balance – which improved 0.5%, although on the less positive side: exports remained and imports fell – contracted in the final tranche of 2019. Consumption private sector sank 1.6% compared to the previous quarter (double digit if measured in year-on-year terms: 11%), largely due to the increase in VAT decreed to finance health and pensions and for a warmer winter of what was planned, which reduced textile sales. Non-residential private investment fell 3.7% quarter-on-quarter and residential, 2.7%.

The Japanese economy has been installed in the stalemate for years – not for nothing the term japanization It is used to refer to a country or block that fails to take off – but has not declined since the third quarter of 2018.

Both the Abe Administration and the Bank of Japan expected a lower impact of the VAT increase than in 2014, when GDP plummeted 7% year-on-year in a single quarter. That was the last time that the Japanese economy registered a comparable data, negatively, with the public event on Monday. This time, however, the rise in tax pressure had been lower, food had been excluded and the Government had arranged a series of countermeasures to soften a potential collapse in demand that, however, has occurred.

“There is a great possibility that the economy will suffer another contraction between January and March. The virus will mainly affect tourist arrivals and exports, but it could also weigh heavily on domestic consumption,” says Taro Saito, an analyst at the NLI Institute, in statements to Reuters. “If this epidemic is not contained by the time the Tokyo Olympics are held, the damage to the economy will be enormous.” With more than 400 cases diagnosed and one dead, Japan is the second country most affected by the outbreak, behind China, where it originated. But, beyond both countries, the coronavirus has also taken a toll on prospects in other key economies for the Asian continent: Singapore, for example, has just reduced its growth projections by 2020 and Thailand has lowered its expectations to the most Low in five years.

“We will continue to pay careful attention to the effect of the virus on tourism and the economy as a whole,” said Japanese Economy Minister Yasutoshi Nishimura in a statement. “Depending on the level of emergency, we will take the necessary steps and respond completely.”

Fear for what may be to come in the coming months and the bad data recorded in Japan between October and December last year have also raised speculation about the possibility that the Shinzo Abe Executive can expand the stimulus package after the one approved in the final section of last year: 110,000 million euros, largely to soften the effect of the VAT increase approved in October. “Given the risks, the Executive will face increasing pressure to increase the fiscal stimuli that are already underway. A sharp drop in GDP [en los primeros compases de 2020] it won’t be easy either [de digerir] for the Bank of Japan, “adds economist Yuki Masujima in conversation with Bloomberg.

However, this plan to relaunch the economy should begin to take effect throughout the current year. “I am preparing for another contraction in the first quarter. There are simply not enough positive factors to build an optimistic forecast,” says Mari Iwashita of Daiwa Securities, who believes the government will widen the expected stimuli when a new fall comes to light. of the economy between January and March. The market believes it is a matter of time.