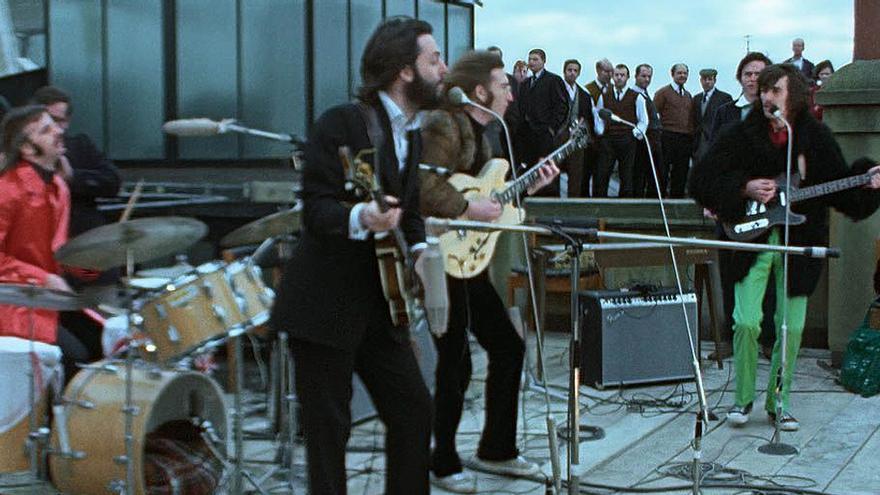 When the Beatles entered Twickenham Film Studios on September 4, 1968 to record promotional videos for ‘Hey Jude’ and ‘Revolution’ directed by director Michael Lindsay-Hogg, they were already a highly unstable group, besieged by the chaotic march of their businesses and eaten away by internal discrepancies. The tactic used to sidestep those problems during the recent making of the so-called ‘White Album’ (giving up working as a unit and encouraging individual efforts) had resulted in an estimable double LP, but it didn’t seem to go long. The high experienced during the filming of the video for ‘Hey Jude’ in front of 300 viewers (the closest thing to a performance with an audience they had done in more than two years) led to Paul MCCARTNEY, turned de facto into the musical director of the band before the absence of his companions, to fantasize with the idea that a return to the stage would open up new horizons for them and help to rebuild the group’s cohesion. The project, supported in principle by the volatile John Lennon, ended up leaking after colliding with an iceberg called reality, but all that process left as a legacy more than 50 hours of filming which, as Peter Jackson’s docuseries ‘Get back’ reveals, contain many stories beyond the official chronicle of a glorious shipwreck.

McCartney’s plan to overcome strong opposition from George Harrison (the ‘beatle’ most averse to any proposal that somehow smelled of ‘Beatlemania’) consisted of giving a unique concert that his own company, Apple Corps, would film and market all over the world accompanied by a documentary focused on rehearsals, in which the band would work on a repertoire of 14 new songs. The original purpose was to locate the concert in the Roundhouse club in London, but the idea was soon discarded in favor of alternative scenarios to which more crazy (a Roman amphitheater in the Libyan city of Sabratha, the deck of a cruise ship in the middle of the ocean … ), with which the possibility of playing live again grew farther and farther to McCartney’s dismay, who, at this point, seemed the only one truly interested in taking the project to some port, even if it was not necessarily a good one.

“See you in the clubs”

Thus, in the first days of January 1969 the Beatles met in the Twickenham studios. rehearsing for a concert that most likely was never going to be held. And all this, before the cameras and microphones of the Lindsay-Hogg film crew. Harrison’s defection (with his unbeatable farewell phrase: “See you at the clubs”) raised the internal crisis situation to a DEFCON 2 phase and forced the group to reconsider the whole thingThe plan to make a documentary was kept, but the Beatles gave up the gig and, after transferring operations to Apple’s studio at No. 3 Savile Row, they focused on recording songs for a new LP.

The Beatles (and Yoko Ono, with their backs turned), at one point in the docuseries ‘Get Back’.

The Beatles (and Yoko Ono, with their backs turned), at one point in the docuseries ‘Get back’.

For decades, the ‘Let it be’ project (the Lindsay-Hogg film and record, which ended up being produced and mixed by a Phil Spector in very low hours) has been perceived as a depressing portrait of decomposition. But both Peter Jackson’s docuseries and the recently published book with the transcripts of the most relevant conversations that took place in those sessions (‘Get Back. The Beatles’, published in Spanish by Libros Cúpula) offer us a somewhat different and much richer perspective. They tell us, for example, that in the month that elapsed between the first day of shooting at Twickenham and the concert on the roof of the Apple building, the Beatles went from youth to manhood. “Since Mr. Epstein died it has not been the same again,” says Harrison at one point, alluding to the disappearance of the band’s manager in August 1967. And McCartney responds: “Now there is no one to say: ‘Do this’. […] Now we are the ones who have to get up at 8. That is what growing up is all about. ”

In January 1969, the Beatles grew up, and they did so in full view of the world: they brought their differences to the table in a surprisingly honest and articulate way, became aware of their mortality as a group, assumed that collective projects require resignations and commitments and they learned to enjoy each other’s company in a new way. As the lines Lennon contributed to McCartney’s song ‘I’ve got a feeling’ say: everyone had a rough year and everyone had a good time.