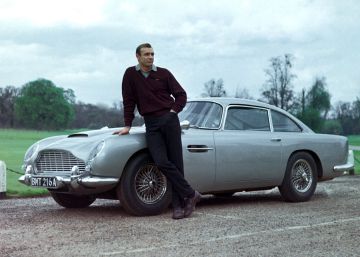 Aston Martin, the most mythical car of the many that James Bond drove, has had to pay a heavy toll to continue driving on the select highway of luxury vehicle manufacturers. Specifically, an interest of 12% to be able to place a bond issue for 150 million dollars (137 million euros) that alleviates its pressing lack of liquidity. The profitability demanded by investors for the British firm could place its debt the interest rate of the company's previous issues doubles, (although the coupon will be paid half in cash and the rest will be added to the principal of the debt). The company believes that this money will be enough to face the launch of the expected DBX, the firm's first SUV model, with which Aston Martin He hopes to lift his head.

It is expected that the presentation of the DBX will be in December and that it can be released in the spring of next year. Aston Martin Lagonda Holding (AML), which groups the two brands of vehicles of the firm, is guaranteed the issuance of another 100 million dollars under the same conditions, but should raise interest to 15% if it does not get at least 1,400 firm orders in nine months

The market continues to doubt the viability which is now the only independent manufacturer of luxury cars. And experts like David Bailey, from the University of Birmingham, consider it almost inevitable that the firm – which has already broken seven times throughout its hectic history – ends up being absorbed by some car giant. Bailey points to Daimler-Benz, which already owns 5% of the capital and supplies the engines, transmission and electrical system of the new Aston Martin DBX, as one of the most likely candidates.

Nothing illustrates better the earthquake that shakes Aston Martin than the evolution of the price of its shares since a year ago was released on the stock market. On October 1, 2018, the titles debuted on the floor with an appraisal of 1,900 pence. On October 11, however, they were trading at 406 pence. That is, the shares have lost 78% of their value since their placement in the market.

In case this punishment was no longer painful, many analysts believe that the action has not yet hit bottom. Sanjay Jha, of Panmure Gordon, estimates that Aston Martin's titles may fall to the level of 288 pence. Jha, who is part of the 14 independent analysts that cover the company, believes that the firm will end up being forced to sell the new DBX at a discount in order to reach 1,400 orders that condition the second tranche of the debt issuance, as it recognized to Bloomberg.

The rating agencies seem to share that pessimistic view. Moody’s changed AML’s debt outlook to “negative” on September 26. A day earlier, Standard & Poors had lowered its credit rating from B- to CCC +, with a negative outlook. "This vision reflects the continued pressure on profitability, a large cash burn and a very high leverage due to the high risk of problems associated with a possible Brexit without agreement and new rates on vehicles exported to the United States," they explained in the rating agency “In addition, AML is about to launch its new DBX luxury SUV, whose success is essential for its ambitious growth and solvency strategy to continue,” added the S&P note.

The experts of the rating agency emphasize that Brexit is a greater risk than possible US rates, because the latter would affect all luxury manufacturers equally, since none of them have factories in the United States, while Brexit penalizes more to Aston Martin because its production is centered in the United Kingdom and depends on a large percentage of components from the continent. In addition, they stress that the level of debt that AML can assume “has reached a ceiling” and will reach 1,230 million pounds (almost 1,400 million euros) at the end of this fiscal year, compared to 900 million last year.

One of Aston Martin's problems is that its two main shareholders, the Italian Investment Fund Investindustrial (30.9%) and a conglomerate of Kuwaiti investors (36.05%), seem more interested in recovering their investment than in the future of the company. When Aston Martin went public a year ago, it was valued at around 5,000 million euros, "but the money did not go to the company, the money went to the investors, who wanted to recover their investment, and there was no money destined to reinvestments" Bailey explains.

The current majority shareholders entered 2007, when Aston Martin suffered a serious crisis. “They were industrial investors specialized in improving the performance of companies to sell them. And that is what they have tried to do. I think they never intended it to be a very long-term investment, ”explains Bailey.

“They have problems for many, many years. They are increasingly dependent on Mercedes Benz technology. I have a hard time seeing how they can continue to survive as an independent producer. I think in the end they are going to be absorbed by another big car company. Aston Martin is a very cool brand in the automobile industry and it is perfectly imaginable that someone like the Daimler-Benz group wants to keep the brand and make it a success by combining their technology and sharing the costs of new developments, ”he predicts.

“I would also like to say that Andy Palmer, the CEO, has to be receiving a lot of pressure to leave, especially after the problem of the stock collapsing over the last year. I'm surprised he is still in office, ”concludes David Bailey.