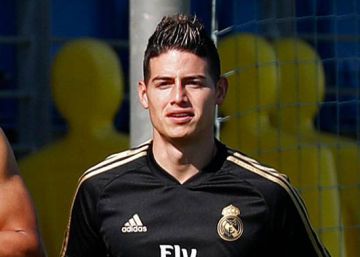 Without resolving Bale's exit – and still not knowing if that will happen, when and how – Zidane met on Monday in Valdebebas with another player clearly unwanted by him: James Rodriguez. The last time faces were seen on a soccer field was June 3, 2017, in the Cardiff Champions League final. Actually, they saw little because the Colombian watched the game from the stands dressed in suit after being one of the discarded by the French coach. The disagreement then, after a year and a half of coexistence, was absolute and caused his departure from the Bernabéu through a two seasons transfer to Bayern Munich. The German entity had a purchase option worth 42 million that it has not exercised.

At 8.25, James's car crossed the door of the Sports City again with its future in the air. Nothing has changed in Zidane's plans. The Colombian continues to appear in the column of expendable footballers, but right now his departure is a mystery. Club sources say that if a convincing offer arrives, they will value it, and clarify that if the technician does not want it in any way, the solution will not be to leave it in the stands.

It is intended by Naples by Carlo Ancelotti, the coach with whom he has performed more and better, and Atlético; but nevertheless, the serious injury of Asensio and the reluctance of Florentino Pérez to sell it to his neighbor in the city, especially after the transfer of Marcos Llorente, ties him to Valdebebas for the time being. This Monday was the day set for the return of the players who participated in the Copa América, and that has been done with Casemiro and one of the new, Militao. 787 days ago the Colombian did not wear a Madrid shirt.

Zidane and James's relationship is the story of a disenchantment. Perhaps, now without remedy. At first there was admiration and trust, but it soon began to break down. "James and Isco must be given affection because they are very good," said the coach as soon as he premiered on the bench in the Bernabéu. The two players came from not understanding each other very well with Rafa Benítez, the head of the squad in the first part of the 2015/16 season. The idyll, however, was ephemeral. A few weeks after those statements, he was disappearing from the plans of the French coach.

From that moment on, the distance between them only widened. He stayed one more year, 2016/17, the double of the League and Champions, although its relative weight did not stop falling. He was part of that so-called "Madrid B", along with Asensio or Morata, who played so well and praised so much for the breadth of staff exhibited by Madrid, however, his mark on important games was very low. From the eighth of the Champions League to the final, he hardly played 83 minutes. He was so displaced that a few days after winning the 2016 Club World Cup, it clouded the celebration by recognizing to journalists that he was open to a march in that winter market. He did not consume his threat, but neither did he change his status.

Despite his downward trajectory, James always managed to invoice some considerable numbers. In that 2016/17, he scored 11 goals and gave 13 assists, and in 2015/16, he scored eight goals and added 10 goal passes. The best figures he left in his debut year (2014/15), in the heat of a great World Cup in Brazil that boosted his arrival at the Bernabéu with 23 years and after having paid 80 million euros to him to Monaco. Under the mantle of Carlo Ancelotti, the Colombian left-hander produced 17 goals and 18 assists in the 46 games he played (44 starts). That was the best James seen in Europe.

Due to his divorce with Zidane, he sought in the summer of 2017 at Bayern the protection of Ancelotti, who expressly requested it. But in Bavaria it did not take root either. Now he returns to the starting box, to another Madrid of Zidane, although with a past in tow. For him and for the coach. The two left and the two have returned.