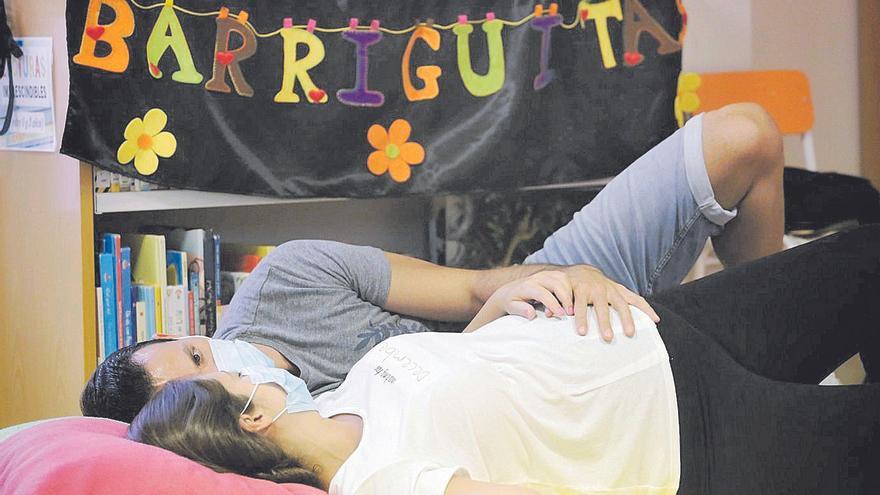 The José Saramago Library offers the Barriguitas program, a pilot project that has been the flagship of Mon Peraza in Europe for three and a half years. It consists of three sessions and pursues prenatal stimulation. And why does the activity take place in a library? Because its main axis is the story, the string, poetry and oral tradition. With the complicity of the couples formed by Rocío and Fran and Shaina and Juan Alberto, we attended the meeting.

Mon Peraza is always indebted to the Municipal Library of Arrecife, which three and a half years ago allowed him to start the Barriguitas project, after the doors were closed in another center … Of course, a priori, a project of These characteristics are associated more with the birth preparation courses of a health center than with a municipal library. However, it is the first contact with culture for the baby, from the story, the string, poetry and oral tradition, thanks to this prenatal stimulation workshop that, in three days, develops tactile, motor and sensory techniques.

The 42-year-old monitor defines herself as self-taught, although she highlights the influence of the Institut Marqués de Barcelona, ​​which has supervised her in this process. With a degree in Exact Sciences from the University of La Laguna, Mon decided to dedicate herself to cultural management until one day she discovered that she preferred to create culture rather than manage. In this way, she developed the Barriguitas project, which had her children – who are now 16 and 14 years old – her own particular school, to later share this practice with the new parents.

The objective: to strengthen the emotional bond from before birth and contribute to the development of the baby, from the knowledge of the modulation of the voice. Another challenge: that the couple sit down and enjoy the little one through the games. It brings to mind the first book on the subject, published in 1981, The Secret Life of the Child Before Birth, by the American Thomas Verny.

Yesterday was the second of the three Barriguitas program workshops. The appointment was attended by Rocío Villadeamigo and Francisco Martín, 37 weeks pregnant; She, of Sevillian origin, staff of the Hospital Universitario Nuestra Señora de La Candelaria, a privileged witness of this time who will tell her little one’s grandchildren … Shaina Danani, and Juan Alberto Rodríguez, with 38 weeks of experience, also participate in the workshop. gestation. Yesterday Jésica was absent because she went to the routine control. The two couples met and enrolled in this workshop with the recommendation of Rocío’s friend, who had already given birth and, having overcome the disbelief after giving birth, she called her and recommended it because “it works”, laughs Rocío.

The workshop starts and, as in real life, it is the turn of the presentations. Mon remembers the names of the fathers and mothers … and also introduces the babies. Jaime, Rocío and Fran’s child; although Shaina and Juan Alberto prefer to wait to see his face to define the name.

“We go with bimodal language to communicate with the baby,” Mon invites them, to refer to the adaptation of sign language to the activity. Thus, there is a definite gesture to refer to dad, mom, boob and pain. Thus they review the content of the previous day, but gestures will be key.

In one of the rooms, there are mats on which each couple is invited to sit. And the workshop starts with a song in the shape of a lullaby that serves, in this case, as a greeting to the baby: “Hi, I’m mom, I’m fine, I wish you were too.” Then it’s the father’s turn. All singing, in a therapy to remove shame.

From there, Mon uses the album books for the workshop. He puts music to the song and, with the couples standing up, encourages them to accompany the lyrics with the signs while they sing. The key words, which accompany with a gesture: moon, tit, mother, Moon … and they sing: “You will have a little room for Luna because your father went to look for you” …

Bimodal language is the red carpet to break prejudices and indulge in intimacy between mommy, daddy and baby. Relaxation, connection, relaxation is essential to generate the hormone of happiness, Mon warns.

Onomatopoeia is introduced, the game with sounds that parents indulge in with the complicity that they know that their baby plays with them when they imitate the sounds of a cat, horse, duck, cricket, dog, nightingale … protagonists of the two stories in which parents end up playing as children as if it were the same I see, I see. And the most difficult still arrives. With the couples already on the mats, Mon instructs them in visual stimulation, for now and when the little one arrives. “Living is moving you,” says the monitor who invites them to surrender with the intensity that “perhaps it is your only pregnancy”, making the father and mother an accomplice alike.

Another story with bears, pigs, dogs, rabbits, chickens, frogs … that are going to get a cake and that allows you to do a little gymnastics to work the pelvic floor before entering the last exercise, where the mothers are in the mats while their partners enjoy the moment of intimacy of the baby from the contact with the belly in a nothing that sings: “The first time you were born was the second time I was born.” Next Thursday, third lesson, with painting will include to be intimate with the baby.

The incidence stagnates at 92 cases and Health notifies 4,040 new infections

The Canary Islands already have the fourth highest incidence of Covid in Spain, dragged by Tenerife