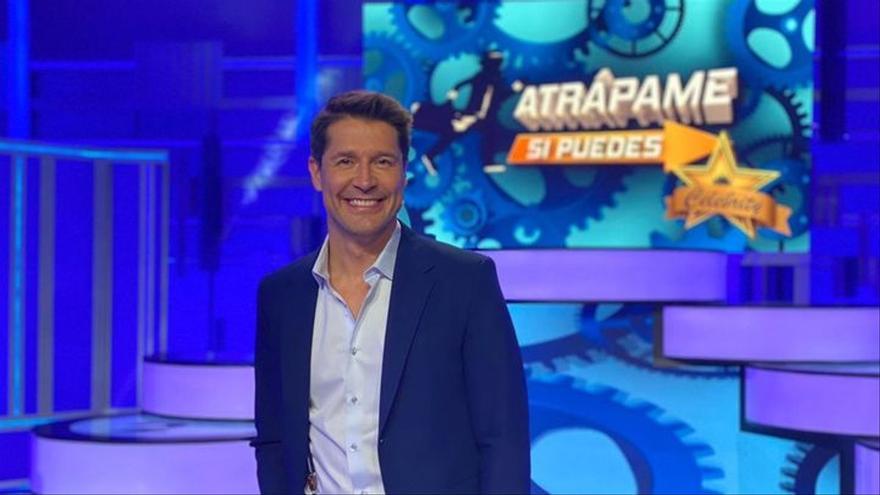 Jaime Cantizano returns to television with his own program. The Andalusian leads ‘Catch me if you can Celebrity’, which kicks off tonight in Telemadrid. The daily version of the contest has made a hole in the regional ones, where each version breathe “your identity”, as stated by the presenter, who combines this new project with the conduction of his space on weekends in Onda Cero,

‘It’s finally not Monday.’ What do the ‘celebrity’ versions have that so many are being made?

Fundamentally, it is entertainment and I think people are demanding it. A familiar face is always a claim, and especially a loved face. In addition, with the question and answer element it is an opportunity to learn, but also to sing and dance like the contestants of this program do. Because they practically do everything.

Yes, of course. There is a component of curiosity, to see them at the limit, and even to commit the odd blunder. But we also like to see them sing, dance, scatter … And that happens. Both can happen. They actually occur in this first show. I won’t tell you who fucks up the most, but everyone first has a very strong competitive spirit.

It is a contest that in all its different versions in each autonomous community works very well.

It works very well on all regional channels. On Aragon They have been going on for more than five years and the daily strip is above 15% of the screen share. There is the Catalan edition, the Valencian, the Andalusian, the Galician … What happens is that it is true that each one has their own identity, their personality. They have been able to do that very well, Globomedia has been working on this for a long time. One of the things that has given me the most peace of mind is getting to a team that was very busy. Last Wednesday, when I arrived to see the set and camera shots, I introduced myself. I said, “hi, I’m the new one.” Because really the only new one on that show was me. The rest have been doing the daily strip for some time.

Yes. What happens is that you already know how television works … I am satisfied because the truth is that it is a very good product, of quality, for all audiences, it is an entertainment program, with questions and answers, but also with a show component.

How is it being to combine the recording of the program with your program on Onda Cero, ‘Finally it’s not Monday’? Does it hurt a lot not to have weekends?

Do you know what happens? And I really mean it. I feel very lucky. There are harder weeks of work, but I have to say it with my small mouth, because with the one that is falling out … I can choose projects, I am doing what I want and that is that I have to feel lucky. In recent years one of the conditions that I set was to have time for myself and it is found, although there are weeks that it is more difficult.

As if that were not enough, you collaborate in ‘Espejo Público’.

Yes, it’s been two seasons since I wanted to land and say ‘It’s finally not Monday’. I think it was time to do it.

And what balance do you make in front of the program?

I was very clear about the tone that I should give it, which is the tone for the weekend. Get away from the daily tension and it is a program that is established and is recognizable by the radio listener. It is giving me many joys. For years I was very clear about the professional path and it is the path of maturity as a communicator. I think I have not been wrong, that things have turned out well for me.

It seems that the weekend programs have a more relaxed tone.

Yes. Last Saturday I had a 20 minute conversation, what do you think and say: today on the radio and on television what slow conversation can you have? Well, yes, I had it with Ángel Martín talking about that stage in which he lost his head and the weekend radio makes you savor the interviews and the contents in a different way.

Going back to TV, one of your last jobs as a presenter was’ Target Eurovision‘in 2017. How about your experience with the Festival’s preselection?

(Laughs) I have to tell you that it was one of the most tense moments I’ve ever experienced, because I didn’t really understand what was happening. [el público abucheó al ganador Manel Navarro y al jurado]. It was my responsibility to stay calm and make the shortlist flow. The surprising thing about that live was the volcanic nature of social networks. And there I did realize how important for many people this Eurovision and what it moves. It is a very important movement here in Spain, but also in Europe.

Now it seems that TVE wants to work it out …

Yes, to please the eurofans, who are a power (laughs). What is done today has nothing to do with what was done ten years ago. And what was done ten years ago cannot be done now at this time, because you cannot even talk about that genre. It’s more like a permanent reality show. Actually, the pure information of this genre has ceased to exist, it is information that goes in parallel to what happens in some television programs and in a network.