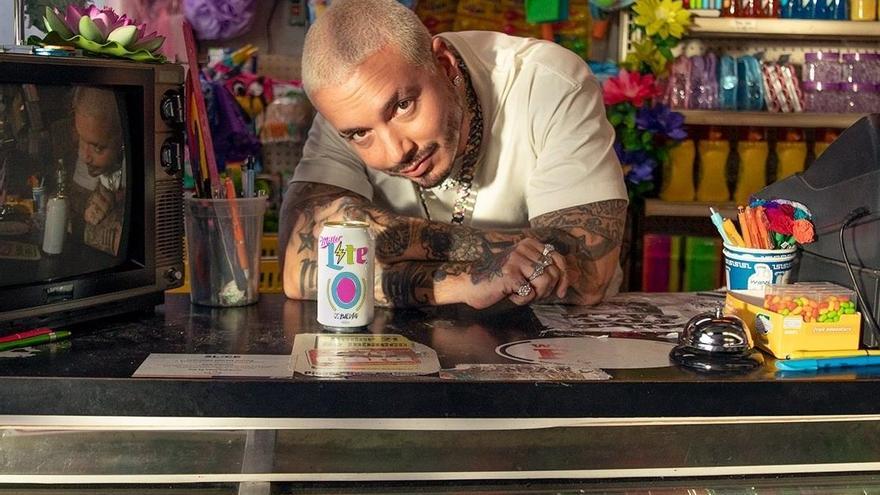 New York, Aug 10 (EFE) .- J Balvin is a world reggaeton star, but for one day in New York he simply introduced himself as José, a “normal man” in charge of the counter of a neighborhood store, surprising customers as part of an advertising campaign and at the same time offering clues about his next musical project.

The Colombian singer, named José Álvaro Osorio Balvin, presented the people who entered with limited edition Miller Lite beer cans with its distinctive lightning bolt and neon aesthetic, the result of a collaboration called “Es Jose Time” with which he wants to show “the facet of the human being” after J Balvin, as he told Efe in a telephone conversation.

The Grammy award winner chatted, took photos and shared drinks with unsuspecting shoppers who entered the typical New York winery and got to know what it is like when he is off stage: a man who values ​​”more than anything else spending time with his family and close friends. ”

And it is that José “is a normal man, with joys and tests,” said the renowned artist, who opened a window to his life and mental health in the documentary “The Boy From Medellin” a few months ago and now takes the opportunity to give some brushstrokes on what occupies his days, while keeping his rumored recent paternity private.

“I like to walk, ride a bike, watch a movie, dance with my friends, read a good book, have a quiet coffee, a good Miller Lite. I try to be a better person every day, obviously with my flaws and virtues”, explained the 36-year-old vocalist.

“I’m learning a little about everything,” he added, from trying skydiving to enjoying things as simple as a walk. “I am so focused on J Balvin that sometimes we forget what José needs,” he said.

After a year and a half missing the stage “a lot”, J Balvin has ahead of him a batch of festivals that began this weekend with the Latino Mix Live in Houston, will go through the Governors Ball in New York in September and will continue until October with the Outside Lands Music & Arts Festival in San Francisco, among others.

“I am more of a fan of going to see people than people of going to see me,” he joked, convinced that performing in front of a large audience is “something that is not forgotten” and is “automatic”, like “driving the car “, and highlighting the feeling when you” immediately connect “with the audience.

The singer applauded that “as for reggaeton, everything is super strong” and acknowledged that he enjoys the success of his latest viral songs, including two collaborations with Skepta and Skrillex, whom he described as “legends”: “They are very ‘cool’ , we must continue to elevate and reinvent ourselves every day. ”

In this sense, after launching the single “Ma G” at the beginning of the year, with a video recorded in the neighborhood of Castilla (Medellín) where he grew up in anticipation of a very personal upcoming work, J Balvin promised: “It’s time to José. It’s time to release the album soon and give people more joy, more music, inspiration … “.

Balvin also highlighted that his collaboration with Miller, a “culturally symbolic” beer, has a charitable component as it will support “wineries, shops and other similar businesses owned by Latino owners” in the US with a donation of $ 50,000 to the Accion Opportunity Fund. .

“There are many things we can do to support Latino culture: each one of us, support each other. With this campaign we want to financially help Hispanic family businesses,” explained the singer, who has been vocal on many occasions in your support for this community.