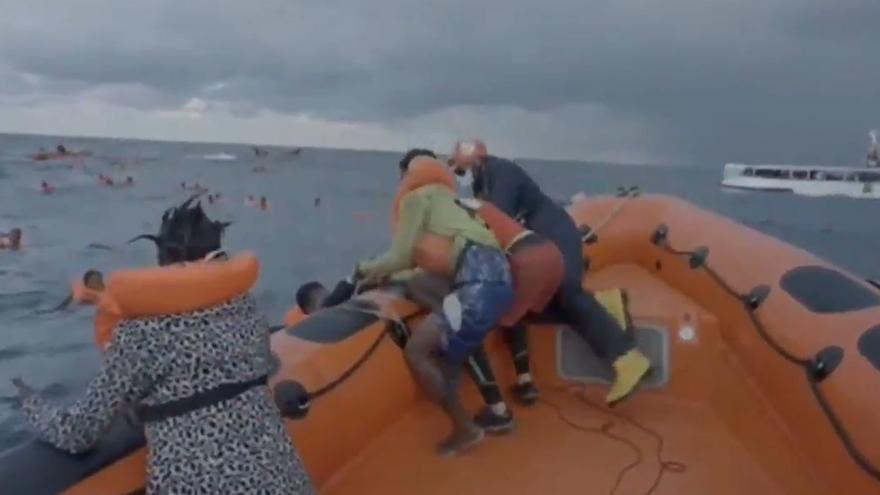 “Look for my baby, I have lost my baby,” the mother of a six-month-old boy cries desperately, while lifeguards from the NGO Open Arms try to rescue a hundred people who call for help in the water after they sink the base of the boat in which they traveled in their attempt to reach the Italian coast. The organization has published the harsh images of its rescue operation in the last documented shipwreck in the central Mediterranean, in which at least six people have died and a hundred have survived.

Among the deceased is Joseph, a six-month-old baby who was rescued by the NGO in respiratory arrest. The boy had been resuscitated by the doctors on board and was awaiting urgent evacuation with other people also in serious condition from the shipwreck, but eventually passed away. “He went back, but hours later his little body did not resist,” reported from Open Arms. “It has not resisted until its urgent evacuation, which is activated and underway to evacuate the most serious cases. How much anger and pain,” they declared from the organization.

As detailed from Open Arms, his team had located the barge, after many hours of searching. As he approached the boat, he handed out vests and masks, but shortly thereafter, the floor of the boat gave way and all its occupants fell into the water. The unstable boat in which they were traveling had been adrift since Tuesday. After hours of searching, a plane from the European Union’s Frontex operation told Open Arms the location and the ship headed there. “This is what happens when people are left abandoned for days at sea,” they denounce from the NGO.

This is the second shipwreck in the last twenty-four hours, after thirteen people died this Tuesday, including three women and a minor, when the boat in which a group of migrants tried to cross the Mediterranean to flee the war in Libya was shipwrecked. and reach the shores of Europe, according to the International Organization for Migration. This Tuesday, Open Arms also saved 88 people from a very damaged boat, with a large amount of gasoline spilled inside and into which water entered, so it now sails with 199 migrants on board.

So far this year, 575 people have died trying to reach Italy or Malta via the Central Mediterranean. The lack of legal and safe ways to access Europe pushes them to risk their lives at sea, after passing through Libya, where migrants are often victims of abuse, torture and extortion. The European Union does not have a rescue mission in the Mediterranean, a request repeated by human rights organizations for years. Italy, with the community approval, two years ago coordinated rescue efforts in international waters between Libya and Italy to the Libyan authorities, despite their lower rescue capacity, the allegations of human rights violations that weigh about their coast guards and the abuses migrants often encounter upon their return to the country.