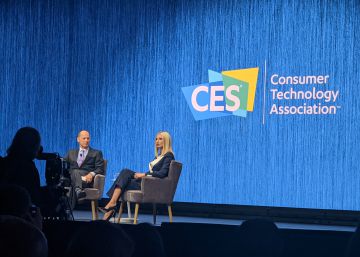 Two hours before Ivanka Trump’s presentation began this Tuesday at the CESDozens of people lined up to take place in a large room at the Venetian hotel in Las Vegas. The daughter and advisor of Donald Trump, president of the United States, has attended the largest consumer technology fair in the world to talk about the future of work. Their participation has caused expectations and controversy in equal parts.

After announcing that Trump would participate in the fair, different experts from the technology industry criticized the decision. The majority claimed that there were women with more experience in the sector and more qualified for it. “This is a terrible choice on many levels, but also an insult to the years of protests by the few women who have been invited to the keynote and to which it was said that it was a basic problem while men in a similar situation were promoted, ” tweeted the tech commentator Rachel Sklar

Technology analyst Carolina Milanesi expressed disagreement in a column published on December 31 in Forbes: “The reason for my disgust is based on the fact that there are many more women who are dedicated to technology and are entrepreneurs who could go around Trump on how technology will impact the future of work.”

Along the same lines, many other women and businesswomen such as Sara Mauskopf, executive director of the child care company, were positioned Winnie: “There are many women who are working hard to help women in technology and create products that help women and also children and families. Ivanka Trump is not one of them. “

Before the flood of criticism, the CTA (the association of technology companies in the US, which organizes the CES) defended its decision. The fair’s director, Gary Shapiro, argued in an interview with the BBC that Trump’s presence at the fair would serve to explain the collaboration between industry and the Government. “A lot of attention is paid to the work of the future, and the keynote with Ivanka Trump, he will focus on how the industry is working with the Government on this very important issue, “he said, in addition to highlighting that Trump has done a great job. At 38, the daughter of the US president has appeared in different events with executives like Tim Cook, from Apple, or Sundar Pichai, from Alphabet.

Finally, this Tuesday, Gary Shapiro has interviewed Trump before hundreds of attendees. The consultant, who has focused much of her speech on the employment situation in the United States, said that in the digital age “a technical literacy” of workers is required. “It’s not just about offering training for the jobs of the future. Companies must invest in training their current workforce so that these people can continue to perform their work tomorrow even if they use different equipment, “he explained.

The university, as he stressed, is not the most suitable path for all young people: companies should focus more on the skills when hiring and less on the titles. Trump, who has announced a new collaboration between the US government and the technology industry to create jobs, has addressed the importance of digitalization to expedite different procedures: “We need to leverage technology and data to have information [de las personas] on your iPhone Why can’t you have your high school degree on your iPhone and verify it so that the person who is going to hire you doesn’t have to call to verify it? “

As for the US immigration system, he has stated that it must be reviewed. As he explained, the president of the country believes that “it is crazy to educate immigrants from all over the world and when they are about to start their business, throw them out of the country.” “Our immigration system is totally defective. If we compare it with that of our northern neighbor, Canada, it makes no sense. We need to recruit and retain the best talent in the world, “he concluded.

The mystery of Pável Dúrov, the creator of Telegram

This is the most popular greeting of youtubers