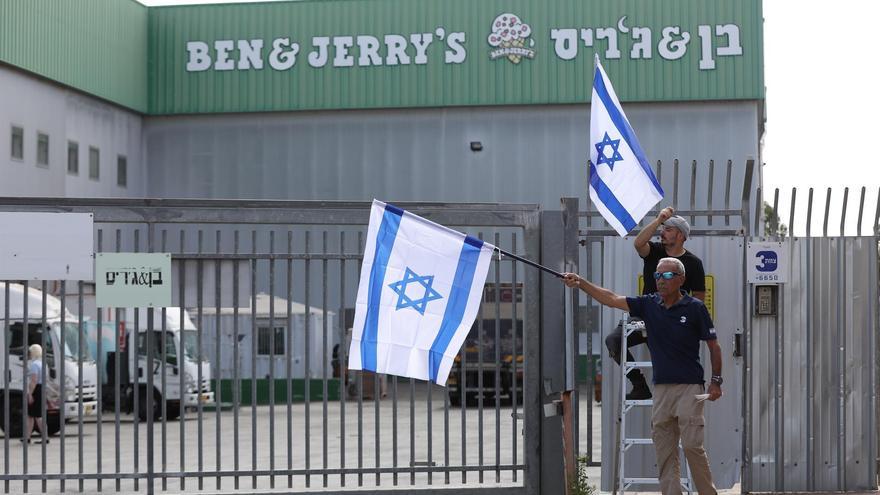 There are blue skies and green lawns both inside and outside Pizzeria Efrat, a restaurant in the settlement of the same name within the occupied territory of West bank.

Outside, lush parks and wide, quiet roads surround the property. Inside, the famous cows of Ben & Jerry’s ice cream tubs greet customers from no less than three refrigerators with the company’s logo. Inside the refrigerators, there are stacks of red pizza boxes.

This Monday, Ben & Jerry’s announced that stop providing ice cream to Israeli settlements in occupied Palestinian territories, saying that doing business there was “incompatible with our values.” This decision is one of the highest-profile demonstrations of rejection among those made by well-known companies that oppose Israeli settlements, located in territories occupied after the 1967 war and considered illegal under international law.

The boycott has dominated the news agenda in Israel this week, during which it has received much greater coverage than the Pegasus project revelations.

Israel’s President Isaac Herzog has called the ice cream company’s decision “a new form of terrorism,” while Prime Minister Naftali Bennett has warned the chief executive of Unilever, Ben’s parent company. & Jerry’s, that there would be “serious consequences” for this “anti Israel” move. In the media and in political circles, many denounce that the company is anti-Semitic.

But in the wealthy settlement of Efrat, south of Bethlehem – a seat of American culture transplanted into the middle of the Holy Land – no one seems to bother too much.

“It’s a pro-Palestinian move, an anti-Israel move,” says Renay Hersh, 63, of Los Angeles, outside a supermarket next to the pizzeria. “Why should we give up on that? It’s just ice cream. ”

Co-founded by a New York Orthodox rabbi in 1983, Efrat’s population has grown to 10,000, many of them English-speaking from the United States, or with families there.

Homes here are expensive, reflecting the high demand from commuters to Jerusalem seeking a suburban lifestyle on land that previously belonged to four Palestinian towns. Across the valley, Palestinian gardens and orchards, with no connection to the Israeli water supply, are brown and dry from the summer heat.

“My father came from New York and bought Ben & Jerry’s for Gush Etzion [un conglomerado de asentamientos, entre ellos Efrat] 30 years ago, ”says Asher Goodman, 29, who took over the restaurant after his father died four years ago. “It is one of our successes, it is part of the American style of the pizzeria.”

“Israelis love Ben & Jerry’s. It is a national problem that is not just about Judea and Samaria [el término israelí para Cisjordania]… We will continue to sell it ”.

The settlement movement has used religion, history and security as justification for building in Palestinian territories for the past 50 years. Others are attracted by economic reasons, such as lower cost of living and higher subsidies from the government.

Settlers enjoy full rights as Israeli citizens, despite the state’s view of the West Bank as disputed territory and not sovereign territory. And while the population is diverse in their beliefs and backgrounds, they have in common the idea that there is little or no difference between the Jewish communities living on both sides of the Green Line.

Today, around 700,000 people live in the occupied West Bank and East Jerusalem, which the Palestinians and the international community consider one of the greatest impediments to lasting peace.

“It is an unstoppable campaign for annexation de facto of the Palestinian territory. The construction of settlements started long ago, but now their voices are heard much more and fear of repercussions less ”says Anna Khdair, legal researcher and part of al-Haq, a human rights organization based in Ramallah.

“In a way, I wonder if, now that it has become so common, there is a greater visibility of the suffering of the Palestinians, which could lead to change. It is important that we continue to talk about withdrawing funds and boycotting the settlements as if it were a normal plan of action rather than a radical act ”.

Ben & Jerry’s is far from being the only ones to take a position. Earlier this month, Norway’s largest investment fund announced that it would sell the assets of 16 companies working in the West Bank, including telecommunications giant Motorola. Likewise, the owner of the Israeli McDonald’s franchise has refused to settle in the settlements.

But after its withdrawal, the ice cream brand is likely to face an uphill battle when its brand license agreement in Israel expires at the end of next year. When Airbnb made a similar decision in 2018, it faced lawsuits in the United States and Israel alleging discrimination, prompting the company to back down five months later.

“Being cynical, if one company says it is not going to do any more business in the settlements, another will show up to take its place. But the case of Ben & Jerry’s is interesting because of how popular it is: this decision reaches every home in Israel “says Hagit Ofran, director of the observatory of the left-wing Zionist movement. Peace Now (Peace Now).

“If any other company had stopped importing bulldozers, hardly so many people would have noticed,” he adds.