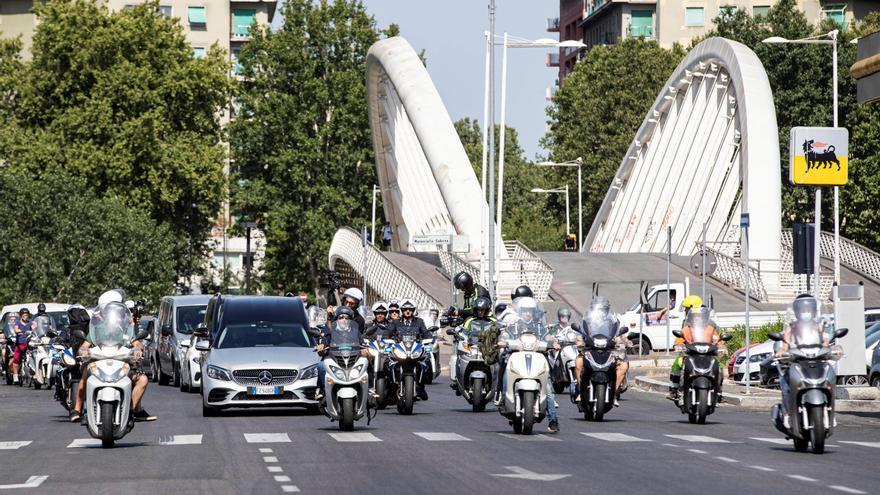 Rome, Jul 7 (EFE) .- Italy says goodbye today to its great diva, Raffaella Carrà, who died on Monday at the age of 78, with a three-day funeral that began with the parade of his coffin through television studios from the that conquered the whole world.

The country, still shocked by the unexpected news of his death, has turned to honor in style one of its most popular and beloved artists, also abroad, especially in Spain and Latin America, with countless events and proposals all types.

And this Wednesday it was time to say goodbye to this mythical blonde who with her characteristic self-confidence and humor delighted half the world with her dance songs and her successful television programs.

A FUNERAL FOR ALL HIGH

The diva will be dismissed with a three-day funeral that began this Wednesday with a tour of the television studios where she was born and increased her legend, those of public television RAI, as a last tour.

His coffin, an austere wooden box with a small bouquet of yellow roses, his favorite color, left his home aboard a car escorted by police motorcycles, in the Vigna Clara neighborhood, on the peaceful northern outskirts of the capital. .

Then he began his journey through the RAI studios, temples of the spectacle in that golden age (but in black and white) in which he made his debut, in the sixties. The first was the auditorium of the entity in the Foro Italico, which they have already proposed to baptize with his name.

At his door, hundreds of people welcomed the hearse to applause, despite the intense heat that permeates the city today.

Then he passed by the Vía Mazzini headquarters and the car even entered its main courtyard, where several policemen stood in his presence and was received with their songs and with the excited applause of hundreds of colleagues, friends and followers.

He then arrived at the Via Teulada studios, where the program “Studio Uno” was filmed, and also at the Teatro de las Victorias.

It was in the latter place that he recorded the variety show “Canzonissima”, a milestone in his rise. In fact, she ended up on everyone’s lips when she appeared for the first time in 1971 with a dress that revealed her navel, shocking the prudish Italy of the time.

And it was also in that program in which he presented one of his most famous songs, “Tuca tuca”, and his dance as a couple, which consisted of touching the knees, hips or the head of the other, which aroused the censorship and it irritated the Vatican itself.

SHOCK IN THE BURNING CHAPEL

After an hour and a half of touring Rome, the hearse reached the Palazzo del Campidoglio, the seat of the town hall, where a burning chapel was installed until Friday morning.

In the place, and in the shade, hundreds of people gathered, including many young people, to be the first to say goodbye to that lean and smiling woman with bright blonde hair with whom they grew up through the screen or the waves .

One of them is Mery, 59, who remembers in a conversation with Efe the times she had contact with the diva after going to work in the RAI locker room: “She did a lot of good for the young people,” she says excitedly and with a bouquet of white flowers in hand.

Salvatore, 67, pointed out that in the 1970s and 1980s Carrà’s presence on television was, in his opinion, “a glimpse of freedom, life and beauty” that has endured over time.

Her figure always inspired the creativity of Alessandro, 47, who has created various dolls for her. The last one he took with him to the burning chapel, dressed in red, one of the colors he most wore in his shows, such as that of his theme “Fiesta”.

The artist, who died of an unclear illness, although there is speculation with a tumor, made Rome her city, although she was born in northern Bologna in 1943 with the name of Raffaella Maria Roberta Pelloni. The pseudonym would come later, at the dawn of his fame.

However, the capital will dismiss her with all the honors she deserves. After the funeral procession, the coffin was received at the gates of the Campidoglio by the mayor, Virginia Raggi, and later placed in the room of the Protomoteca for the burning chapel.

Thousands of people are expected to parade through the hall to say their last goodbye to the star until Friday. Inside, the book of signatures was already beginning to fill a few minutes after its opening with words of admiration and affection towards this universal Italian.

The honors will culminate on Friday with a funeral in the church of Santa María in Ara Coeli and afterwards she will be cremated.