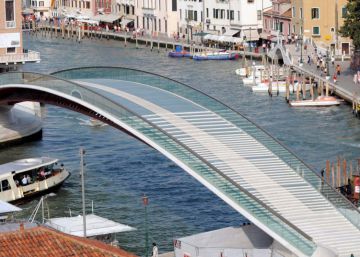 The Court of Accounts of Venice (northeast) has condemned the Spanish architect Santiago Calatrava to pay almost 78,000 euros for a series of errors that made construction more expensive of the Constitution Bridge of the city of canals. The court has finally sentenced the architect on appeal, after his acquittal in the first degree, to pay 77,969.74 euros to the public treasury of Venice for the cost of his controversial bridge, opened in 2008, because of a series of errors in your project. Together with him, the engineer from Venice, Salvatore Vento, has also been ordered to pay 10,989.73 euros.

Both must also face the costs of the process in the second instance, amounting to 7,267.81 euros. The sentence, which is dated August 6, indicates that the work finally cost 11.6 million compared to the 7 million initially planned.

The errors in the Calatrava project, the judges write, constitute a "gross negligence", as they resulted in the cost of the project, which has had to be modified several times since its inauguration. This is "even more serious" because the work was assigned to an "esteemed professional of world-wide reputation and of very high competence, with a long and proven experience in the construction of bridges".

The Constitution Bridge was built to link the Santa Lucia railway station with the Plaza Roma, where vehicles that arrive in the city are parked by their only land route. This infrastructure from the beginning was involved in problems, delays and controversy and has required several changes, such as the glass lastras of its floor by stone to avoid slips or the introduction of elements to improve its accessibility to people in wheelchairs. In 2015 the Venetian Court of Accounts had acquitted the architect of an alleged crime of cost overruns on the bridge.

Women as agents of change | Babelia