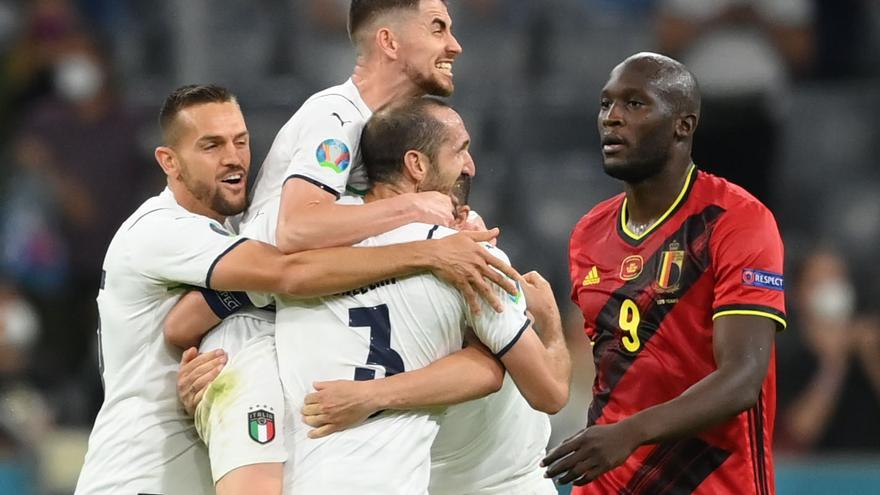 The Italy selection, with a granite defense and a forceful attack, beat 2-1 this Friday at Belgium in the quarterfinals of the Eurocup, at the Allianz Arena in Munich, and put the direct to the semifinals of Wembley, in which they will face Spain.

The goals of Nicoló Barella and Lorenzo Insigne in the first half launched an Italy that, after touching the ball with high quality, He brought out his most competitive and attentive version in defense to resist the attacks of Belgium, which closed distances with a maximum penalty from Romelu Lukaku and pressed until the last second without being able to avoid elimination.

The Italy of Roberto Mancini continued his path in the Eurocup of his redemption, after the World Cup absence, and was cited in the semifinals with Spain, which defeated Switzerland on penalties.

The Allianz Arena in Munich hosted the a priori most prestigious quarter-final of the European Championship and the field did not disappoint. Italy came out to play the ball with quality and Belgium, without Eden Hazard, was entrusted to the recovered Kevin De Bruyne, who ignited the “red devils” with his spectacular stride and his purest technique.

The suffered victory in overtime against Austria in the round of 16 seems to have released from the pressure of the knockout phase to an Italy that settled in the center of the Belgian field to play, against an opponent who tried to wait behind and release to its stars, De Bruyne and Lukaku with an open field.

The respective approaches gave life to a lively, vibrant match. An offside by Leonardo Bonucci prevented Italy from getting ahead of the quarter hour. Shortly after, a particular duel was opened between De Bruyne and the Italian goal Gianluigi Donnarumma, who denied him the goal with a monumental save.

Belgium had the merit, with Axel Witsel and Youri Tielemans, of achieving excellent ball outings after recovering the ball on their defensive line, something that allowed De Bruyne’s power to be released on the counterattack, but this strategy began to shake with the passing of the minutes against the combinations of Italy.

And the Italian push ended up breaking the wall. Nicoló Barella, with a powerful right cross from inside the area, broke the equality and Lorenzo Insigne, with a curved shot with his right leg from outside the area he fired the “azzurro” enthusiasm with the 2-0.

Belgium says goodbye to the Euro Cup in the quarterfinals. EFE

Italy, which until then had contained Lukaku with authority, thanks to the aggressive marking of Giorgio Chiellini and Leonardo Bonucci, stained his first half in the last minute, when Jeremy Doku, chosen by Roberto Martínez to replace Eden Hazard, was brought down in the area by Giovanni Di Lorenzo. The foul was light, but the push was clearly noticeable, something that convinced the referee to whistle and the VAR not to change their decision.

Lukaku, intractable from eleven meters, shot central and went up 1-2 to the marker that kept Belgium alive, despite the fact that the field indicated a superiority of Italy.

Despite the Italians continuing to play at the restart, Belgium pushed hard. The Inter Milan striker himself had in his boots the ball from De Bruyne’s equalizer to a low center, at game time, but he forgave. He fired with little force and little balance, and Leonardo Spinazzola intercepted under sticks.

Shortly after, he was inches away from heading a Nasser Chadli cross, another huge opportunity for Martinez’s team, as Italy began to protect themselves, with Bryan Cristante for Verratti.

But the most suffered change for Italy was that of Spinazzola, up to now the best “azzurro” player in this European Championship. He retired tearfully due to a muscle injury to his left thigh that ended his tournament.

Italy had to suffer and Belgium’s attack was led by the youngest on the field, a Doku who brushed the equalizer at 83 with a brilliant play down the left wing finished with a cut and a narrow shot high.

The last Italian scare came in 92, with a cross by De Bruyne in the area, in a set piece action, which Donnarumma managed to repel, with an added foul.

The latest thrill of an intense, vibrant and tough match that sent Italy to Wembley, where Spain awaits.

Incidents: Match corresponding to the quarterfinals of the European Championship played at the Allianz Arena in Munich before 12,984 spectators.

Tags: Belgium, imposes, it will be, Italy, rival