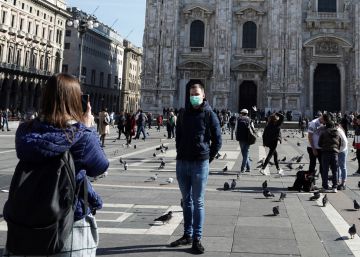 The impact of the coronavirus in Italy It already transcends the public health crisis and begins to infect the country’s economy. The number of countries that recommend avoiding trips to Italy —Bosnia, Ireland, Croatia or Israel, and Spain to certain areas— is growing and tourism reserves plummet. The cancellation of the Carnival of Venice, the closure of all musical and theatrical shows and the cancellation of fairs and congresses such as the Milan Furniture Fair were the first warning. In Spain, the sector looks at the evolution of the crisis without providing, for now, impact data. The general message is one of tranquility, although the fall in reserves in the transalpine country is of concern.

Tourism, which generates 12% of the Italian economy With a turnover of 146,000 million euros, note the stab of cancellations. The fifth most visited country in the world trembles and the employers of the sector remember that about 60,000 jobs are at stake. The litmus test will be Holy Week, operators begin to fear that the worst forecasts will be met. Naples has lost 15,000 visitors and is expected to fall 30% for the holiday period. Venice has announced that there have already been 40% cancellations. The worst data is provided by the Lazio region, with Rome as the main focus of tourism: the fall in reserves reaches around 60%.

To the foreseeable absence of Chinese tourists in the coming months, the fear of Europeans traveling to Italy is now added. The one of the hotel guild of the Friuli Venezia Giulia region, Paola Schneider, explained that the sector is “on the verge of collapse”. “Tourism has suffered cancellations of up to 80% in cities and up to 95% in the mountains. Even places like Trieste are already having huge problems for summer reservations. ” Beyond prevention, tourists from countries that force their citizens to undergo a quarantine when returning from risk areas want to avoid going through that trance.

The fear of traveling to Italy is also felt by tourist agents in Spain. Carlos Garrido, vice president of the Spanish Confederation of Travel Agencies describes “moderate cancellations throughout Italy and a little stronger to the north.” The situation is “completely paralyzed in China,” adds the employer’s representative. At the moment it does not affect the rest of the destinations, although “people are expectant and ask what happens if they later cancel the trip”.

Neither the Confederation of Travel Agencies nor any of the main organizations in the sector have made public impact calculations in Spain. “It is soon,” says Garrido, who remembers that, despite finding us a month and a half from Holy Week, February always has little activity. The month of April of last year, in which the Holy Week campaign fell, brought to Spain 8.5% of the total of tourists throughout the year and 7.7% of tourist spending. The vice president of the employer assures that, for now, expectations are good for destinations such as Ibiza or the Canary Islands.

And the tourist rhythm of the Canary Islands It has barely changed despite the four positive cases of coronavirus registered in a hotel in the south of Tenerife. Hoteliers and local authorities recognize that some tourists have canceled their reservations at the last minute due to the risk of an epidemic, but say they are not a significant number.

In fact, the new customers of the hotel where the infected were staying, in the municipality of Adeje, who have not been able to access because the enclosure is closed to lime and edge to prevent a spread, they have remained in resorts neighbors who, according to the City Council, are full.

Adeje tourists, mostly retired (in theory the population most at risk) British, Belgian and German, take the matter with philosophy. “Anyone doesn’t lie to me,” says a 70-year-old man while drinking a beer in a pub English. He is at home, he says, and in fact it seems that he is at home. It is attended by an English waitress and of the same nationality is another woman who, microphone in hand, walks the tables telling jokes risque.

The mayor of the town, José Miguel Rodríguez, does not hide an obvious concern for a town that “lives off tourism.” The authorities have no data on the impact of the first case of coronavirus in Spain being detected in the Canary Islands, but they do not seem pessimistic. Ashotel, the patron saint of hotels in Santa Cruz de Tenerife, has called for calm and, in passing, reminds tourists and locals that Spain has “a first class health”.