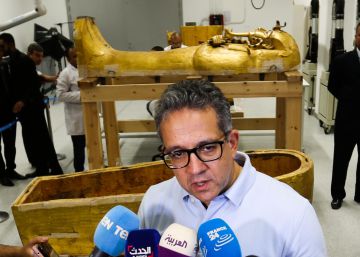 The bustle of the Al Abasiya district, in the Islamic heart of Cairo, sneaks through the windows of the office of Jaled El-Enany, a 49-year-old Egyptologist whom the Egyptian president, Abdelfatá al Sisi, commissioned in 2016 the Ministry complex of Antiquities and to which the strategic Tourism portfolio added last year. The next inauguration dthe Great Museum of Giza, the gigantic historical container that already stands in the shadow of the trio of legendary pyramids, grabs all the attention of this professor, who has had to pilot the policy of recovery of cultural tourism after a catastrophic five years for the sector in the country of the pharaohs

“The Great Museum,” he boasts, “is one of the great cultural projects in the world, with a budget of one billion dollars (924.71 million euros) to exhibit tens of thousands of objects of ancient Egypt, many of which will be exposed to the public for the first time. ”

Satisfaction is erased from his countenance when the interview with THE COUNTRY leads to the controversy raised in Madrid around the temple of Debod by veteran Egyptologist Zahi Hawass, who preceded him in the Ministry of Antiquities until the revolution of 2011. Hawass argues that the Nubian monument rescued 52 years ago from the waters of the Aswan Dam and resettled on the site of sad memory of the Mountain Barracks in bad weather suffers from the inclement weather of the Madrid climate. “If it is not covered and protected, the temple would have to be returned to its country of origin”, This charismatic Egyptologist came to warn, who almost two decades ago claimed the British Museum for the restitution of the famous Rosetta stone.

“The temple was offered to the Spanish people on the condition that it be visible and accessible,” said Minister El-Enany pedagogy, “in gratitude to the Egyptian people for their contribution to the international campaign to safeguard Nubian monuments.” Unesco is preparing to commemorate in the coming weeks the 40th anniversary of the end of one of the most important archaeological missions in its history, in which unique jewels such as Abu Simbel were rescued from the recreated waters of the Nile. “We offered the temple of Debod to Madrid,” continues the calculated argument the head of the portfolio of Antiquities, “and we have full confidence that the Spanish Government, which has given plenty of respect for the historical heritage, will take all measures in order to protect this monument in the best way for the enjoyment of future generations and of all humanity ”.

–If Spain does not cover the templeAs other recipient countries have done to prevent deterioration, would Egypt claim their property?

—It would seem inconceivable that a country like Spain, of a great culture and civilization, did not protect the temple of Debod from its destruction. Otherwise, we would have to discuss it with our Spanish colleagues. Spain has a double responsibility for a monument saved by Unesco and given by Egypt.

The Government of Cairo regularly repatriates archaeological remains from all countries of the world, according to the minister of the branch. “Through diplomatic channels, through judicial processes, through direct negotiations, thanks to generous donations from the patron of the Gulf …”, details Professor El-Enany, who recently appeared photographed in the Cairo press along with a valuable freshly coffin returned by the United States, after being sold to an antique dealer in 1971 with false documentation. “All countries have the right to recover their pillaged works of art,” he says.

While the controversial Hawass he does not hesitate to claim for Egypt the bust of Nefertiti that is exhibited in Berlin or the Dendera Zodiac guarded in the Louvre, the current head of Egyptian archeology believes that “we must respect the decisions taken in colonial times on the exit of archaeological objects taken legally.”

The minister returns to the Comfort zone of the Grand Museum of Giza to announce its official opening later this year thanks to the day and night effort of 8,000 workers and technicians. Sources from his department that prefer not to be cited point to a date around October 6, when Egypt commemorates the victorious start of the Yom Kippur War against Israel in 1973. “The new Giza complex is going to be a cultural asset and Very high quality tourist. In a few hours, the visitor will be able to access the pyramid of Cheops and, a few hundred meters away, contemplate in the ‘modern pyramid’ of the Great Museum vestiges such as the suspended obelisk or the Colossi of Ramses II ”.

“We expect around five million annual visitors, including foreigners and Egyptians, in front of the three million who come to the old museum in Tahrir Square,” adds El-Enany. The construction of new roads and hotels accompanies the project, which already has the new international airport of the Sphinx about twenty kilometers away. The turnaround of cultural tourism to Giza, west of the congested city of Cairo, is as clear as the flight from official Egypt to the east, where the pharaonic works of the New Administrative Capital, also sponsored by President Abdelfatá, are completed to Sisi.