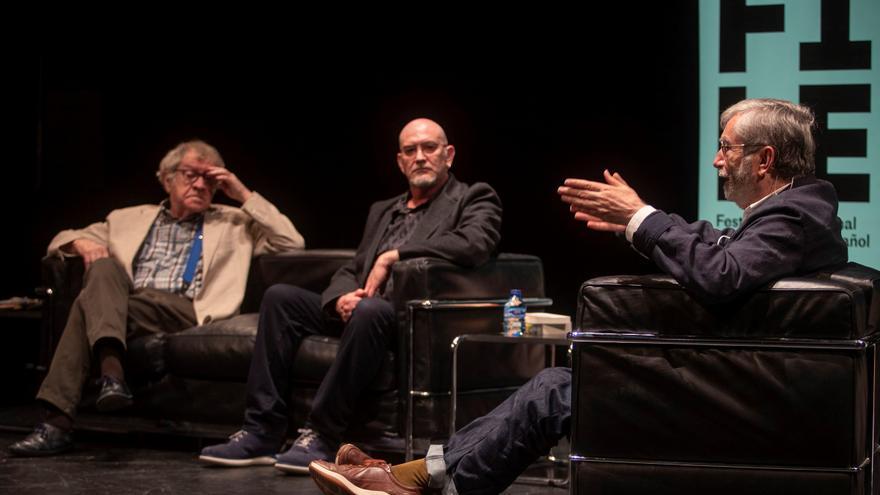 Soria, Jun 20 (EFE) .- The Hispanicist Ian Gibson and the academic Antonio Muñoz Molina have agreed this Sunday that it would be a historical error to transfer the mortal remains of Antonio Machado from Collioure (France) to Spain, because his presence there makes him in a "sacred space" and contextualizes his tragic end in exile.

During his conversation in the framework of the International Festival of Literature in Spanish of Castilla y León, in an event held in Soria, one of the places of reference when speaking of the universal Sevillian writer, Muñoz Molina has defended that, as with the Granada-born Barranco of Víznar and the death of Lorca, these are "definitive places that do not admit manipulation" of the circumstances in which their deaths occurred.

"Only the land where you die is ours," Muñoz Molina has quoted in reference to a phrase written by Machado and that in his opinion gives meaning to his position that his presence in France "is irrevocable."

In the same sense, Gibson has ruled that "at all" it is necessary to promote the transfer of Machado's remains to Spain, because if so, he has predicted that "in 50 years a part of his history would be forgotten": "Nor do I think that the family is for the work, "he added.

Both have agreed on the historical value that the context has on the death of characters such as Machado and Lorca, and in the case of Muñoz Molina he has compared the circumstances in which the deaths of both occurred with the illustrious writers of the United Kingdom, since most of them receive honors at open tombs in London.

For Muñoz Molina, the "shudder" of verifying that these top writers of Spanish literature rest "in exile or in mass graves" is a feeling that must be experienced "by all": "Until we feel that misfortune, let's be on the left or rights, until we feel that horror as our own, we will continue the same, "he lamented about the way Spain looks at its past.

In fact, at the beginning of his conversation with the Spanish-Irish author, the Jaen writer stated that "in a country with such difficult memory and so little interest in history, (Gibson) has been one of the people who has preserved and saved our most valuable history. "

"In Spain everything is abandoned, everything is forgotten, no papers are kept," lamented Muñoz Molina as a compliment to his interlocutor, who "deserves gratitude and celebration."

Gibson has acknowledged that he feels for Spain, as does his country of origin, Ireland, "a mixture of passionate love and anger", because "it could be much better than it is", in a feeling that he has said he shares with Machado , which said "terrible things about the Spanish."

"When I criticize sometimes I do not like", has assumed after regretting that sometimes they tell him to return to his country, but noting that he has Spanish nationality since 1984 and is also "clean": "I have nothing in Andorra", he has ironized .

"I want the great Spain of Machado, the cultured one, the calm one speaking," said Gibson, who misses listening to whoever is in front of him and a later and calm exchange of arguments, instead of the monologues that he perceives, also in the noisy Madrid terraces.

Muñoz Molina also shared this vision of Spain and recalled Manuel Azaña's dream of a "patriotism based on temperate zones of the spirit." "All that was ruined," the academic has lamented about the "gigantic catastrophe" that the war and the subsequent dictatorship entailed, but also because of the Transition's disinterest in restoring the value of its illustrious people, in a kind of "national burricie" based in "despising the best we have."

"Forty years are many, many years of fear, of fear, of not being able to recognize what has happened, a tragic traffic jam in this country," Gibson has summarized.

Tags: error, Gibson, grave, Machado, mill, Munoz, they coincide, to bring, would be