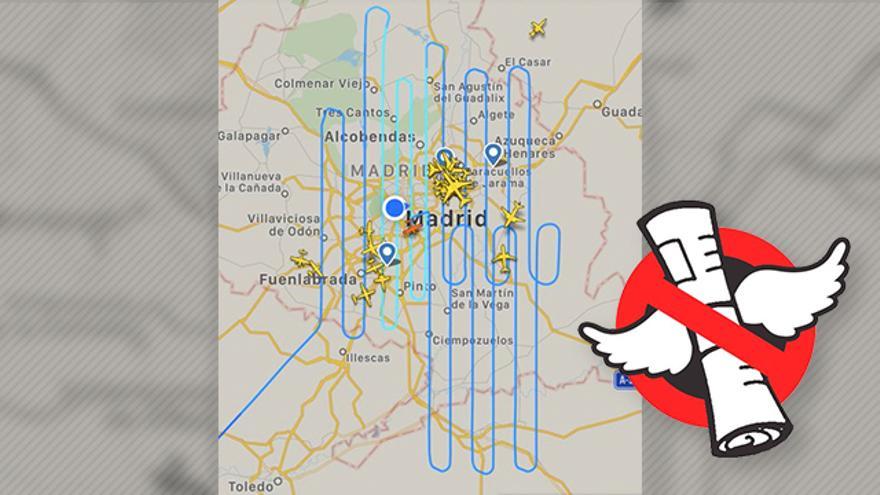 Several users of social networks have questioned this week the objectives of a small aircraft that has flown over the city of Madrid with a zigzag route. It all started with the tweet by geologist Antonio Giraldo, who speculated that the plane was “fumigating Madrid” and attached a capture with its trajectory. Resurrecting the conspiracy theory of the chemtrails and relating it to the high numbers of coronavirus infections registered in the capital, several accounts that spread this type of hoax have taken the opportunity to ensure that this is how “asymptomatic patients are sought” among the population and make other similar assertions.

However, the actual explanation of the plane’s path is simpler. According to Enaire, the body that manages air traffic in Spain, the aircraft that originated the hoax was on a mission to photogrammetry, a technique for measuring spaces and objects from images taken, in this case, by air. “The only thing we can point out is that it was cartography work,” sources from the institution explain to El Cazabulos.

Circular paths and those that lead aircraft to repeatedly fly over the same area are far from exceptional either. “Aerial work is common every day in our airspace”, they detail from Enaire: “These aircraft that repeat a pattern are carrying out different jobs depending on the case. They can be calibrations of air navigation radio aids, inspection of airlines, photography aerial and photogrammetry, which is what this aircraft was doing on Wednesday over Madrid “.

“These types of flights are coordinated and processed by ENAIRE as the airspace manager and are carried out with absolute normality and safety,” the agency concludes.

For years, professionals in the aeronautical industry and climatological studies (like this review from AEMET, the Spanish Meteorology Agency) have explained that the white contrail left by aircraft in the sky is produced as a result of the condensation of water vapor that these devices expel when moving. Of all the gases that your engines emit, only water vapor influences their formation.

When the right conditions are right, stelae can stay in the sky for hours. “This occurs when the humidity in the atmosphere is very close to the level of condensation, and it is easy for the atmospheric water vapor to condense on the ice particles of the wake. If there is also some instability and turbulence, the contrails are taking an irregular shape. These stelae, in addition, can be displaced by the wind “, explains the AEMET.

Despite everything, it is common for people who believe and spread the conspiracy theory that states that these stelae have some kind of health consequence now relate it to the coronavirus.