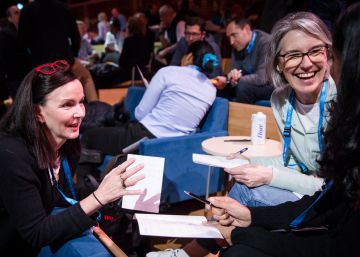 In times of polarization, impossible agreements and irreconcilable positions, it is surprising to rediscover that people are perfectly prepared to understand each other without problems. Even in situations where they start from antagonistic positions, on ideological issues that favor obstinacy. "We talked about being in the apocalypse of reason, with terraplanistas, anti-vaccines, etc., that reason has lost strength and that we live in the era of temperament, "says neuroscientist Mariano Sigman. And adds:" Reason retains its strength, but not on Twitter; it has strength in the places where human communication can develop. "

"We have abandoned the dialogue because we do not believe it works, but we have to propitiate the conditions," Sigman says.

He says it with data in his hand. Sigman has seen in his experiments how thousands of people reached agreements with others in a little while, even when they started from completely opposite positions. "It is surprising to discover how many groups reach an agreement when you have completely antagonistic people, especially with regard to the expectations we have. We believe that we have a great rigidity of moral principles, but we change them even without knowing it", he says." In these cases of antagonistic people, it turns out that an agreement is reached with a probability of an order of magnitude larger than people thought: 25% to 30% of the time they agree, to everyone's surprise, "says the neuroscientist." We don't know what would happen with more time, but we know that only two minutes are enough, that small dose is already effective, "he says.

Sigman of the Tella University, has been doing macro experiments for several years that have a bit of performances, as he defines them, along with his colleagues Joaquín Navajas and Dan Ariely (from Duke). They use as experimental subjects the five thousand people who attend mass talks and carry out with them fleeting studies on human behavior. The last study they have published, in the prestigious magazine Current Biology, It explains the conditions in which these cases of fleeting depolarization work.

This study has an important background that helps to understand the results. In a previous experiment They had found that people, with a simple conversation in a small group, significantly multiply the efficiency of their decisions. It is known that in many circumstances what is called collective wisdom works: if a large group of people are individually asked about the height of the Eiffel Tower, very few will approach, but the average of all responses will be close enough. The same was done in the study, but before revealing the correct data, five thousand participants were invited to agree on a response in groups of five people. The average of the groups was much more accurate than the average of all subjects separately. Surprisingly, the average of only four groups of five people already improved the total average.

Sigman explains that when we decide something many times we don't know why and it can simply be a quick and intuitive decision. "But as soon as you have to argue you realize possible errors in your reasoning," says Sigman, "the simple fact of talking with others, in two minutes, improves markedly in the decision-making process, which is anchored in inefficient procedures." . Then, scientists wondered what would happen to decisions in which there is no single truth, such as the height of a tower, but multiple subjective truths.

The five thousand people were proposed complex situations such as abortion, incest or the choice of the children's genes, and they had to judge whether they were in favor or against

The five thousand people who participated in this work were proposed complex situations, prone to polarize opinions such as late abortion, incest or the choice of the children's genes, and should judge whether they were in favor or against . But the options were not binary, but a scale with "quantitative gray" between the totally negative 1 and the completely favorable 10. Then they were put together in groups of three people to behave like an ethics committee that should choose a number that represent everyone as a group, by consensus, in two minutes. "They had no obligation to reach an agreement, they just had to talk to see if they could do it," Sigman explains, since they had the option of leaving their group as fruitless.

To his surprise, many groups reached consensus even when there were subjects with conflicting opinions. When analyzing the successful trios, some striking patterns appeared that offer interesting clues. As the so-called "high confidence gray", people with moderate positions but much confidence in their position, managed to reduce the polarization of the other two people with more extreme ideas. These scientists explain that, in general, people who are in the middle do so because they doubt, while extremists tend to be in two ways: extremists in their position and confidence in what they say. "But these high-confidence grays help moderate," Sigman summarizes. And he adds: "The problem in politics, for example, is that nobody sees it from outside, we all have a firm opinion."

Another aspect that they discovered is that agreements were not reached in the groups in which there was a lot of asymmetry, that is, when two people of an extreme opinion against another of the opposite current came together. "The two against one does not work, because that one alone at the end does not move from there for more people who put you against it," says the neuroscientist. And he summarizes his conclusions: "We have abandoned the dialogue because we do not believe it works, but we have to propitiate the conditions: few people, quiet talk, diverse opinions, and that we are in listening mode, not trying to destroy the other."