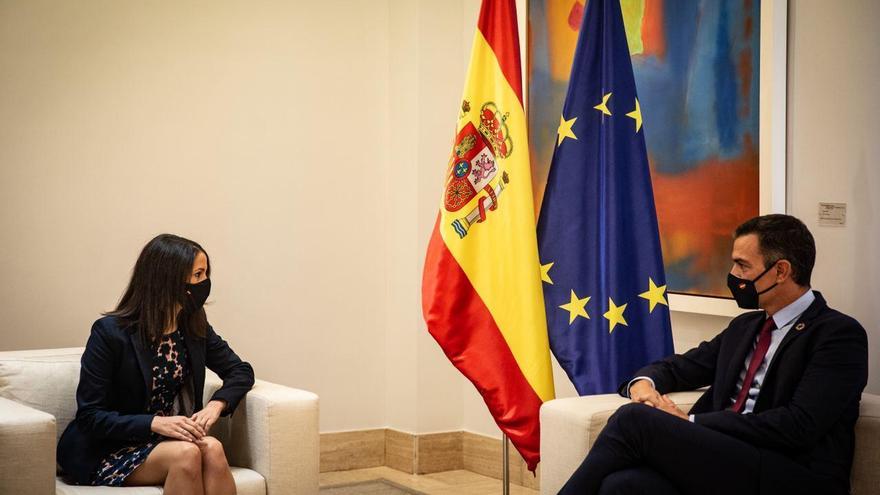 The president of Ciudadanos, Inés Arrimadas, has assured after just over two hours of meeting with Pedro Sánchez in Moncloa, that he has attended the meeting with the aim of negotiating with the Government because he believes that “it is time to pitch in , to be responsible and constructive. ” “With that spirit we are going to continue,” she said from the Moncloa press room, after her meeting with the Prime Minister. Arrimadas has revealed that he has asked Sánchez to promote “a political truce” to reduce tension and end the confrontations, a request that has been extended to “all political leaders.” “We are in an exceptional situation”, has framed her approach to the Government to negotiate the public accounts after having endorsed all the extensions of the state of alarm.

Sánchez and Arrimadas, who have attended for the first time in person to meet with the Prime Minister -the previous one was in Congress-, have reviewed the “co-governance” measures agreed with the autonomies to fight against the outbreaks of the pandemic and have also discussed the renewal of positions of the General Council of the Judiciary (CGPJ), a matter on which Arrimadas refuses to negotiate. The Citizen leader has certified her refusal to agree to the renewal of this body, which has been in office for two years, but has indicated that “it has a very easy and fantastic solution, which is to propose to the two major parties that urgently face” a reform that renews the election system. “” Look if I make it easy for you, “the leader of Ciudadanos has ironized.

But the priority now for Sánchez is the General State Budgets for 2021 in which Citizens are willing to collaborate. “We must make moderate and serious budgets and we want them to be as sensible as possible,” said Arrimadas, who has once again warned that public accounts cannot be left “in the hands of Rufián and Otegi.” He has agreed with Casado on the idea of ​​creating an independent agency to manage these European funds.

“It is not easy to negotiate with this Government,” Arrimadas warned during his appearance at La Moncloa, but then he explained why he lifts the veto on Pedro Sánchez established by his predecessor, Albert Rivera: “From Ciudadanos we want an image of solvency of Spain outside our country “. “We need to execute European funds. These are not normal budgets, we are in an exceptional situation,” he insisted.

Sánchez received the leader of Ciudadanos on the steps of the Palace, both wearing masks, and they greeted each other with their elbows. On the other hand, Arrimadas has shown his support for Sánchez in the measures to stop the outbreaks of Covid-19 but has asked him to extend the Ertes beyond September and guarantee an orderly and coordinated “return to school” with all the CCAA and not that there are 17 protocols.

The attitude of Arrimadas, however, contrasts with the one that hours before he has maintained Pablo Casado in his meeting with the President of the Government, to whom he has advanced his absolute refusal to agree to all these matters, starting with budgets, while Podemos is part of the Executive.

Tags: budgets, Close up, constructive, interview, moment, pull up, responsible, Sanchez, shoulder, we will be