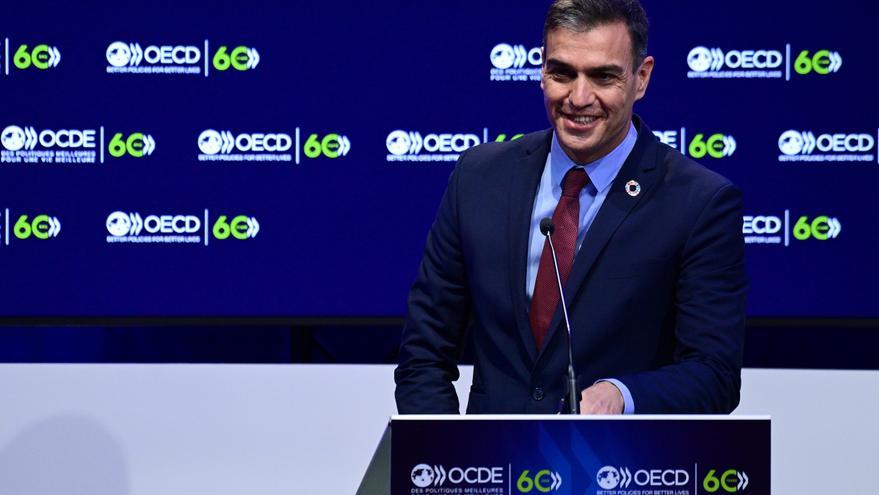 Pedro Sánchez has defended that state regulations protect the rights of workers to the maximum. In a speech delivered to commemorate the 60th anniversary of the OECD, the Prime Minister expressed his concern about the “thinning out” and gradual precariousness of the middle class. In fact, he has assured that the COVID-19 pandemic has abounded in inequalities, especially of women and “precarious youth.” Thus, it has bet that labor regulations promote working conditions and that economic growth is directed towards social welfare and is not a goal in itself. “Economic growth alone is no longer the answer to achieve well-being,” he reflected.

“It is time for labor regulations to promote productivity through fair wages, decent working conditions and strengthened social dialogue,” Sánchez said at that international forum, hosted by French Prime Minister Emmanuel Macron. The president has spoken in those terms at a time when the Government has different positions on the increase in the Interprofessional Minimum Wage for 2021. The Minister of Labor (United We Can), Yolanda Díaz, is in favor of raising it while the economic vice president , Nadia Calviño, has been favorable to the position of the employer to freeze it. “A good part of our measures to support companies, particularly SMEs and the self-employed, are aimed at containing costs due to the fall in their income,” he said in an interview with the Colpisa agency.

The Secretary of Organization and Minister of Transport, José Luis Ábalos, has ensured that the decision to raise the SMI or not has to be adopted within the social dialogue, which is one of the flags that Sánchez has raised in his speech. After arriving in Moncloa, Sánchez raised the minimum wage from 735 euros per month to 900 and last year there was a new rise, after arduous negotiation with unions and employers, which ended with a rise to 950 euros. The Labor Minister wants that negotiation to take place again this week. The goal of the coalition is for the SMI to be at the median salary at the end of the legislature.

Sánchez has said that this precariousness has been “only partially counteracted” with state measures such as the minimum wage or state aid. “My Government is firmly committed to reversing these trends. We have increased the minimum wage, introduced a Minimum Living Income for vulnerable families and implemented short-time work, as well as job suspension plans to protect jobs during the pandemic and after it, “said the president, who has not made any specific reference to what his plan is regarding the SMI for next year.

The Prime Minister has also advocated for directing economic growth towards social welfare. “The idea that economic growth automatically reaches all sectors of society is widely discredited,” said Sánchez at that international forum, in which he has also opted for digitization, ecological transition and social and territorial cohesion as backbones of recovery. For this, he said, a “different growth model” is necessary: ​​”We are only at the beginning of a long process, but we know that economic growth alone is no longer the answer to achieve well-being and prosperity for all.”

“Economic growth is not only a rate that must be reached, it should also have a direction, a clear purpose: to improve the well-being of the majority of citizens, reduce inequalities and serve as a transition towards a decarbonized economy,” said Sánchez, which has opted for “public investment and regulatory changes” as the spearhead for this new model. “Progress will challenge the status quo; but we will prevail “, has sentenced.