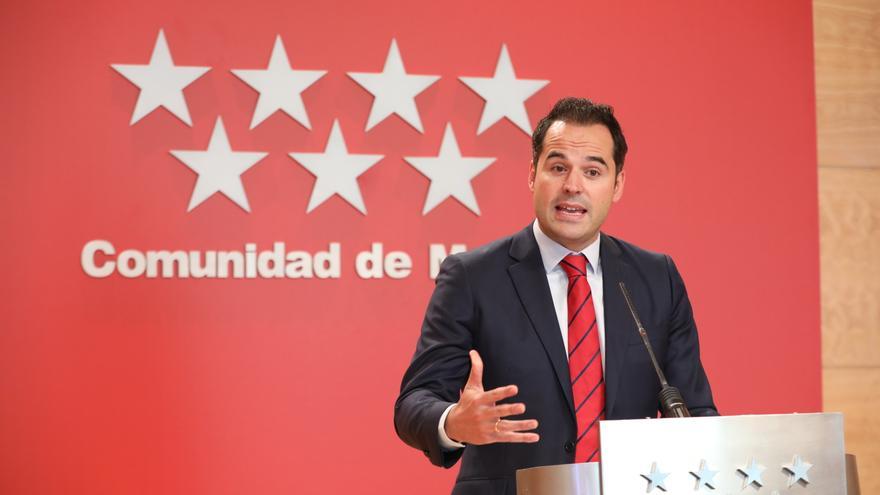 The vice president of the Community of Madrid, Ignacio Aguado, has claimed this Wednesday his role as arbitrator in the midst of the confrontations between the central and regional governments on what measures should be taken to stop the pandemic in the region. When last Friday the clash between both administrations became clear with two simultaneous press conferences in which each one put their criteria on the table to combat the spread of the virus, Aguado decided to erase himself from the news. For two days, the regional vice president made no comment. It was not until Sunday afternoon, when he stated that he had contacted the Minister of Health, Salvador Illa, and the Minister of Territorial Policy, Carolina Darias, so that the work meetings of which he is a part could be resumed.

“[El de árbitro] It is the only role I can play at this time “, said the vice president of the regional government:” I am not a doctor, I am not a scientist, what I am is a vice president and representative of all Madrilenians and I think that at times, like the current one, what citizens are asking of us is that we understand each other and that we stop looking for guilty parties and start solving problems, “he defended. And he continued:” It is the best job that I can perform at the moment regardless of my other responsibilities. ” “It was important that the administrations understood each other and I think we are achieving it,” he concluded.

Aguado has insisted on “putting in value” the preliminary agreement reached this Tuesday between the Ministry of Health and the regional government so that the criteria of the central government are implemented in all those municipalities of the country with more than 100,000 inhabitants that have an accumulated incidence of 500 cases per 100,000 inhabitants in the last 14 days, a positivity rate of 10% and an ICU occupancy of 35%.

The vice president and also spokesman for the Government of the Community of Madrid also assured during the press conference after the Government Council that this Tuesday “an important step” was taken with the agreement, and has again advocated for “forgetting about the rifirafes “. Aguado has avoided making any kind of assessment of it and the Health draft and has called for the afternoon meeting at the Interterritorial Council this afternoon. “Yesterday a necessary step was taken, but not enough to have a closing agreement,” said Aguado, who also defended that he hoped that a “consensus” would be reached among all administrations.

But while the press conference of the vice president, the Ministry of Health of the Community of Madrid has issued a brief communication in which it assured that Madrid’s position would be made public in the Inter-territorial Health Commission through a statement. A position that Aguado was unaware of at the time of his appearance.

The draft of the document that the Ministry of Health is going to present to the autonomous communities for approval on Wednesday afternoon in the Interterritorial Council implies, for the cities that meet the proposed criteria, that: the entry and exit of people from the municipalities except for reasons of force majeure; groups of people will be reduced to a maximum of 6 both on public roads and in private spaces; and the playgrounds will be closed. It does not imply that trips within the municipality cannot be made. The document does specify, to which elDiario.es has had access, various capacity restrictions in wakes (limited to fifteen people), places of worship (30%) and establishments of all kinds (50%). Communities must also “strengthen their capacities for early detection and control of the disease.” All the cities that meet these requirements are in the Community of Madrid: Madrid capital and nine more.

Finance charges a quarter of its tax increase on 1,700 companies and 36,200 individuals with high incomes Economy