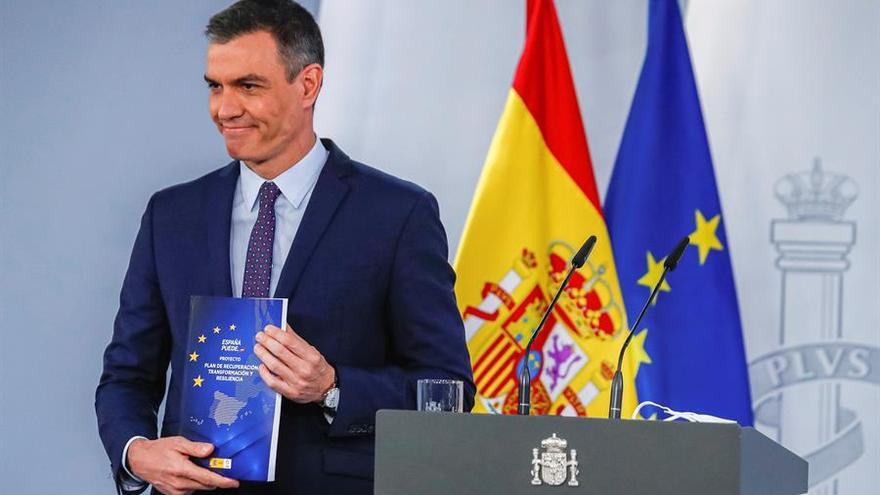 Pedro Sánchez has presented the master lines of the recovery plan that the Government has drawn up with 140,000 million of European funds and of which about 70,000 will be invested in the next three years with what the Government believes that the effects will be possible. start to notice in the economy very soon. “Occasions like this come up a couple of times in the century. Spain is not going to let this opportunity go by ”, said the president, who has assured that the ‘Marshall plan’ of the Next Generation funds – which will involve a total of 212 measures (110 investments and 102 reforms) – represents an opportunity of progress and growth for Spain only comparable in recent history with the entry into the EU. “It is the most ambitious and most momentous economic plan in the recent history of Spain,” he stated.

President It has shelled in what the first part of these funds will be invested: 39% for ecological transition, 29% for digital transformation, 10.5% of the resources allocated to education and training and 7% for R & D & I and has also listed the main measures that will be implemented with more than 50,000 million euros. Of that figure, 20,000 million will be for the two most important areas: the Sustainable, Safe and Connected Mobility Strategy, with 13,200 million, and the Housing Rehabilitation and Urban Regeneration Program, with 6,820 million.

Sánchez insists that it is necessary to give a response to the crisis that COVID-19 leaves different from the one that occurred in the 2008 recession and also to start the modernization of the country that has been delayed for different reasons, among the which has cited “the laziness” of previous executives or the political “blockade” of recent years. The president stressed that the pandemic has made the transformation of the country even more urgent. “In 2020, with the arrival of the virus, the excesses of speculation and the ravages of austericide were in evidence.” has remarked.

After recalling that the Government worked “tenaciously” in Brussels to achieve the agreement of European funds this summer, Sánchez insisted that it opens up an “opportunity” that cannot be missed for a “hopeful future”. “What we are deciding is which country we want for the coming decades and which we aspire to in the future,” he said in his appearance this Tuesday in Moncloa after the meeting of the Council of Ministers and, later, of the inter-ministerial commission that has drawn up the plan that this Wednesday will outline in Congress as a step prior to its final approval in the coming days. “We have a horizon of extraordinary importance. There is a project, a plan that is already underway. We have everything ready to start developing the first projects the day after they are approved by the European Commission,” he said.

Sánchez has ensured that the plan is aimed at five fundamental objectives: modernizing the productive fabric and the Administration; increase productivity and potential growth of the economy; promote the ability to create quality jobs throughout the national territory; reduce the social and gender gaps widened since the financial crisis; and promoting a green economy while advancing in the fight against climate change and the protection of biodiversity. The intention is that in the short term the economy recovers to levels prior to the pandemic, in the middle the transformation of the economy is promoted and in the long term “a robust, sustainable and resilient development from the economic point of view is achieved-” financial, social and environmental “.

That is why he has justified that the PSOE candidate, Ángel Gabilondo, stresses that he will not touch taxes if he becomes president of the Community of Madrid in the next two years, despite the fact that the Socialists have defended the need to raise some, such as that of Heritage that is totally subsidized in the region, to end the fiscal dumping of which other autonomous governments complain. In fact, he has been convinced that the presidents of Madrid, Galicia or Castilla y León do not have the same tax proposal because they face different challenges in their territories. Thus, he has defended Gabilondo’s position and recalled that the Government also parked the tax reform to prioritize recovery.