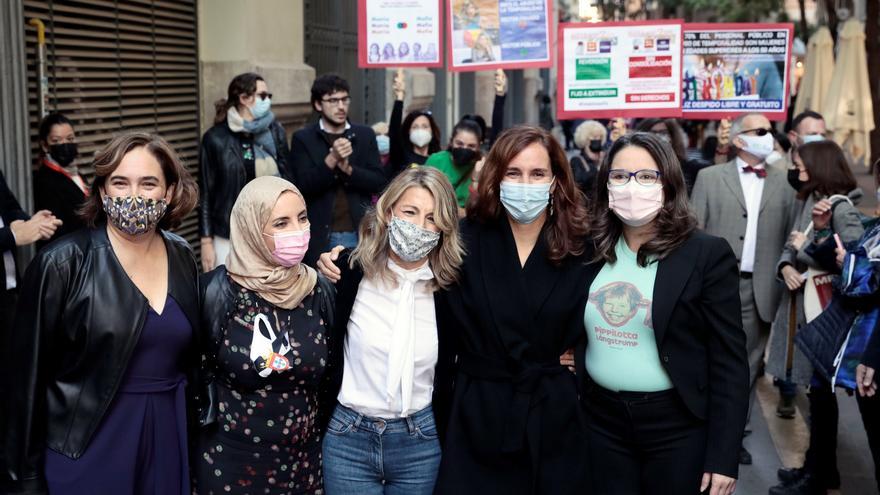 Yolanda Díaz assures that the event held this Saturday in Valencia with Mónica Oltra, Mónica García, Ada Colau and Fatima H. ​​Hossain “is the beginning of something that is going to be wonderful.” The vice president has been “very excited” to meet women whom she appreciates. “I know that people are expecting different things. I know there was a lot of expectation ”, acknowledged the second vice president.

With a dedicated audience, which has received the guests with a great ovation and Díaz under the cry of ‘president president’, a dialogue was held between the five participants about their political experiences, baptized as ‘Other Policies’ and moderated by the journalist Carolina Ferre. In her speeches, the Minister of Labor has given some brushstroke on the country project to which Díaz aspires: “Politics must be climate, with life at the center.” “We should work on a project in favor of the people, in favor of education,” acknowledged the Minister of Labor, who insists that from the institutions “yes, people’s lives can be changed.”

With a capacity of around a thousand attendees, the Olympia Theater has put up the full-capacity poster. The entrance of the intervening parties to the enclosure has been tumultuous. The assistants have cheered the interveners, while a dozen transporters have concentrated to demand an improvement in their working conditions and have struggled with the police officers.

The mayor of Barcelona, ​​Ada Colau, has acknowledged that the participants in these events are “overwhelmed by the expectations” that this event has generated. Mónica García, the leader of Más Madrid, has been sincere and explained that before jumping on stage “everything was shaking everyone”. “We are diverse and we are vulnerable,” he stressed. The intervening parties have insisted on their commitment to face public management with a feminist profile. “We have normalized that shouting is above dialogue, and insults are above listening,” García pointed out. Along the same lines, Colau has acknowledged that they are “fed up with tension.”

The absence of representatives of Podemos in this act has also been addressed by the intervening parties. Oltra, organizer of the event, has responded that the debate should “be manageable”. “We are all that we are, not all that are. I think we represent many who are not here and I think they feel represented by the women who are here ”, he pointed out. Although, there have also been references to right-wing representatives. “Ayuso didn’t feel like it either [invitarla]”, Has responded on the choice of the intervening parties.

The act has been promoted by Compromís. Along with Díaz, the leader of Más Madrid, Mónica García; the regional deputy of Ceuta and spokesperson for the Movement for Dignity and Citizenship, Ceuta Fatima H. ​​Hossain, the vice-president of the Generalitat, Mónica Oltra and the mayor of Barcelona, ​​Ada Colau.