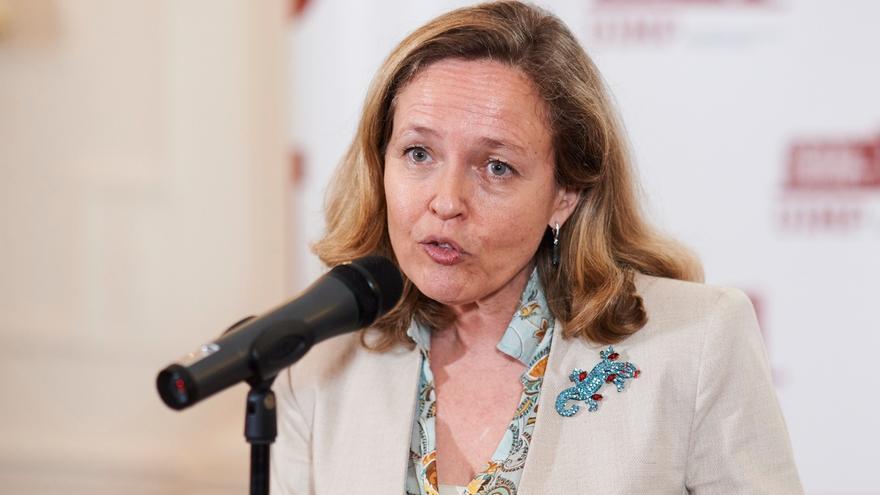 This Monday the summer courses of the Menéndez Pelayo International University began in Santander, organized in collaboration with the Association of Economic Information Journalists. The person in charge of opening this year's edition was the Second Vice President and Minister of Economic Affairs, Nadia Calviño, in a conference together with the president of BBVA, Carlos Torres. Both have valued the economic news of the country and have not ignored the criticisms that the minister had already made about the ERE in the financial sector in entities with benefits, such as the case of BBVA itself, and the salaries of executives.

Calviño has taken up these criticisms and, although he has conceded that the banking sector is in full "reconversion" due to temporary factors (low interest rates) and structural factors (new competitors), measures beyond its size must be taken into account. "It is not positive to raise the future of a sector only by reducing the number of employees," said the minister to Torres, whose entity has recently agreed an ERE for more than 2,900 people. "It is about that the sector recovers the role that corresponds to it, we need financial entities with a future perspective," he emphasized.

Torres has responded to these words by assuring that what the sector is doing is "going after what customers ask for." "It is necessary to pay less attention to the job that is lost, the activity was very transactional and of less added value," he added, ensuring that the sector is "reconverting" towards new business models, among which he has highlighted "helping to customers make better decisions about their money. " "The reconversion has winners and losers," he pointed out about the economy as a whole and the ecological transition. "This has affected us in our flesh and it has been painful," he has settled.

Calviño has leveled another veiled criticism of the banking sector. Specifically, he referred to the plan to support the solvency of companies, which included the signing of a code of good practices by which banks committed to certain measures to lighten the financial burden of companies affected by the crisis sanitary. "There are 28 entities that have not adhered to the code of good practices, clients must be aware of the entities where they have their savings and their contracted loans," said the second vice president of the Government.

The vice president has advanced during her participation in this forum that the Government is preparing a plan "against financial fraud", although she has not outlined details about this reform. He has pointed out that it is about fighting against the "increase we are seeing" in cases of financial fraud, "especially linked to crypto assets." He has linked the increase in these crimes to a context of low interest rates. "The impact may transcend and affect the confidence of the sector as a whole," he warned.

The Minister of Economic Affairs has been questioned by different issues that the Government has on the table, such as pardons for imprisoned Catalan politicians, the increase in the Minimum Interprofessional Salary or the new electricity bill. On the first of the issues, Calviño has assured that "confidence and political and economic stability is an asset and everything that can contribute to that stability is in principle positive for economic recovery."

Regarding the Minimum Wage, it is one of the matters that keeps Calviño herself away from the Minister of Labor, Yolanda Díaz. The person in charge of Economic Affairs has avoided going into detail on this matter and has limited herself to pointing out that "prudence and determination should be the principles that guide us", recalling the commitment that by the end of the legislature 60% is reached of the average salary, but without confirming if this year there will be any improvement. "The experts' own report confirms the complexity of determining an objective for this year in an environment of high uncertainty. It is necessary that it does not jeopardize the momentum of economic activity," he concluded.

Finally, regarding the new electricity bill and the possibility of a temporary VAT reduction to cushion the rise that is taking place, Calviño has acknowledged that the Government is evaluating "temporary measures", although it has avoided confirming that a suspension of the taxes is going to be the definitive decision taken.

Among many other issues, Calviño has also addressed the complicated situation that the Government has regarding Sareb, popularly known as a bad bank, where the bank's problematic assets were kept during the previous crisis. In recent months, the possibility that the Government, the first shareholder of this company, has gained in full, will end up taking over the entire stake, freeing up the banks. Calviño has regretted that Sareb is "an inheritance of the response that was given to the previous crisis." Within his team at the Ministry, some voices have been very critical of how this process was carried out and the valuation that was made of the assets. Now, Calviño recognizes that they are considering "how we can improve the operation of this institution to allow a maximization of the recovery of the enormous financial aid."

As did other businessmen last week such as José María Álvarez Pallete, president of Telefónica, or Ana Botín, of Santander, the chief executive of BBVA has recognized the optimism that exists regarding the economic recovery in Spain. "Vaccination is progressing very well in Spain and makes us more optimistic than we were a few months ago. The data will beat all forecasts," he pointed out, arguing that growth will exceed 6% in 2021 and 7% in 2022.

Torres supports this optimism in the data received by the bank itself on the use of cards in commerce. "The POS show us that consumption is growing, even above pre-COVID data," said the manager. "The indicators show us that we are on the right track," he emphasized. The manager has taken the opportunity to request "structural reforms" in Spain in line with European aid plans. In this sense, he has argued that the Government should encourage private investment accompanied during the stimulus package that comes from the European Commission. "The private sector must play a fundamental role to stimulate and multiply these aid," he stressed.