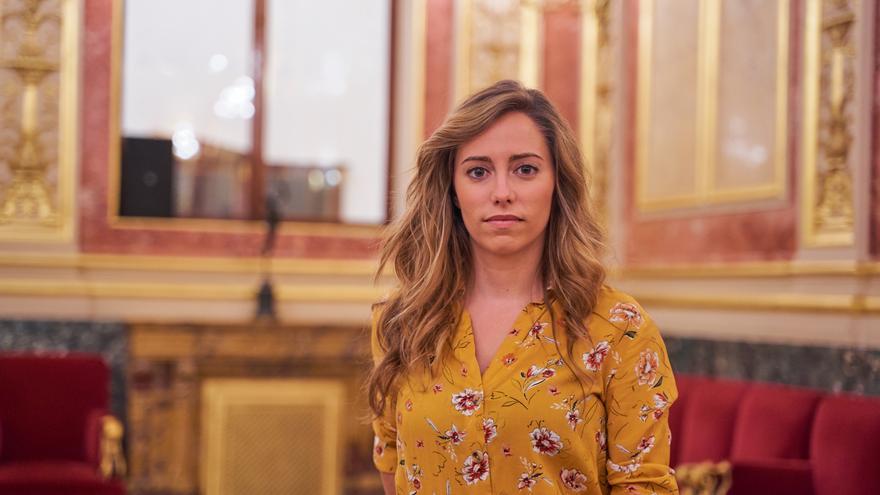 Granddaughter, daughter and niece of Alicante dressers, María Teresa Pérez (Petrer, 1993) began in politics by appearing in the primaries of Podemos for Alicante, she was a congressional deputy with only 25 years old and landed last February in the direction of the Institute of Youth (Injuve), a complicated institution to manage in times of COVID-19. The irresponsible attitudes of some have blurred the solidarity initiatives and the economic difficulties of a group that has chained two consecutive crises in a decade.

From the Youth Institute they have tried to counter the stigma with good press, but the difficult thing comes with the arrival of the new normal: a scenario with greater job insecurity, problems in rent, educational uncertainty and facing the psychological consequences of a group of “They have stolen his future and now he is required to renounce his present.”

The youth collective is in itself something difficult to define and define. How would you define it?

Youth increasingly corresponds to later ages, because everything forces us to postpone life projects. But with regard to the COVID-19 crisis, his role in the explosion of intergenerational solidarity that occurred at the beginning was fundamental. A multitude of young people were willing to share what they had and what they could altruistically: from help on-line in the studies and psychological support, even accompanying the elderly to the supermarket, the pharmacy, etc.

For the most part, youth have shown that they are supportive and that they are available to society when needed. We from the Injuve wanted to recognize and thank this attitude by compiling various initiatives in what we call Youth against the virus. In some cases they were particular and specific, but in others they were carried out through the youth association movement.

Do you think these community networks have been overshadowed by social stigma?

Social stigmatization has always been a factor of youth discrimination and I believe that it is also a reactionary idea because it is not true that previous generations were always better than the current one. Each generation responds to its time, its concerns, values ​​and problems. In this second phase of the pandemic, the priority is to stop the outbreaks and prevent these irresponsible behaviors – which exist, but are a minority – from becoming the majority.

It is important to influence this message of responsibility, how important individual behavior is for a collective good. The key at this point is to raise awareness rather than punish. It is not okay to stigmatize young people, I think it is unfair and ineffective.

What is institutional communication doing to prevent this from happening? There are many campaigns that put youth at the center of the bullseye, but few that use it as an example. Do you miss having your references?

The first thing to do is to regain the confidence of young people in the institutions. Make them more open and sensitive to their reality so that they feel identified with them and heed the recommendations. In the specific case of the pandemic, we have to appeal to the responsibility towards his family, towards his grandparents and grandmothers.

The referents play an important role in generating that awareness, which is why I think the attitude of some is irresponsible, such as that of the singer of Taburete, since they should be the first to have a much higher level of responsibility, because they are an example to follow. But the vast majority of society and youth reject these behaviors and I even think it is brave to denounce situations such as that concert or crowded bullrings, which are scandalizing and scary.

Youth groups have complained that these negative comments have come from the mouth of some politicians. Would you say that there is a generation gap from within?

What I know is that it is a mistake to look at youth only as a stage of life or as a group that is passing through with characteristics associated with that age that make it more reckless or irresponsible. It’s not okay to generalize, ever. My main objective is to ensure that young people position themselves as their own political subject, with the capacity to influence the public sphere and that they speak for themselves. They do not speak on behalf of the elderly or anyone, as the elderly who do not speak on behalf of the youth either. What happens is that you have to listen to them.

And vice versa, should the Injuve take more responsibility for the inappropriate attitudes of some that blur the large photo and harm the collective in general?

Let’s see, it cannot be ignored that there are certain minority irresponsible behaviors, in my view, as there are in other groups and in other sectors. Family reunions and work centers that do not comply with the rules are also affecting the outbreaks. regulations and any area that is not complying with the recommendations of the health authorities, and the entire sector is not in charge of these. That is why I say that the key to all this is to raise awareness rather than generalize, stigmatize and punish.

But it is true that during the central summer months nightlife has been an important focus of community transmission. Should it have been foreseen from the authorities?

First, we would have to do self-criticism and think about what we have offered to the youth so that they can relate leisure to discos and gambling houses. There are no healthy leisure alternatives, but now it serves to criminalize them and use them as a scapegoat. We forget that it is a group whose future has been stolen and now it is required to renounce its present and its own youth. You have to work on attractive and healthy leisure alternatives. The key for me is the participation of young people in communication campaigns, and this also has to be supported by opinion makers, influencers and the media: less stigmatization and more support.

Is this summer 2020 a sign that healthy leisure, or another type of leisure, does not exist in the imagination of many young people?

Yes it exists. It is non-formal education, educational leisure that is done for example in camps, in colonies, in workshops and not only in summer, throughout the year. There are many associations, even companies, that are dedicated to this and that benefit four million young people. There, values ​​of solidarity, companionship, common good and social justice are generated that perhaps do not arrive in formal education. What happens is that we must give much more importance and support to all these centers from the institutions.

The return to the classroom is being the theme of the summer and the problems that were seen during the confinement still exist. What are the consequences of teens seeing this year as lost again?

The administration has to guarantee resources and we cannot allow that digital divide to exist, which already existed, but now with the risk of increasing. Our goal is to protect public education to guarantee equal opportunities and that any neighbor’s child, regardless of family, has access to this social elevator that allows them to be whatever they want to be.

It is true that the health emergency has revealed that, for economic and digital reasons, not all students can access the same type of education and therefore cannot now access the career or higher education they wanted. All this has weighed them down and if they have to postpone their plans for the future, we should try to make all the resources available.

Is there a risk that a situation similar to that of the 2008 crisis will be reversed?

That generation of young people, to whom when our fees were raised, our scholarships were lowered and we left the race paying double the tuition than when we entered, we still dragged all that. It is not possible to continue in this way, quite the opposite. And so it is being done. The Ministry of Universities has greatly increased investment in scholarships and is focusing on vocational training, FP, and on ensuring that any student has the same possibilities as another with a higher income.

How would you say that living two crises in a row affects you emotionally?

Spanish youth are in hopeful pessimism. Pessimism, because he sees that his future looks black and it is difficult to envision a dignified life horizon, but hopeful because he cannot allow himself to throw in the towel and wants to bring the energy of youth to improve that future. As soon as he is aware of the obstacles, he has everything to win. Due to the double crisis in just over a decade, Spain already had a huge debt with its youth and after COVID-19 that debt is increasing.

Injuve published a study that said that young people will be the most fragile group at work after the end of the ERTE. Is there awareness about how the pandemic affects young people, in addition to how young people affect the health situation?

We already know that young people are the group with the greatest risk of poverty and social exclusion and the one that has most experienced the effects of the economic slowdown of the pandemic. We did a study called Risk youth, which said that the ERTEs have been an important temporary umbrella, but that now allows young people to have a greater risk of losing their jobs before the end of the ERTEs. And everything is due to a dual labor system that hires them in precarious times, in good times and expels them at low cost when consumer crises come and that generate a structural precariousness that is very difficult to reverse. So that is why I insist a lot that the most important challenge for this country continues to be to offer a decent future to young people.

Just before the pandemic, teenagers led several crusades for the environment, feminism and LGTBI rights with which they opened newspapers and were called to world summits. Can you go from applause to discredit in just a few months? And above all, can it be reversed?

We celebrate this August International Youth Day under the motto The commitment of youth for global action. This year we must also thank all those young people who have been leading social movements for a long time to move towards a fairer and more sustainable world. I believe that we must stop to reflect and know how to take advantage of all this youthful potential, that energy, that restlessness and that capacity for social transformation instead of turning our backs on it. But I don’t think everything was thrown to the ground. There are many young people who continue to fight every day in volunteer work, in small neighborhood groups or in associations to advance democratically. And that cannot be ignored because there are some irresponsible behaviors.